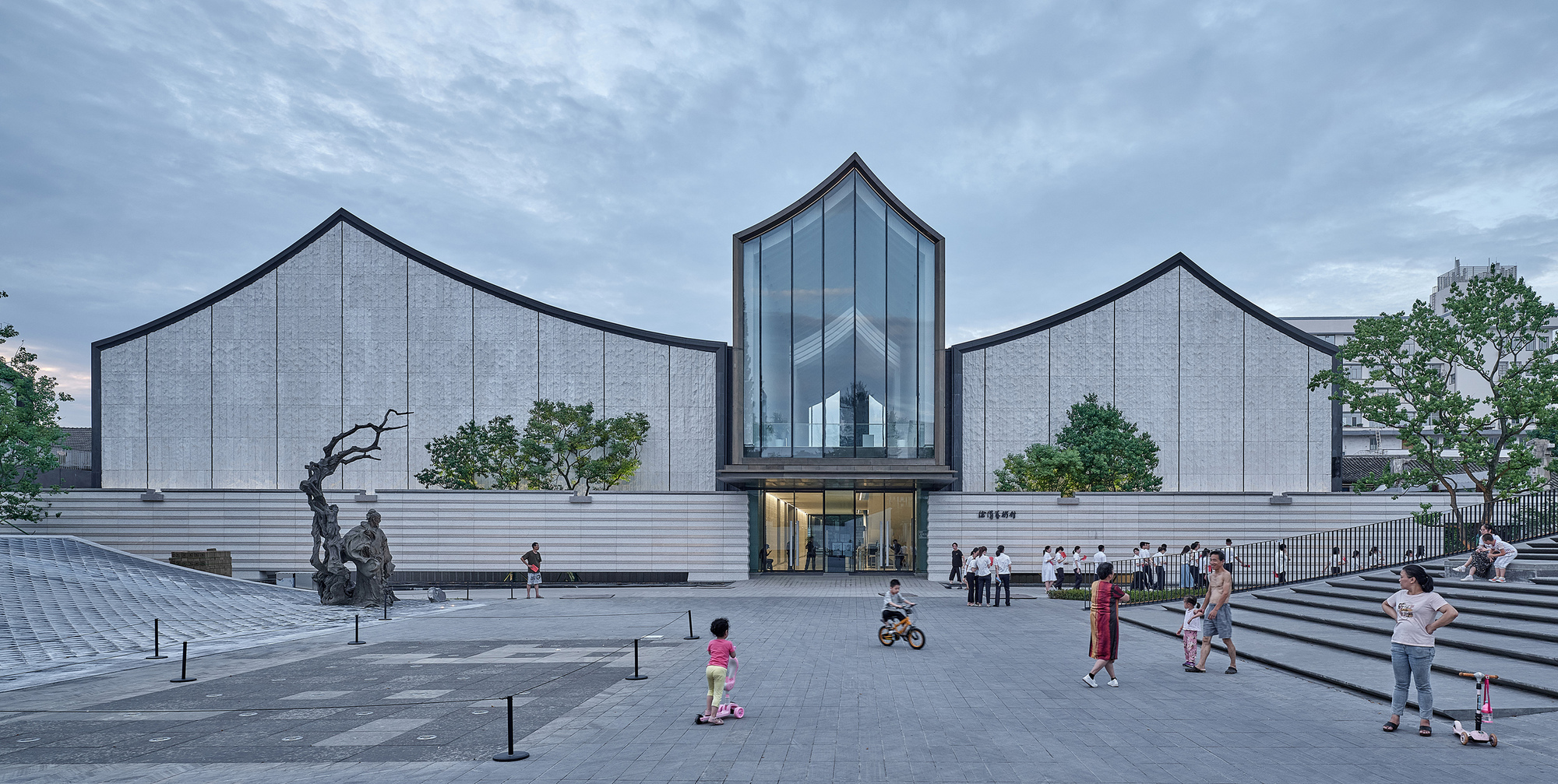 Text description provided by the architects. Xu Wei Art Museum and Qingteng Square are a very important part of our practice project in the ancient city of Shaoxing, and also a key action in the “See Qingteng Again” urban renewal plan. As the main venue of the “500e Anniversary of Xu Wei’s birth and opening ceremony of Xu Wei’s hometown, “they were officially put into operation in May 2021.

In fact, the concept map of the art museum took shape in the first site survey, which absorbs the essence of the construction and gardening of the Qingteng Bookstore, and offers some thoughts on the notable public cultural buildings in the renewal. current of the ancient city: we try to establish a kind of new spatial expression, with a view to connecting the surrounding built environment mainly based on the small scale of traditional dwellings, meeting the requirements of contemporary art exhibitions for the large space, and discussing the subject of “modernity in history in context”.

Five longitudinal entrances and open gardening. Xu Wei Art Museum is located in the former Shaoxing Machine Tool Factory, north of Qingteng Bookstore, Xu Wei’s former residence, and in the middle of Houguan Lane. First, we take inspiration from the combination of large spaces of the old machine tool factory and adopt the construction logic of “longitudinal five-entry slope modeling and horizontal three-rafter unequal”. The two floors of five entrances on the east and west sides serve as the main exhibition space; the middle floor extends over two floors, opening the longitudinal model with five entrances; and the ground floor is a foyer crossing north and south, while the common room and small temporary conference room are located on the second floor. The shared space on the upper and lower floors also serves as a transfer hub between the exhibition halls on both sides.

We have arranged an interior courtyard on different flat floors on the east and west sides, which reasonably separates the volume of space from the exhibition hall and improves interior permeability. And meanwhile, the garden design of rocks and waterfalls surrounded by greenery also offers visitors more opportunities for viewing and recreation in addition to participating in the exhibit.

Black edges and superior consistency. Besides the means of treatment of the space, the contemporary expression of intention of the traditional Shaoxing style is also reflected in the refined selection of materials: the black metal texture unfolds from the roof along the herringbone sloping house. to the end of the second floor on the east and west sides, and the solid walls of white granite are chosen above the second floor in the north-south direction; the first floor is concave on four sides for repeated coating of the unified texture of the herringbone cross slope, the curtain wall is processed locally according to the function and unified modulus, and the gray granite and curtain wall materials are unified. The building features black, white and gray tones typical of Shaoxing as a whole, with local white space and a three-chevron positive sloping contour line, which together create the intention of the contemporary landscape.

We especially keep the old walls at the east and north ends of the machine tool factory and compare the fully transparent glass curtain wall and the white stone slab of the art museum, so that time can create tension. in the space scene.

Located on the south side of the site, Qingteng Square connects the art museum on the north side with the Qingteng Bookstore on the south side, paving the way for the atmosphere of the frontcourt, and in the meantime serves as a reception center for the function. distribution of the crowd. The Square continues the construction logic of the Art Museum, and “raises” two herringbone slopes respectively on the east and west sides: the west side is slightly raised to enclose the square, while the east side is slightly higher. With the help of a local recess, the volume of the Visitor Center is cleverly hidden under the herringbone slopes.

The plaza as a whole is paved with dark stone, and the west side creates a scene of flowing water with the help of a slope. Meanwhile, an original “Xu Wei statue” stands on the southwest side of the art museum and on the northeast side of the slope, making it the visual center of the square and the perspective of the museum of art. And the step-like frame at the start of the eastern slope serves as an auditorium to provide a suitable venue for distribution and gathering.

At the same time, with the help of the space creation technique of “transformation of the point of view”, the “continuous litter” is formed in the change of point of view constantly moving and changing, and a spatial experience. complete and unified and a printing sheet are built for the visual. and the psychological integration of architecture and landscape – this is called the landscape spirit which originated in Jiangnan.

Public art space in the community. As urban renewal and the protection of old towns become more and more topics of post-meal gossip, we hope to present our thinking through design: how the contemporary public art space intervenes in the cultural context of the city. old, integrates and influences the life of the citizens, and thus completes the initial reconstruction and the prospect of the “future traditional community”, improves the quality of the living space in the region and gives it a new vitality.

Mr. Xu Wei, obsessed with calligraphy, became a master intentionally or not. What we did was nothing more than take a brush and ink to create a vast, crazy and acceptable landscape, accessible to ordinary people, imaginary as a place but in an architectural reality.

The government of Punjab uses available resources to promote art and culture; Focus on the well-being of artists