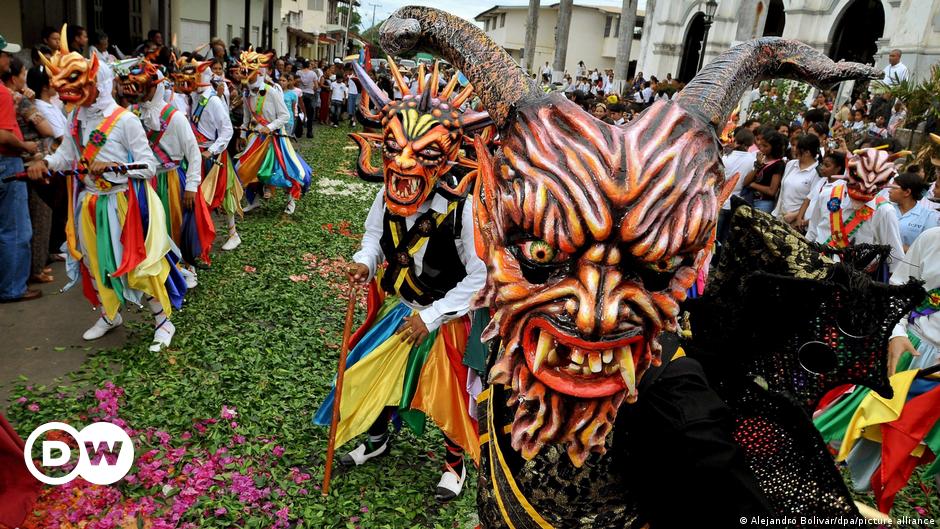 UNESCO adds traditions to its List of Intangible Cultural Heritage | Cultural | Reports on the arts, music and lifestyle of Germany | DW

On December 15 and 16, UNESCO added dozens of traditions it deemed worthy to be cherished and preserved to its list of intangible cultural heritage.

Here are a few of them.

Dances and expressions associated with the Corpus Christi festivities

Panama’s Corpus Christi religious festival, which celebrates the body and blood of Christ, combines elements of the Catholic tradition with music, theater, and burlesque performances involving colorful costumes and masks.

One of the main performances takes place the day before the festival and depicts a battle between good and evil, with an archangel confronting the devil and his legion. The participants then dance in a procession led by a priest carrying the Eucharistic bread, or host, which in Catholic tradition represents the body of Christ.

Festive cycle of devotion and adoration of Saint John the Baptist

In Venezuela, the feast of Saint John the Baptist is accompanied by drums, dances, stories, songs and processions dedicated to the saint.

The celebration is rooted in Catholicism but is also deeply linked to other forms of expression passed down from sub-Saharan Africa, as the tradition was developed by Afro-Venezuelan communities under colonial rule in the 18th century.

The exact dates for the cycle of festivities vary by region; in many communities they begin in early May and end in mid-July, culminating on June 23 and 24, the latter marking the day of the saint’s birth.

A nora artist in the southern province of Narathiwat, Thailand

Nora’s performers wear long metallic nails that stick out of their fingertips and colorful costumes, headdress, and wings that make them look like a bird.

Through theatrical acrobatic dances and improvisational chants, accompanied by ensemble music, nora’s performances depict stories about the past lives of Buddha or other legendary heroes.

The more than 500-year-old tradition of southern Thailand has great cultural significance for local communities as this art form enables them to strengthen social bonds and develop regional music and literature.

Performed at home, in public, and in religious spaces, rumba is a dance and musical genre that is part of all types of celebrations, including mourning rituals.

Women have played an important role in the development of the religious and romantic styles of rumba.

Rumba is an essential element of the identity of the Congolese people, all generations finding a common language in tradition.

Beyond Books: Arabic Calligraphy is an art with infinite potential for diversity, from embroidery to calligraffiti

The 28 letters of the Arabic alphabet, written from left to right, take four different shapes depending on their position in words and sentences.

Traditionally, he uses calligraphic ink made from a mixture of honey, black soot and saffron; natural materials are also used to make qalam or reed pens.

The training of falcons – along with various other birds of prey – is a tradition dating back over 4,000 years, with records detailing how it was practiced in different parts of the world during the early and Middle Ages.

Initially, hawks flew for food, but the art of falconry has since developed into a social and recreational activity allowing people to connect with nature.

Practiced in various parts of the world – including Germany and many European countries, but also Asian countries such as Kyrgyzstan, Mongolia or Korea, as well as various Gulf countries – falconry consists in creating a link between the falconer and the bird through reproduction, training and rearing. .

Tbourida, a Moroccan horse show, dates back to the 16th century.

Dressed in period costumes representing their tribe or region, horsemen often give spiritual significance to the event, in which customs are learned through oral tradition and observation.

These elongated wooden boats were built by the Aboriginal peoples of the northern regions for almost 2,000 years and are a trademark of Viking shipping.

Boat builders still use traditional techniques today, attaching thin planks to a keel and reinforcing the boat’s hull with frames.

Clinker boats were traditionally used for fishing and transportation, but today they are mainly used in traditional festivities and sporting events.

Social practices related to the clapboard boat include ceremonies held prior to a maiden voyage. Traditional songs are also associated with their sail and rowing.

Erewhon embarks on the clothing game and other news – SURFACE