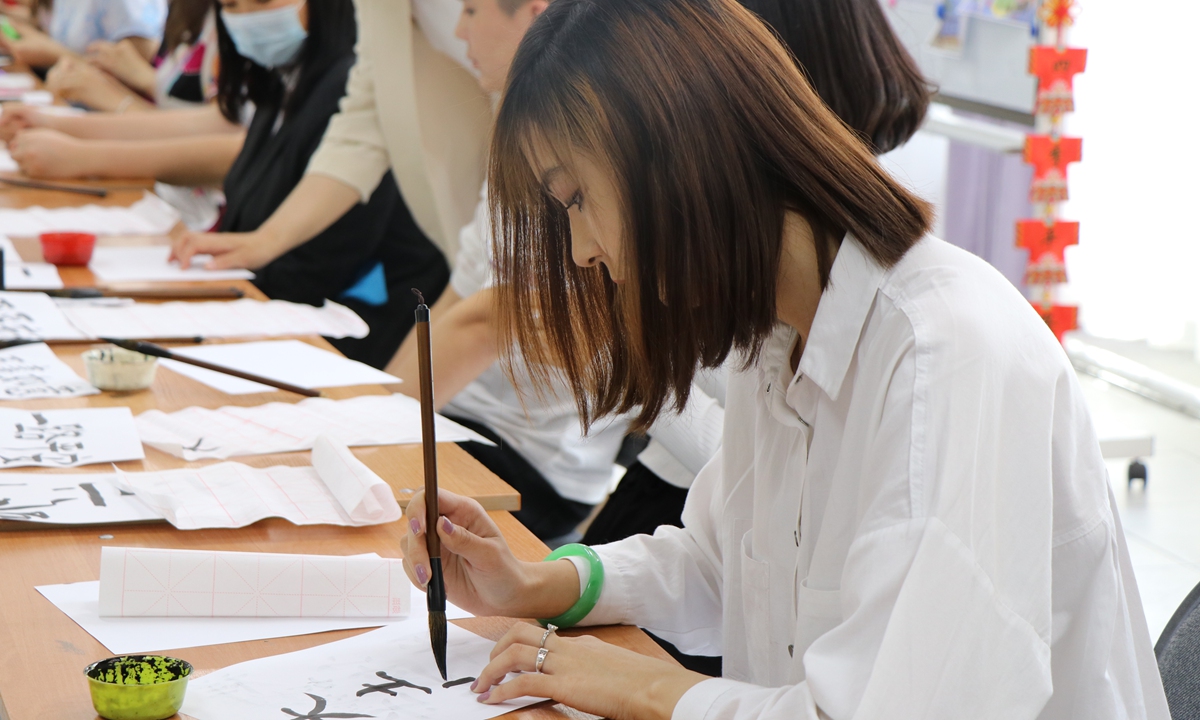 Students write calligraphy during a cultural event on the occasion of the United Nations Chinese Language Day in Almaty, Kazakhstan, on April 15. Photo: Courtesy of Chinese Consulate General in Almaty

The 13th United Nations Chinese Language Day was celebrated on Wednesday. More than 300 embassies and consulates, Chinese educational institutions and enterprises from more than 100 countries have held various activities to promote Chinese language and culture to the world.

The day was set for April 20 because it is the date around which Grain Rain, one of the 24 solar terms of the traditional Chinese calendar. Grain Rain was a day to celebrate Cangjie, a legendary figure traditionally considered the inventor of Chinese characters, because when he created them, “the sky rained millet”.

As the day approached, institutions around the world organized various activities.

The Chinese Center for Language Education and Cooperation (CLEC) and Chinese Plus launched the International Chinese Language Day with the theme “Together for a Bright Future”.

In the UK, the Confucius Classroom at Sainte-Thérèse Primary School in Lisieux, run by the Confucius Institute at the University of Ulster in Northern Ireland, held a Chinese cultural experience event on 8 april. Photos show a Chinese teacher dressed in a panda costume greeting students as they enter the classroom. The students were very surprised to see the panda, giving it pats and hugs.

“We believe ‘Chinese culture’ should be holistic and include both traditional and contemporary elements,” Nick Liu, director of the Confucius Institute at Coventry University in England, told the Global Times.

“This is the crucial point for many overseas Confucius Institutes. In the past, we mainly shared traditional Chinese culture like taijiquan, calligraphy, etc. But in the future, we should show overseas Chinese culture lovers the face of today’s China. For example, collaborating with AI and technology experts to share their designs, or inviting architects who design China’s urban areas today to present their modern visions of China. Creative events and products on historical Chinese culture are also expected to be showcased overseas.

The Confucius Institute at Moscow State Linguistic University held an immersive “Colorful China” cultural experience on Saturday, in which teachers introduced students to the origin of Chinese Language Day and the 24 solar terms. .

Shah Nishith Avinash, who studied at a Confucius Institute, started his own business by opening the India China Academy in India. He told the Global Times that they also held an activity for academy students on Tuesday.

“We tried Chinese food together and played a game that asks students to guess the meaning of some exotic Chinese vocabularies like coffee, canape and calories. We had a lot of fun,” he told the Global Times on Wednesday.

An Indian student who attended the event told the Global Times on Wednesday that she started studying Chinese at the age of 40. As a tea seller, she has many Chinese customers, and she hopes to be able to communicate with customers without the help of translators.

Zhang Yiwu, a cultural studies professor at Peking University in Beijing, told the Global Times on Wednesday that the Chinese language is becoming increasingly popular around the world thanks to China’s increased international influence.

He pointed out that China’s economy has developed rapidly in recent years and its stronger international business cooperation has led to a strong demand for people in other countries who can speak Chinese and understand Chinese culture.

According to a report released by CLEC, by the end of 2021, more than 1,500 Confucius Institutes and classrooms had been established in 159 countries through international cooperation, with more than 13 million students participating. Additionally, 76 countries have included learning Chinese in their national education systems and more than 4,000 universities have established Chinese-related departments and majors.

Currently, more than 25 million overseas people are learning Chinese, while the cumulative number of people who have studied Chinese is close to 200 million.

David Kolosov, a 29-year-old Russian who started learning Chinese in China in 2007, expressed excitement early Wednesday for a speech he would deliver online for International Chinese Language Day 2022 at the UN later in the night.

He told the Global Times that Chinese opened a door to another world for him as the language has the most native speakers and is also one of the oldest languages ​​in the world.

“I’ve been in China for almost a decade, which means I’ve spent about a third of my life so far in China. It’s become an indispensable part of my life. It’s like characters Chinese composed of countless intersecting horizontals and vertical strokes. It takes a lifetime to taste its charm. There are still many things I don’t understand, and I will continue to study hard.