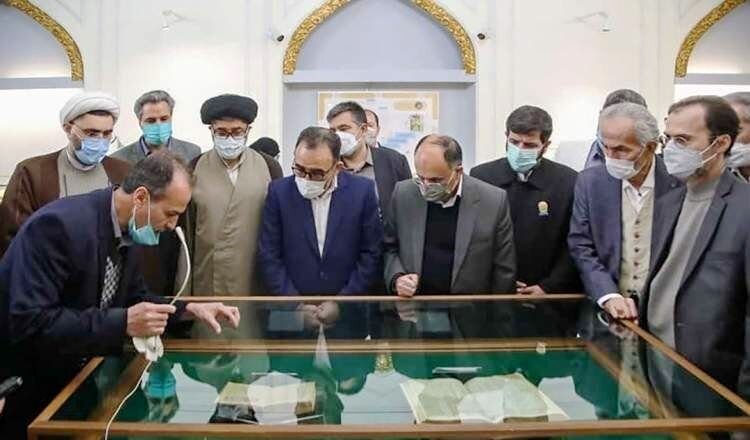 TEHRAN — Two rare handwritten copies of Persian poet Nezami Ganjavi’s Khamseh dating from nearly 650 years ago were on display at an exhibition in Mashhad on Sunday.

The ongoing exhibition at the Astan-e Quds Razavi Museum and Library is a prelude to a massive program Iran plans to hold next week to commemorate Persian literature’s greatest romantic epic poet, who brought a style familiar and realistic to the Persian epic.

One of the copies was written in thulth-style calligraphy on 268 folios of 27 lines each. The titles of the chapters have been calligraphed in gold ink and lapis lazuli. The first two pages have been entirely decorated with illuminations.

The other copy was inscribed by Ahmad ibn Mohammad in Naskh, which blends perfectly with the taliq style of Iranian calligraphers. The opening folio of each chapter has been embellished with illuminations.

Nezami’s reputation rests on the Khamseh which is a pentalogy of poems written in the form of masnavi verse (rhyming couplets) and totaling 30,000 couplets.

The collection includes the didactic work Makhzan al-Asrar (The Treasury of Mysteries), three traditional love stories of Khosrow and Shirin, Leili and Majnun, and Haft Paykar, and the Eskandar-nameh, which chronicles the adventures of Alexander The Great.

Rare copies of the Khamseh are kept in Iranian libraries, but the two versions kept in the Central Library of the University of Tehran and the library of the Shahid Motahhari School and Mosque in Tehran have been added to the list of UNESCO Memory of the World Register in 2011.

Speaking at the exhibition’s opening ceremony, Iranian Culture Minister’s Assistant Mahmud Shalui, who is also director of the Nezami Commemoration Programme, said: “Nezami Ganjavi is one of guardians of Persian literature and language, and many programs should be organized. each year to commemorate the great poet.

He emphasized modern society’s need for spirituality and noted, “In all his works, this world famous Persian poet presents spiritual thoughts, which can be useful for the world.”

Iran plans to commemorate Nezami Ganjavi as part of a week-long program beginning on Esfand 21 of the Iranian calendar year (March 12), celebrated annually by Iran as Nezami Day.

Pictured: An expert (L) briefs a group of cultural officials visiting an exhibition of artworks and books about poet Nezami Ganjavi at the Astan-e Quds Razavi Museum and Library in Mashhad on March 6, 2022.