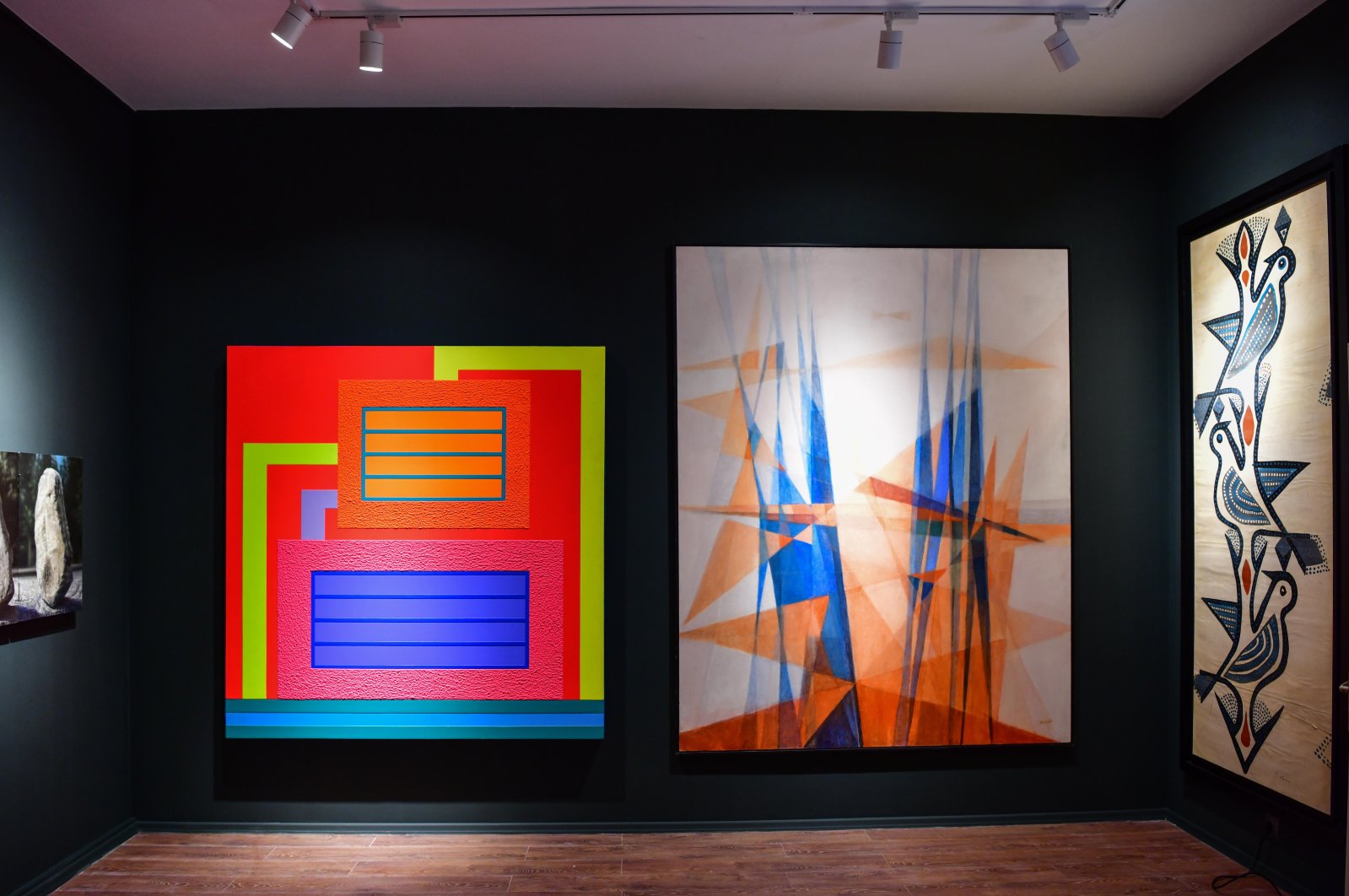 To move a party: On Artweeks @ Akaretler

Despite the bald commercialization climate, Artweeks @ Akaretler’s prolific multi-gallery fairground vibe has some historic, if not entirely critical, academic or curatorial appeal. The collections of so many galleries, and even private companies, are, so to speak, on display, revealing an enviable degree of insight into the history of the art world in Turkey – that a monthly solo or group exhibition could not to encompass due to dedication. its conceptual orientation or its commitment to a specific collection.

In the airy strip of chic apartments in Istanbul’s Beşiktaş district, an assortment of artwork adorns the floors and walls, cleanly presented and timed to coincide with the reopening of the new art season, as the Istanbul’s summer atmosphere cools off and invites people inside, comforted by the opportunity to see the fruits of local creators in dialogue with the international cultural establishment. A striking observation, literally the translation of “Rasat”, a curation by Sinan Eren Erk at Yıldız Holding, concerns a piece by Halil Altındere next to a Picasso.

Last year, Altındere, a die-hard art satire con artist, produced a miniature folding book titled “Sultan Süleyman’s Advocate Going to Friday Prayer” (2020). This is a strong adaptation of the traditional Islamic arts of miniature and calligraphy, a series of 14 watercolors and gold on vegetable-dyed paper with a hand-made “muraqqa” (a miniature painting technique). Most of the paintings show men dressed in lavish Ottoman palace costume walking as they might have done four hundred years ago. But here and there, there are twists and turns of the 21st century.

A man in a robe with a large, conical feathered hat rides an electric scooter, the type normally seen among tourists on their way to discover his very outfit, or likenesses of it, in works of art. art similar to the one Altindere cited for his humorous invention. To conclude the illustrations, a group of multicolored young people dressed in contemporary clothes stand behind a sign that reads “Vegan”. Cognitive dissonance is as brilliant as the artist’s technical precision. The Indian ink sketch, Picasso’s “Picador in the Arena” (1959) has an eastward relevance alongside Altındere’s perspectives.

In this same room is a photograph modified according to the Japanese style “kintsugi” of the broken pottery. The image, of Sarkis Zabunyan (known as Sarkis), depicts the interior of the Hagia Sophia Grand Mosque in Istanbul. The seasoned Parisian artist from Istanbul produced the piece in 2021, although his methods are directly linked to his solo exhibition, “Untitled”, staged at Dirimart at the end of 2020. The decontextualized replay of these pieces, after their institutional curation, could spark debates on art as merchantable objects, a criticism that has raged since time immemorial among artists, dealers and collectors.

Another Istanbul artist, although from a younger generation, has a more neutral, but also personal, approach to the legacy of miniature painting as it reappears in contemporary art. Yuşa Yalçıntaş, represented by Pi Artworks, jumped from the ground of his previous works, experimenting with his curious architectural geometries that touch on themes apparent in the ancient Turkish cultures of Central Asia. Under the title “House Kite” (2021), his figurative design centers a yurt adorned with rugs at the end of kite ropes piloted by children.

When considering the public exhibition of “House Kite” by Yalçıntaş, the importance of Artweeks @ Akaretler increases as a forum for previewing the works of young artists before their official exhibition. This is a glimpse into the still-uncovered worlds of creative adventure, which is particularly spectacular to note after the unprecedented degree of introversion artists use as fertile ground to inspire visionary growth. This organic and worn metaphor is not lost on abstract ceramist Burçak Bingöl, whose installation “Cargo” (2019) is refreshing and eccentric.

As part of the Zilberman Gallery’s addition to the fair, Bingöl’s delicate wooden shelves contain a library of shiny clay items, perhaps once practical cups and jars, covered in layers resembling coral. of what looks like marine minerals, but with a sort of dysphoric discomfort reminiscent of industrial waste sludge, discolored and almost grotesque. Bingöl animates objects with a deadly glow. His ceramics are like bodies exhausted, weighed down and sickened by the massive corruption of materiality in the wake of capitalist overconsumption.

On the other side of the spectrum, Antonio Cosentino, a Turkish artist of Italian descent, reuses found materials to create vessels, crafts, and characters for his fictional universe of stories, maps, and personalities. He is a wide-eyed literary artist with a penchant for history, and his works are the product of his imagined sets, designed from time to time in the context of a performance. One of his favorite materials, tin, forms the structure of his immaculate miniature car, “Ferâre” (2015), parked under his pop-veined oil paint, “Butcher Cemal” (2011).

The predominance of craftsmanship over concept, of fabrication over thought is perpetually supported by artists like Yalçıntaş, an old school draftsman, and by painters, who remain in force on the Istanbul art scene, such as This is evidenced by Artweeks @ Akaretler, particularly in the apartment hosted by X-Ist, where Aylin Zaptçıoğlu’s oils detail his fantastic and supernatural imagination. Her untitled canvas depicts a girl racing an excited dog as her feet are planted in the frozen splashes of puddles. Their monochrome and gray coloring stands out against a pink background.

Zaptçıoğlu’s canvas hangs alongside a quartet of smaller paintings, each exuding the fairy dust of legend, like meticulous snapshots of a teenage mind addicted to tales of fictional lands, artifacts, dreamlike in their phenomenal mirror. In the same room, a trio of oil paintings by Seda Hepsev are more everyday, but elicit a visual sensation of the sublime in the perfectly round textures of his palpable, palpable colors. The knot of a curtain becomes voluptuous in her hands, its contours quite sensual.

One of the most exciting views of Artweeks @ Akaretler is curated by the Pilevneli Gallery, specially to exhibit paintings by Ali Elmacı, Tarık Töre and Erdoğan Zümrütoğlu, whose brash styles stand out not only from their generation, but also of their coloring outside the comfort zones of the aesthetic decor. , but by Pilevneli as a gallery with a powerful voice, bridging the gap where pop art meets critical sophistication. Töre and Elmacı share an affinity for the cheeky, cartoonish portrayal that evokes the sport of video games and social media saturation.

Zümrütoğlu is an abstract expressionist in the broad sense, although he often places more emphasis on the abstract, his color fields are dominated by shifting shapes that seem to bend and assimilate recognizable objects, only to fall into the faded blurs of his palette. generously vibrant, teeming with touches of formal potential that prompts seers to think for themselves of what might have been if the artist had wanted to capture it. But fleeing the absolutism of ready-made semblants is cathartic at a fair filled with mostly rectangular objects that cry out for attention under the blinding white lights of art’s irrational popularity.

Can you tell the difference between Marvel character and font names?