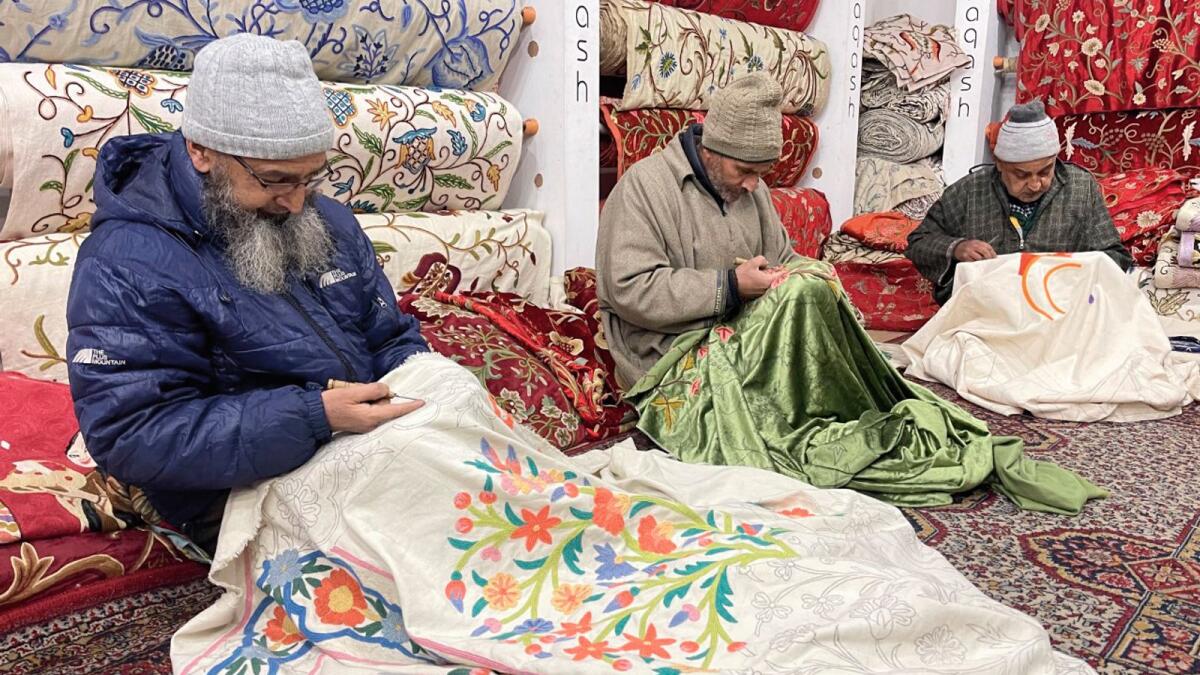 The government is also making efforts to revive the craft and introduce it to the world.

The narrow, dusty lane winding through Srinagar’s old town is dotted with dilapidated wooden and stone houses, leading to a small carpet showroom – no more than the size of a modest bedroom. A treasure trove of finely woven silk and pashmina rugs, decidedly modern in decor, are beautifully displayed on the walls and neatly rolled into the corners.

A silk carpet with a double portrait of the founding father of the United Arab Emirates, Sheikh Zayed bin Sultan Al Nahyan, and His Highness Sheikh Mohamed bin Zayed Al Nahyan, Crown Prince of Abu Dhabi and Deputy Supreme Commander of the Armed Forces of the United Arab Emirates, with an Indian price tag Rs200,000 and a silk carpet Rs700,000 with the name of Prophet Muhammad (PBUH) written in Arabic calligraphy and embossed with ‘zari’ silver work are some of the contemporary designs by Shahnawaz Ahmad Sofi, owner of SS Carpets.

is a fourth generation rug weaver in Srinagar, the capital of Jammu and Kashmir, famous worldwide for its finest rugs and craftsmanship. A fine arts graduate, Sofi, 38, says he’s trying a “fresh and contemporary” twist on centuries-old tradition to revive an industry that has suffered setbacks from Kashmir’s protracted political turmoil and militancy. “We have to move with the times,” says Sofi. “I think these new designs will make a cut in the international market.”

“People associate Kashmiri rugs with traditional Persian or Central Asian designs. We are clearly deviating from these traditions and trying bold new styles,” said the young businessman who is currently displaying his wares in the India pavilion at Expo 2020 Dubai which is running a two-week outreach program in Jammu and Kashmir to promote trade and tourism in the newly created union territory. “It’s a big opportunity that we couldn’t think of until a few years ago.”

Sofi’s enthusiasm to reinvent reflects a desperation to breathe new life into a dying industry. Add to this the popularity of Chinese-made silk yarns and other fake replicas flooding the market, the unthreading of the Kashmiri rug industry is accelerating.

A handful of weaving houses are still struggling to endure long, hard working hours and starvation wages to keep the loom alive. On the first floor of a shabby, dilapidated building in the old city of Srinagar, Irshad and another weaver sit bent over a loom. Sunlight shyly seeps through the windows of the sweltering manufacturing unit where they toil on the loom 10-12 hours a day. “It is a pashmina carpet of 1800×2740 cm. It will take between 15 and 18 months to complete with three weavers,” says Irshad, as his fingers continue to move skillfully across the two horizontal wooden beams with winding threads stretched between them. He earns Rs 300-350 (Dh20 approx) per day – a tiny fraction of the Rs 20-25,00,000 the mat could fetch. “I’ve been doing this job for 20 years,” says Irshad. “It’s the only job I know. Covid literally wiped out all jobs in Kashmir last year and we could barely survive. Now, at least, we have work even if wages have fallen further.

It’s not just the carpet industry that needs a break. Kashmir is also famous for its artisans who do wood carving, crewel work and chain stitch, but decades of insurgency and lack of exposure have led to these crafts degenerating. The decrease in the number of customers and in profits pushes many to take up other jobs. Seventy-year-old Ghulam Nabi Dar, a woodcarver from Safa Kadal, says he hasn’t seen many customers in recent years. “I started when I was 10. I’m still learning even after 50 years in the business. It’s the only job I know, but we don’t get enough clients,” says Dar. carved walnut is among the most important crafts in Kashmir, which today is one of the few places in the world where walnut is still available at an altitude of 5,500 to 7,500 feet above sea level.

Dar hopes that with Srinagar’s listing on the Unesco Creative Cities Network (UCCN) list in 2021, the industry will get a boost. The government is also making efforts to revive the craft and introduce it to the world. For example, the Department of Handicrafts and Hand Weaving of Kashmir has set up “handicraft tours” to offer tourists a taste of the diversity of handicrafts.

The ‘Craft Tour’ which will take visitors through the narrow lanes of Srinagar opens a window into the lives and skills of master craftsmen and weavers whose creations are just as alluring as the apple orchards and snow-capped mountains of Kashmir. Scattered throughout the old town are small, sweltering sweatshops that artisans use to create exquisite works of art in wood, fabric or metal.

In one of these dust-choked manufacturing units, Najar, an old craftsman, shows his skill in the Khatamband, a wooden ceiling worked in a geometric pattern. “I learned this trade from my ancestors. It’s more than my livelihood. He says a task would take weeks because the wood has to be cut and carved by hand into different shapes, then the designs are attached to the ceiling in geometric patterns. “It’s my passion,” he said, alluding to the evolution of his craft and how it’s taken it to far-flung places. He added that the government’s efforts to promote Kashmiri handicrafts will raise interest and awareness in Khatamband.

Mehmood Ahmad Shah, director of handicrafts in Kashmir, said the region is home to age-old art and craftsmanship that needs to be recognized. “We hope these visits will restore the glory of these crafts.”

9 fastest ways to pay off debt, according to experts