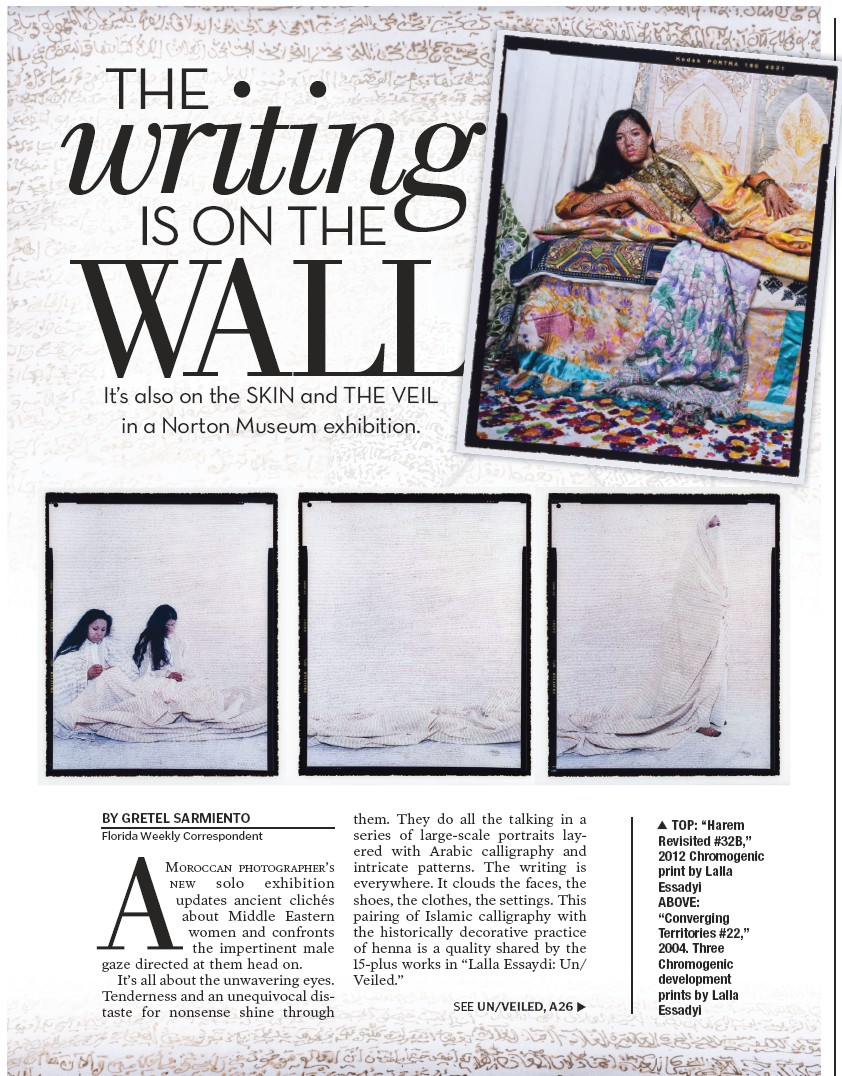 THE WRITING IS ON THE WALL

These are unwavering eyes. Tenderness and an unequivocal distaste for nonsense run through them. They all speak in a series of large-scale portraits covered in Arabic calligraphy and intricate patterns. Writing is everywhere. It darkens faces, shoes, clothes, sets. This association of Islamic calligraphy with the historically decorative practice of henna is a quality shared by the more than 15 works of “Lalla Essaydi: Un/ Veiled”.

An extraordinary amount of strength lies beneath the calm gaze captured in prints such as “Converging Territories #21” and “Converging Territories #25”. Within the gentle expression of both models is a force of nature that controls all emotions and holds them all together, with minimal force. This strength is reflected in the gallery of the Norton Museum of Art housing the pieces until November 6th. 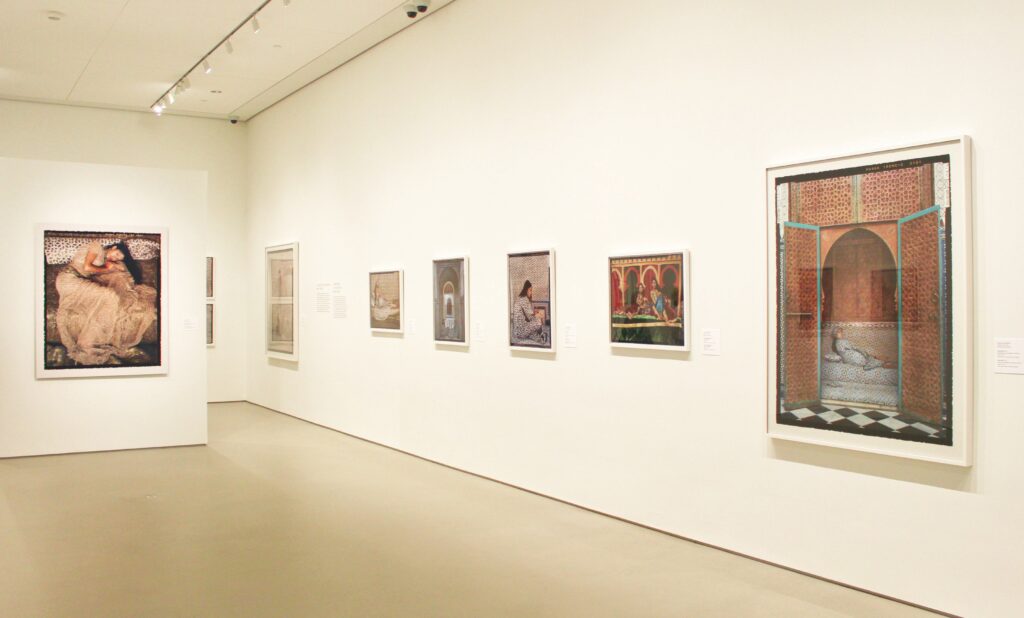 “Lalla Essaydi: Un/Voiled” offers a look at images of modern Arab women through Essaydi’s camera lens, examining the strength and emotions of her subjects. The exhibition is open at the Norton Museum of Art until November 6. PHOTOS BY GRETEL SARMIENTO / FLORIDA WEEKLY

The familiar bowed pose takes a twist in “Bullets Revisited #37”, with bullet casings adorning the model and her surroundings. The lethal weapon is reused as a sparkling accent; his severity reduced to a blingy belt, a necklace. The flashy accessories and the scrap duvet on which the woman lies offer themselves as armor in the service of her protection and her safety. To what extent she will let the weight immobilize her remains to be seen. She seems very in control. 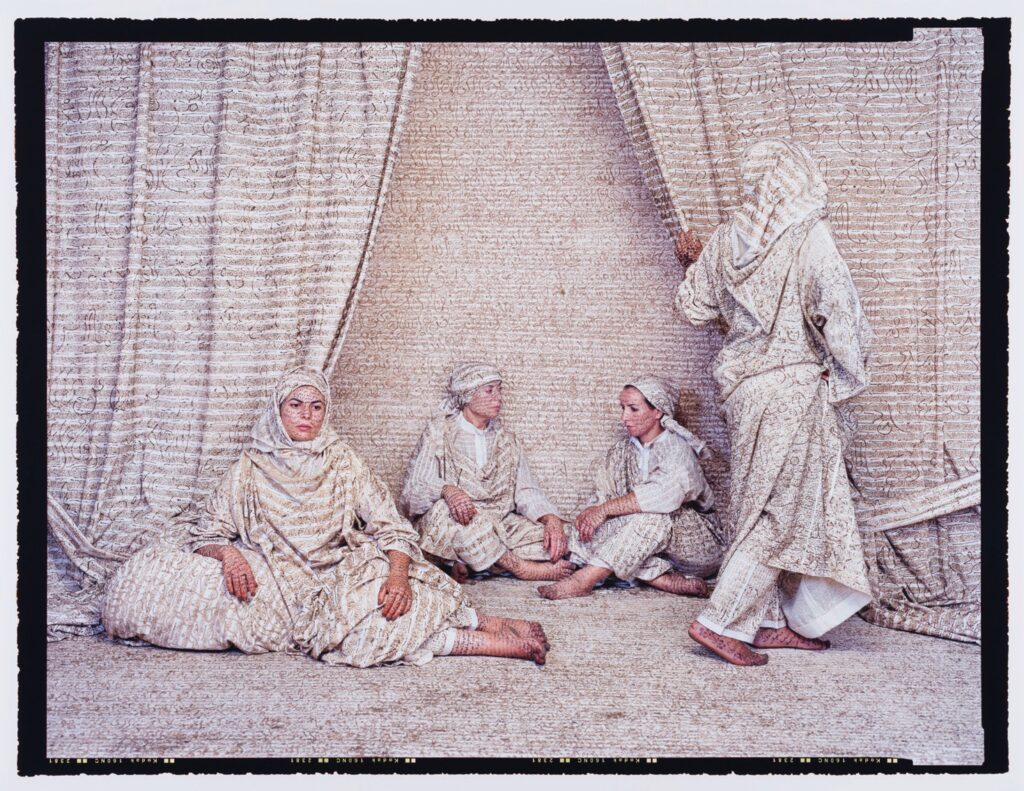 This piece belongs to one of four series covering more than a decade of works by Ms. Essaydi and included in the exhibition. We learn that she returned to Marrakech so that everyone remains in contact with behaviors and spaces relevant to Arab femininity, a definition that continues to evolve.

While the series “Territoires convergents (2003-2004)” delves into the artist’s past to unearth physical and psychological traits from his childhood, such as traditional clothing and the veil, “Bullets (2009-2017)” specifically discusses the emergence and aftermath of the Arab Spring protests and rebellions in the early 2010s.

Later, with “Les Femmes du Maroc (2005-2007)”, the photographer looks outward and goes beyond her lived experiences to unpack Western fantasies of Islamic culture, including the voyeuristic fascination with the harem. The title of the series and the resulting compositions allude to France’s occupation of Mrs. Essaydi’s native country. 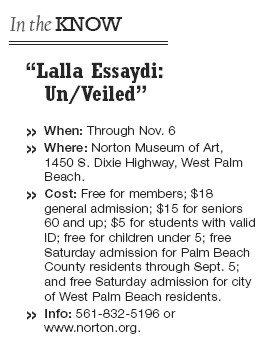 Her criticism is most direct in “Les Femmes du Maroc #1”, which updates a work by French painter Eugène Delacroix depicting a group of Algerian women as sensual and exotic creatures. Delacroix’s “Women of Algiers” were exhibited in Paris in 1834, four years after France invaded Algeria. It is clearly a figment of her imagination and represents the type of fabricated myth that Ms. Essaydi rejects. His version embraces his calligraphic signature and deploys neutral hues instead of the rich palette of the original painting. There is also less visible flesh.

Born and raised in Morocco, Ms. Essaydi grew up in a traditional Muslim household where the harem was an exclusive and restrictive space for wives, children and servants, not the mysterious courtship framed by Orientalism.

In the “Harem (2009)” part of the show, which is the most visually rich, the models disappear into the background. They can’t help it; their clothing features the same pattern as the surroundings.

In adjacent works, she disrupts the harmony between subject and scene by breaking the pattern previously shared by clothing and walls. Here she dresses the models in unconventional ways, caftans or dresses, to reject the old expectations of Middle Eastern women. That confident expression comes back to them – or rather, never leaves them. This mini section of “Harem (2009)” shows the modern attitude of the Arab woman that the photographer wants to make known.

Ms. Essaydi lived in Saudi Arabia and studied painting in Paris and the United States. Each photograph draws on her experiences as a woman and an immigrant to offer a highly personal update on Arab femininity, Islamic gender roles and female identity. A picture is worth a thousand words. Judging by “Un/Voiled,” this photographer has a lot to say. ¦

For a Japanese exchange student, this summer meant experiencing a different way of life!