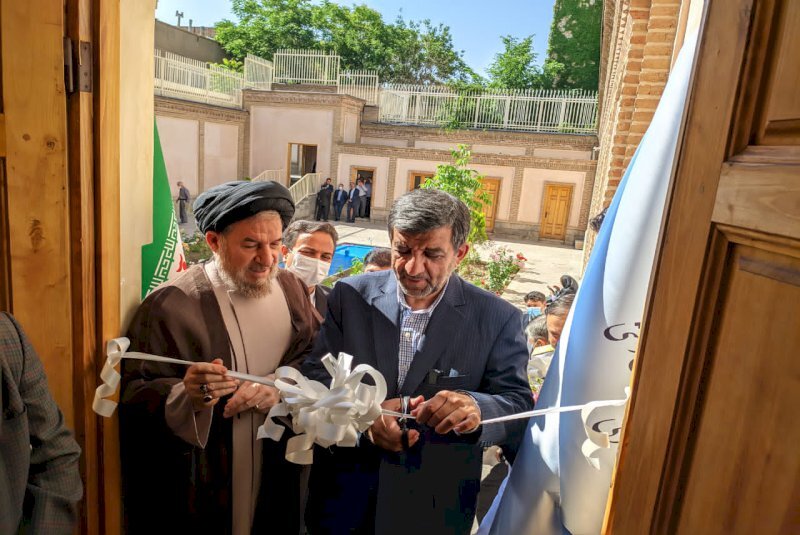 The minister cuts the ribbon for the new miniature museum

The museum exhibited 111 rare works of art belonging to the Tabriz School of Art, CHTN reported on Sunday.

Illuminated manuscript folios of the Shahnameh, Ferdowsi’s epic masterpiece, and a few calligraphies, mostly dating from the Safavid era (1501-1736) are highlights of the museum, according to the report.

The museum, located in the historic Hariri Mansion, also features works by prominent Safavid-era miniaturists such as Sultan Mohammad and Kamaleddin Behzad.

In addition, a temporary exhibition has been installed at the Museum to present the Hariri Mansion, which has been inscribed on the National Heritage List, its architectural features, the restoration process and the Hariri family.

The Tabriz school of miniature painting was founded by the Ilkhanians-Mongols in the early 14th century and active during the first half of the 16th century. According to Britannica, the style represented the first full penetration of East Asian traditions into Islamic painting, an influence that was extreme at first but later blended with the native idiom.

The early works of the Tabriz school were characterized by light, feathery brushstrokes, soft rather than bright Persian coloring, and an attempt to create the illusion of spatiality.

The school of Tabriz reached its peak just as the Ilkhans were defeated by the Timurids (1370-1506), the dynasty of the Turkish conqueror Timur. The school continued to be active during this time, although it was overshadowed by the Shiraz and Heart workshops. However, when the Safavids came to power in the early 16th century, ruler Shah Esmail brought the master of the Heart school, Behzad, to Tabriz, and the school was revived with a drastic change in style.

The figures were individuals rather than types, and the colors were graduated in wonderfully subtle shades. Following the withdrawal of the Safavid court from Tabriz, the school began to decline, and the Qazvin and Isfahan schools then became the centers of painting in Iran.

Steeped in history and culture for millennia, Tabriz includes several historical and religious sites, including the Jameh Mosque of Tabriz and the Arg of Tabriz, and the historic bazaar complex of Tabriz, a UNESCO World Heritage Site, to name a few. The city became the capital of Mongol Il-Khan Mahmud Gazan (1295-1304) and his successor. Timur (Tamerlane), a Turkish conqueror, took it in 1392. A few decades later, the Kara Koyunlu Turkmen made it their capital when the famous Blue Mosque was built in Tabriz.

The city retained its administrative status under the Safavid dynasty until 1548 when Shah Tahmasp I moved his capital west to Qazvin. Over the next two centuries, Tabriz changed hands several times between Persia and the Ottoman Empire. During the First World War, the city was temporarily occupied by Turkish and then Soviet troops.

Crossword: Find out why the age-old art of calligraphy is still so popular

Comparison between the 2022 Honda Pilot and the 2022 Hyundai Palisade