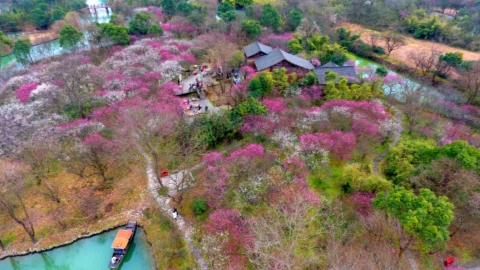 The Legacy and Influence of the Song Dynasty on Chinese Art

The Song Dynasty (960-1279) royal court prioritized the humanities, turning to people’s inner emotions and the minimalist artistic style that were evident in the remaining crafts and artworks.

The minimalist genre has influenced today’s artisans who attempt to emulate the millennial style and show off the ancient aesthetic through art and craft.

At the start of the Year of the Tiger, head to Feilai Peak and the Zhejiang Museum to learn more about the Song dynasty and its lasting influence on Chinese art.

Hangzhou has long been associated with Buddhism thanks to its abundance of Buddhist caves, sculptures and temples. As many of the country’s former officials were devout believers, they dug caves, reproduced scriptures, and erected religious buildings across the city.

Feilai Peak is emblematic of Song Dynasty Buddhist culture in Hangzhou. As the largest cave in the Yangtze River Delta region, it was considered the ideal integration of natural and cultural heritages.

The exhibition at Feilai Peak features 14 pieces of original prints made during this era and 29 pieces made by artists today.

A friction section is exposed. The calligraphy below is the interpretation of rubbing.

During the Song Dynasty, Buddhism combined with Taoism and Confucianism, making the religion more secularized and permeating the fields of calligraphy and carvings.

Ancient scholars invented a rubbing method to reproduce stone inscriptions on paper, which turns three-dimensional inscriptions into two-dimensional marks. The technique developed into a branch of Chinese epigraphy, becoming the only way for scholars to learn about inscriptions carved on caves.

All 14 Song Dynasty prints are on public display for the first time, providing epigraphy enthusiasts with an unprecedented opportunity to get up close to the works.

In addition to Buddhist culture, Hangzhou is also a mecca for porcelain craftsmen. Over the years, a group of first-class porcelain makers emerged in the city. They transmitted the intangible cultural heritage to their offspring and their apprentices who, in turn, made this art flourish.

Subdued shades and quiet simplicity were the main characteristics of ceramics made in the Song dynasty. Ancient artists formed several classic designs which have persisted in national art for centuries. Today, some of them are still the most common types.

A fascinating must-see exhibition of porcelain made by Jin Guorong is underway at the Zhejiang Museum’s Gushan Pavilion until March 6.

The country’s economic center shifted to present-day Zhejiang Province in the Southern Song Dynasty (1127-1279) when Hangzhou was the capital. Royal and folk kilns developed rapidly and cooking techniques reached their peak.

At that time, the Southern Song imperial kiln was established in Hangzhou and dedicated to porcelain fired for the royal court. Their elegant shapes and texture reminiscent of jade were hallmarks of the manufacturing techniques.

These techniques have been passed down from generation to generation. Today, Master Jin’s creations are considered among the best modern replicated works. He spent years training apprentices to pass on his skills.

In an effort to learn ancient kiln techniques, Jin began imitating the intricate century-old craftsmanship in the 1980s, spending years researching and learning firing techniques and the composition of clay.

Jin referred to vintage pieces for inspiration and added modern aesthetics and trendy elements to his designs. He designed a series of vases for the upcoming 19th Asian Games Hangzhou 2022 which will be held from September 10 to 25.

Another Song Dynasty tradition that has prevailed in Hangzhou for centuries is enjoying plum blossoms.

Flowers symbolize strength, resilience and renewal. They are auspicious omens of spring and also a metaphor for the revolutionary spirit. Throughout the dynasties, plum blossoms have been a frequent theme in Chinese art, and appreciating the blossoms is a long-standing tradition in Hangzhou.

Thousands of plum trees in Lingfeng Peak, Xixi National Wetland Park, Hangzhou Botanical Garden and Lonely Hill have begun to sprout. Once the weather warms up, all four spots will be covered in yellow, pink, red and white flowers.

Dates: Until March 26, closed on Mondays

Dates: Until March 6, closed on Mondays