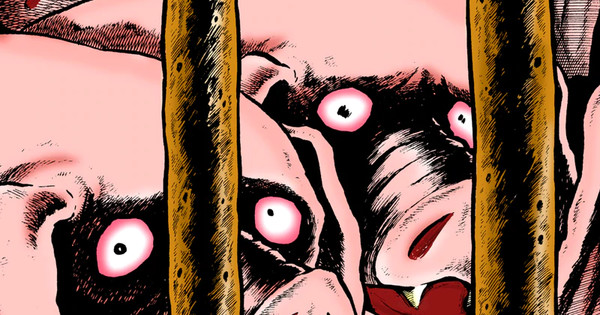 Spoiler Warning: To discuss the background of this manga, the final twist is included in this review.

The city of pigs marks a long-deserved comeback from Hideshi Hinoa central horror manga artist whose work has not been published in the United States for over a decade. Junji Itō has received a lot more mainstream attention in recent years, and we can partly credit that success for reviving western publishers’ interest in horror manga. We finally get some of Kazuo Umezz’s work with the new Orochi versions, but unlike the art of Umezz and Ito which is more aesthetically pleasing, I’m happy to report that Hino’s work is weird looking at.

Hino cut his teeth Garo, an underground manga magazine synonymous with experimentation. Unlike most mainstream artists of the time, Hino’s characters are shamelessly ugly. Kenichi’s large, protruding eyes are quirky, and his sleek black hair evokes comparisons to Peter Lorre. He navigates the ruins of the city that appear to have been drawn with excess black ink onto the page with a calligraphy brush. His pursuers are armored men on horseback who are called demons, not because of their appearance but because of their vicious cruelty.

Although there is a caricatural undercurrent to The city of pigsart, he does not hesitate to stage the brutality of the invaders. They decapitate women and children, exhibit skinned pig carcasses to send a message to potential idlers and generally revel in their destruction. Make no mistake, this may be sold as a manga about demons turning humans into pigs, but the allegory here is one day clear. It’s the war.

The city of pigs is a quick read, maybe 20-30 minutes, with minimal dialogue and a threadless story. A boy, Kenichi, manages to escape the invading “demons” who arrive in the light of a full moon. His family, neighbors and the rest of the town are rounded up and put into wagons to be taken to prison camps. There they are fed mud which gradually turns them into pigs to be sacrificed for manual labor, all in pursuit of building a giant effigy that bears at least some resemblance to That of the Exorcist Pazuzu. Kenichi makes various attempts to escape the borders of the decimated city for nothing, only to discover that he has more in common with his oppressors than he thought.

After completing the volume, readers will likely find themselves at a loss. It’s an allegory but unfortunately Star Fruit Books‘ lacks a vanguard, author biography, or any other context that might help English readers fully appreciate Hino’s story. The final pages show Kenichi spiraling after the revelation that the demons all share his face. He thinks it all makes so much sense now. However, why this makes sense is not revealed to the reader. It wasn’t until I researched superficial information about Hino’s life that this blurred area-the style twist made no sense apart from trying to surprise the reader. Initially, it looked like Hino was using WWII footage to The city of pigs and I assumed that the demons could very well be replacements for the American occupation forces. Until the twist, of course. It turns out that Hino has a very personal experience with Japanese imperialism and, well, with pigs.

I wish this release had included a little biography of Hino in the sequel, not only to contextualize the story but also to make it a more in-depth take on the work of an author who has been overlooked for so long. Some additional information on the importance of Garo and its place in the manga landscape would also have been appreciated. However, this version is not without advantages. Star Fruit Books‘ used white paper instead of cream paper as well as digital printing instead of offset printing. The result is art with a glossier finish and richer blacks than is typical of manga releases. Overall, it packs a little more punch for what is otherwise a smaller page count.

I’m excited that we’re starting to have more variety in the horror manga space and while I wouldn’t consider this a “definitive release”, I hope Star Fruit and other publishers start exploring older works from the Garo Library and similar magazines. There is a wealth of shoujo horror and experimental styles to explore and my shelf awaits.