The art of Japanese calligraphy: fusing tradition and modernity

The Japanese calligrapher Souun Takeda, who pushes the boundaries between the traditional “shodo”Calligraphy and modern art, holds his first European solo exhibition in Zurich. 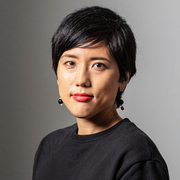 Kaoru is a multimedia journalist who has worked for www.swissinfo.ch since 2017. She previously worked as a police reporter and then political reporter for a Japanese regional newspaper for a decade. When not writing, she devotes herself to tennis and volleyball.

More from this author | Japanese Department

Anyone who thinks that Japanese calligraphy boils down to black and white characters painted on white paper using brush and ink will be surprised by Souun Takeda’s exhibition in Zurich. Many of his works resemble abstract paintings with colorful acrylic paints applied wildly to canvases.

“Because calligraphy is a traditional art – a kata “I used to feel restricted,” Takeda says. He later started drawing with his children’s colored pencils for fun and became fascinated by their energy.

But sometimes the Japanese calligrapher does not use any color. For his work 道 (Path), Takeda used a hose to spray water and write Kanji characters on wet rice paper – a new technique for the ultra-conservative world of calligraphy.

Swiss art curator Peter Wallimann noticed the work at the contemporary art fair Art International in Zurich in 2019, which led to Takeda’s solo exhibition in his Zurich gallery from September 25 to October 24.

Calligraphy – called shodo in Japanese – is a traditional form of writing that was introduced to Japan from China, with Chinese characters. With the birth of kana – Japanese syllabic writing – during the Heian period (794-1192), shodo flourished.

“In terms of seeking beauty in form, color and balance, it resembles Western calligraphy,” Takeda explains. “It is also possible to beautifully write the letter A.”

But Japanese calligraphy is more ritualized: a calligrapher stands in front of a sheet of paper and gently rubs an ink stick to release the subtle and deep aroma of the ink. The artist then dips a brush in the ink and concentrates. Takeda sees a strong connection between calligraphy and the Shinto traditions of Japan.

“Kanji are hieroglyphic letters – reality transformed into an abstract symbol. I bring them back to the original image. The mind becomes transparent and merges with the cosmos, ”explains Takeda.

He began to learn his trade at the age of three from his mother, who was also a calligrapher. Over the years, his attempts to modernize calligraphy, working as a street artist and through collaborations with musicians and sculptors, have garnered a lot of public attention.

The 46-year-old artist believes that calligraphy must constantly innovate: “Needless to say, this is just a Japanese tradition. A foreign audience like the Swiss will never understand that. That’s why he says he always tries to create something beautiful that resonates with his time, like a form of communication.

The art of uselessness

But for many Japanese adults, calligraphy is nothing more than nostalgia for their school years. And with digital developments, a lot of people are no longer writing by hand.

But Takeda remains optimistic. “The world is more and more focused on speed and efficiency. In calligraphy, we do the opposite – there are so many things that are unnecessary, ”he says.

“It makes people feel like they’re focusing on writing a single character over and over again. “

He argues that this is why calligraphy resonates with the younger generations.

“Haste is not always rewarding for the mind. The calligraphy gives a sense of the beauty of the moment and the feeling that we can restrict what is going through our minds right now, ”he says.

“If people feel that right now there is an answer for everything, that everything is right in front of them, then they can find peace more easily.”