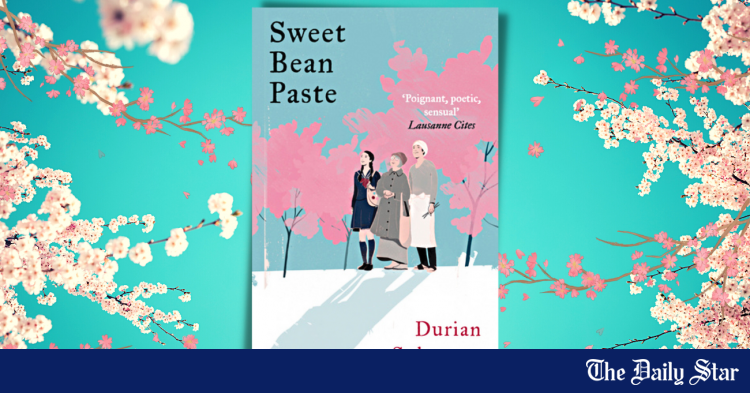 “Sweet Bean Paste” by Durian Sukegawa: on second chances and the plight of leprosy patients

Sweet bean paste (Oneworld Publications, 2013) by Durian Sukegawa is a beautiful and poignant novel that stays in the reader’s heart. A story of friendship and redemption in a ruthless society, it is also a testimony to what should never be repeated.

One morning, a man named Sentaro is accosted by an elderly woman with crippled hands and a paralyzed face. She is Tokue Yoshii, eager to work at the Doraharu Shop. Sentaro is a man who has lost all hope and motivation in life. Previously incarcerated for drug possession, he gave up his dream of being a writer. He makes and sells dorayaki, Japanese pancakes filled with sweet bean paste, at the shop to pay off his debt. He may have a past but no future, just as he has no present, for in his heart he has lost all hope in himself. His conviction made him an outcast and in his society, outcasts do not have a chance but are shunned. Surprised by Tokue’s offer, Sentaro politely but firmly declines it. She is, after all, 76 and also has a visible disability. However, the kind elderly person returns and offers to work at a third of the salary offered, and leaves a jar of delicious sweet bean paste that she made herself.

For all the latest news, follow the Daily Star’s Google News channel.

Sentaro becomes conflicted – Tokue’s sweet bean paste is delicious, it reminds him of his dead mother. He hires her, and the unlikely pair end up becoming friends. When Wakana, a 15-year-old girl whose mother works at the bar, becomes close to the duo, it’s only in Tokue’s patient and caring presence that she can open up about the painful circumstances of her home. Over time, Wakana also learns to open up to Sentaro, as he transitions from his taciturn self to a man who cares about him. Soon, however, we discover that Tokue’s disabilities are the result of Hansen’s disease, commonly known as leprosy.

Through Tokue’s story, the forced separation of leprosy patients from their families and their confinement in sanatoria are brought to light. Many patients were destined to spend their entire lives in various prison-like sanatoria. Although Japan revoked the cruel leprosy prevention law in 1996, families refused to take back their formerly leprosy relatives who were by then fully cured and no longer considered contagious.

In Sukegawa’s novel, Tokue becomes a resident of the Tensheon National Sanatorium at the age of 14. Everything was taken from him at the entrance, including his name, to prevent his family from becoming outcasts. His hands were paralyzed with disease. She would marry but never conceive because her husband had been forcibly sterilized. She would gain the freedom to leave at an advanced age, but the prison-like sanatorium was destined to be her forever home.

Author Durian Sukegawa studied Eastern philosophy at Waseda University and worked as a reporter in Berlin and Cambodia in the early 1990s. He is based in Tokyo. Photo: Collected

Author Durian Sukegawa studied Eastern philosophy at Waseda University and worked as a reporter in Berlin and Cambodia in the early 1990s. He is based in Tokyo. Photo: Collected

In his youth, author Durian Sukegawa (pen name of Tetsuya Akikawa) pondered the meaning of life. He asked others around him, what does it mean to live? Almost everyone he met believed that “to live” was to be a productive member of society; this answer did not satisfy Sukegawa. When Japan abolished the Leprosy Prevention Law, the struggles of completely cured leprosy patients became widely known. Affected by their stories, Sukegawa wanted to explore the meaning of life from the perspective of leprosy patients who were victims of cruel legislation. Leprosy patients have never had the chance to be productive members of society. Sukegawa wondered if their answer to “what it means to live” might be different, and he was right. For them, “living” meant making the most of what life offers, even if what it offers is next to nothing. “To live” means to believe in oneself and in one’s worth even when considered an outcast by society. Sukegawa had finally gotten the answers he was looking for and he wanted to share them with the rest of the world. So the result of her research is this eloquently written novel whose nuances are beautifully conveyed by Alison Watts’ translation from Japanese to English.

Sweet bean paste is a bittersweet, heart-warming tale that celebrates acceptance and hope despite life’s miseries. Through Tokue, he asks readers to believe and accept that every life has meaning, regardless of the situation or environment an individual finds himself in. I think that’s an extremely powerful message. The novel is able to convey the value of human life through its memorable characters despite their pasts and hardships. Additionally, the value of human life is particularly important to consider given the current difficult situation facing the world. The pandemic has plunged the world into chaos and confinement. As Sentaro does, it’s easier than ever to criticize ourselves (and others) without mercy and feel the resentment that Tokue felt in his youth of deficiency and despair. However, it’s also Tokue’s lovable but tenacious persona who reminds us to accept the inestimable value of every life, including our own. Believing that hope and compassion can one day free us, especially from the cages our minds create for us.

Zerin Jannat is an avid reader and dreamer. She holds an MSc. in Economics from Stockholm University and is currently trying to make her way around the world.