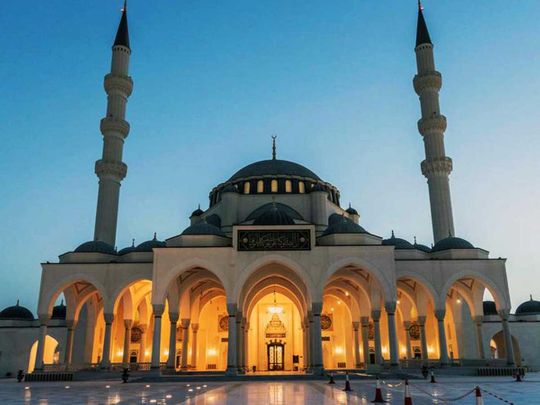 Sharjah Mosque, commonly referred to as Sharjah Masjid by locals, was inaugurated by His Highness Dr Sheikh Sultan Bin Mohammad Al Qasimi, member of the Supreme Council and Ruler of Sharjah in 2019.

The historic mosque is open to Muslims and non-Muslims and was built at a cost of 300 million dirhams.

The fascinating domes of Sharjah Mosque from space. This photo, taken by KhalifaSat, shows the Sharjah Mosque, which can accommodate more than 25,000 worshipers. The mosque is considered a unique model of Islamic architecture.
Image Credit: Mohammed bin Rashid Space Center

The largest mosque in Sharjah, inaugurated by His Highness Dr Sheikh Sultan Bin Mohammad Al Qasimi, member of the Supreme and Sovereign Council of Sharjah, on May 10, 2019, accommodating up to 25,000 worshipers. The 300 million dirhams Sharjah Mosque, located near the intersection of Maliha Road and Emirates Road in Tay region, Sharjah.
Image Credit: Ahmed Ramzan / Gulf News

The mosque is located near the intersection of Maliha Road and Emirates Road in the Tay region, covers a total area of ​​two million square feet.