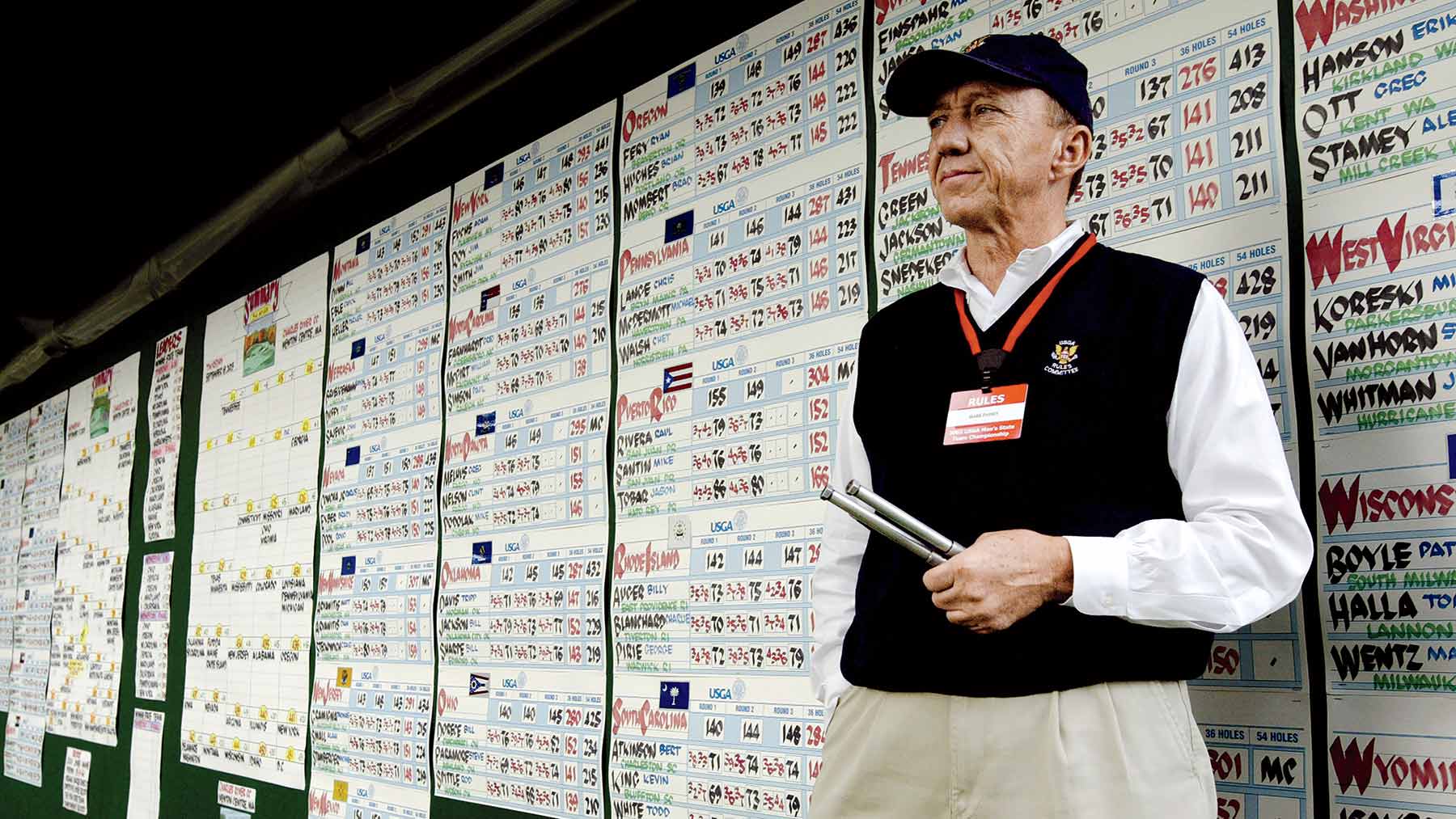 Ray Stansberry didn’t even have to turn around. He knew when Miguel Ángel Jiménez was hiding behind him. The thick smell of cigar smoke still betrayed him.

As the longtime calligrapher of the PGA Tour’s scoreboard, Stansberry was, for many years, one of the Tour’s most popular figures – the man with the pens who posted the scores that every player and sponsor of the tournament needed to see. In an era before electronic scoreboards and ShotLink, hanging around the “board” – as business pros affectionately called it – was the place to be. After all, it was often the only place on the course where the leaderboard data, in neat and surprisingly lavish form, was to be found.

Jiménez was one of Stansberry’s most frequent visitors. At the time, the amiable Spaniard would finish his rounds, pour out a big glass of red wine, light a Cohiba, and walk up to the board, greeting Stansberry with an gusto.”My friend!Then he studied the wall of elegant letters and numbers to see where he was.

Stansberry, known to many players as “Rayzor Ray”, is one of many dash calligraphers who once made a living with his impeccable penmanship, meticulous eye, and gift for quick math. Much like persimmon antlers and balata balls, scoreboard calligraphy has become nearly obsolete due to advances in technology, especially with the megapixel digital screens now scattered across tournament sites and the myriad ranking options available. via smartphone.

But two things can be true at the same time: Is scoreboard calligraphy a dying art, especially on the professional golf tours? Unquestionably. Are we missing his eccentric grandeur? Unquestionably. The mere sight of it conjures up the free, low-tech days of tournament golf and evokes the game’s age-old roots.

Besides, who wouldn’t want to be able to write like that?

Calligraphy in golf scoring is thought to date back to at least the 1950s. PGA professionals were even trained in the art in order to bring a high-end touch to local event scoreboards. Typically, there was a board placed on the course and another in the press area, with a calligrapher and, usually, a few assistants for each.

Most dash calligraphers use four or five pens (red, black, blue, and green are the go-tos), but there’s no one way to practice the craft. Refillable ink markers are an option. The same goes for Sharpies, in bulk – six of each color can be used in a single event. Regardless of the writing implement, ink-stained hands were and still are unmistakable battle scars of the work.

“I always said I was just an adult who never gave up my pencils,” Stansberry jokes.

But it’s not child’s play. Tournament weeks, especially pro events, have been a standout grind. Just putting together a table with players’ names and (sometimes) hometowns – which you didn’t dare misspell – took hours of concentrated effort. Then, on the morning of the first round, the frenetic calligraphy began. Scores came in furiously, especially when a second course was needed to accommodate a wide range of players.

Take the American amateur. Calligrapher Mark Passey held the boards of every US Am from 1990 to 2016 and several US Opens. In amateur events, from 9 a.m. until sunset, Passey would receive nine-hole scorecards for 12 different players every 10 minutes. If play was spread over more than one course, those courses had to be color coded on the board. In addition to the main scoreboard, there were turn-by-turn tables, summary tables, even panels for stats like eagles or holes-in-one. Passey estimates that he inked, on average, 40,000 letters and numbers for each US Am.

The effort was worth it. Calligraphy boards are not only the tour de force of a declining art, they have also long been a natural gathering place, the nucleus of a golf tournament, a buzzing place of camaraderie. And, of course, a key source of information.

“Whether they appreciated the artistry or not, they enjoyed knowing the sheet music,” Stansberry says. “Golf is a traditional sport, and it’s a shame that the tradition of [players and fans] gathering in one place was abandoned.

Stansberry got his start in golf calligraphy as a club professional in Oklahoma. He made boards for local events, earning a reputation for his great work along the way. In 1994 he landed a part-time job with the PGA Tour and became its full-time calligrapher in 1996.

Around the same time, Casey Jones, another master of the form, first fell in love with it. He still remembers that day – a Friday in March 1995. The Nestlé Invitational was held at the Bay Hill Club and Lodge. Jones, then a 26-year-old graphic designer, had moved to Orlando two years earlier in search of work, but that day he decided to play golf. That was the plan, at least—until he stumbled across the board that Tour calligrapher Irv Batten was working on.

“I was fascinated by it,” Jones recalled. “It appealed to everything I loved. I love golf, and I love the scoring side of golf, and I also had the artistic ability to appreciate his work. I just stayed there and I thought, It could be one thing. That might be one thing I could do.”

Batten, the Tour’s staff calligrapher before Stansberry, taught Jones the craft and encouraged him to approach other tours and tournaments to market his services. So Jones got to work, faking calligraphy boards, taking pictures, slapping them on flyers, and mailing them to any tournament director he could find. In the summer of 1996, he started getting answers; in 1997, he had about 30 events on his calendar as he traveled the country to hone his craft.

“It’s on life support,” Jones laments. “It’s something that’s always great to have in a tournament, but I think after a while people will forget that scoreboard calligraphy even existed.”

For Stansberry, the turning point came in 2010. That’s when the PGA Tour stopped funding the boards and cut his staff position. Tournament directors always had the option of paying contractors out of their own pocket to carry on the tradition. And some have. But that work ended up dwindling too.

The boards had almost disappeared at the Tour stages around 2015, a Tour official said. The same goes today for the LPGA, Korn Ferry and Champions tours. The USGA still uses them for some of its events but, in particular, not the US Open.

The LPGA stop at Kingsmill Resort was one of the last holdouts, and it was the only job left in the professional ranks for longtime calligrapher Paul Pope. There was a time when Pope tackled 20-30 events a year, traveling with the LPGA, Champions Tour, PGA Tour and more. He also worked his magic scorers at the NCAA Championships, Solheim Cups and Walker Cups. But the tournament at the Kingsmill Resort in Williamsburg, Va., which was in limbo with uncertain sponsorship, was omitted from the 2022 LPGA schedule. Pope, 60, is of the same vintage as Stansberry (61), Passey (74) and Jones (52).

“We all love work,” says Pope. “Otherwise we wouldn’t have stayed that long.”

Seeking financial security – and, perhaps, seeing the writing on the wall – Jones, in 2003, took a job with the PGA Tour as a scoring official, which he does now part time. His final Tour tip was at the 2016 RBC Heritage in Hilton Head, where he worked scores in the media center for the press. He is 99% certain that this was the last press tent calligraphy board created on the PGA Tour.

These days, Jones takes the tournament haphazardly — mostly at the club level, where the boards still provide a throwback thrill — but he focuses more intensely on his side hustle: creating personalized golf rewards on caseyjonesgolf.com. He recently inked hole-in-one memorial plaques for Justin Thomas and Tony Finau.

Jones’ slice of life on the Tour may be a little on the wane, but the memories live on. He wrote John Daly’s infamous 18 at Bay Hill in 1998. In 1999 he was on hand for Tiger Woods’ first commemorative win and stood just yards away as Woods and the Golden Bear joked on the putting green. In 2000 – when he sometimes wrote the names of champions on the checks of these winning giants – he argued with a tournament staff member who accused him of misspelling Phil Mickelson’s name. . (He hadn’t.) Eight years later, at the US Open in Torrey Pines, Jones encountered some of the loudest roars he had ever heard on a golf course as Woods and Rocco Mediate were fighting on the stretch.

“I feel like I was born to be a dash guy,” he says. “It was the perfect marriage of my passion for golf and my artistic abilities and kind of a random thing. If you asked me in college what I would do for a living, I never I would have guessed that I would pursue a career in calligraphy.

The company goes back in time to ancient Europe | News