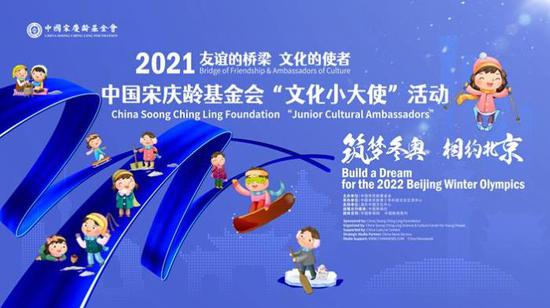 Rendezvous with snow and ice, together for a shared future

After intensive preparations, the 2021 event webpage of the China Soong Ching Ling Foundation â€œJunior Cultural Ambassadorsâ€ was officially launched on October 27, as the 100 days countdown to the Olympic Winter Games took place. Beijing.

The web page is set up on the official China News website (www.chinanews.com), mainly used for posting and polling entries that have passed the preliminary examination. The page also includes columns such as news and information, a display of excellent entries and award-winning works, and the latest updates for the event.

The â€œJunior Cultural Ambassadorsâ€ event, jointly organized by the Chinese Soong Ching Ling Foundation and Chinese Cultural Centers Abroad, managed by the Chinese Soong Ching Ling Center for Science and Culture for Youth, benefits from a strong support from a strategic media partner – China News Service. Since the launch of the â€œJunior Cultural Ambassadorsâ€ event in June this year, 209 video works have been submitted by Chinese and foreign adolescents from 32 countries in Asia, Europe, Africa, Oceania, ‘North and South America recommended by overseas China Cultural Centers, Chinese embassies and consulates abroad, relevant national institutions and foreign embassies in Beijing.

Representatives of middle school students from Yanqing District in Beijing and Chongli District in Zhangjiakou City, host of the Olympic Winter Games, actively participated and submitted various nominations as special guests of the event. Yanqing students exchanged with African students and youth representatives attending the 6th China-Africa Youth Festival at the Ice and Snow Sports Training Center, and together wrote the Chinese character ç¦ ( blessing) to express their wishes for the Olympic Winter Games. They also called on friends from all over the world to participate in the Winter Olympics and join hands “together for a common future”.

Recently, the organizing committee invited an expert jury, which includes Lu Shizhen, Wang Wen, Miao LÃ¼, An Ping, Gao Xin, Zheng Qinyan, to make a preliminary assessment of the applications from different angles, such as l education of young people, exchanges of people and dissemination of information. They also reviewed all of the videos submitted in detail in terms of presentation content, linguistic expression, expressiveness and production quality. Experts praised the entries, believing that the national video pieces fully demonstrate the essence of traditional Chinese culture and showcase traditional Chinese medicine, calligraphy, martial arts, musical instruments and food culture in different angles and in different ways. As they said, the overseas applications were truly impressive, as the teens expressed their respect for the long history of Chinese civilization and their blessings for the Beijing 2022 Winter Olympics.

After the preliminary evaluation, a total of 100 works have been shortlisted and a one-month survey will be held for the public via the webpage and the official WeChat account until November 27th. Based on the results of the online voting, expert opinions and all considerations, the organizing committee will ultimately decide on the winners of the â€œJunior Cultural Ambassadorsâ€ and associated awards.

Link to the event web page:

Link to the voting web page:

In order to strengthen exchanges and mutual appreciation of civilizations, promote ties between Chinese and foreign peoples, better disseminate the excellence of Chinese culture and better tell Chinese stories, The Soong Ching Ling Foundation of China, in collaboration with China The centers and relevant partners jointly organized the â€œYoung Cultural Ambassadorsâ€ event and invited Chinese and foreign teenagers to engage in online cultural exchanges. Under the theme “Building a dream for the Beijing 2022 Olympic Winter Games”, the event has so far received a total of 209 entries from adolescents from 32 countries. Online voting is initiated during the 100-day countdown to the Beijing Olympic Winter Games. Selected â€œJunior Cultural Ambassadorsâ€ will have the opportunity to participate in a series of cultural exchange activities between Chinese and foreign youth.

Learn How To Improve Your Writing With These Five Tips