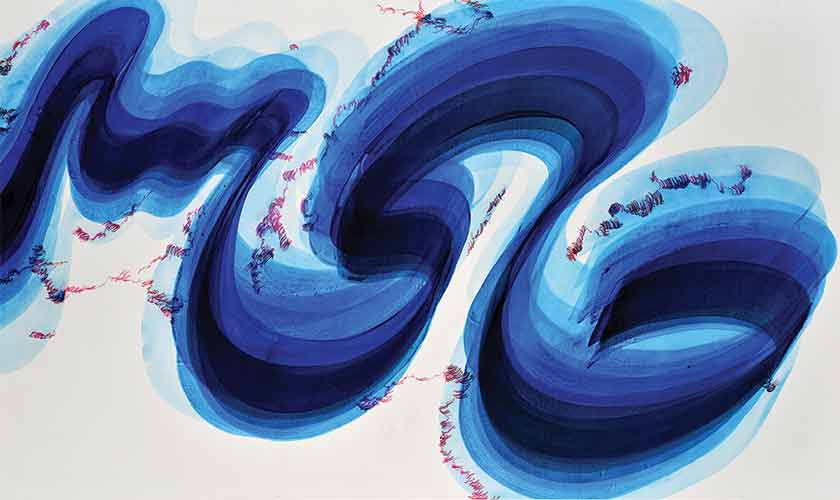 To write is also not to speak. Keep quiet. Scream without sound.

Three years before his death, Umberto Eco expressed concern that we were on the verge of losing an art form. He said, “The art of handwriting teaches us to control our hands and encourages hand-eye coordination. It forces us to mentally compose the sentence before writing it. Thanks to the resistance of pen and paper, it makes you slow down and think.

If handwriting is an art, calligraphy is its highest expression; it transforms letters, words and grammatical symbols from mere vehicles of linguistic meaning into repositories of history, personality and culture. Etel Adnan goes further by saying that “writing is a form of drawing, even if we don’t notice it”.

Abdullah Shah Alamee highlights this shift between the linguistic signifier and the loaded symbol, both rooted in the practice of calligraphy. The medium can also be used to disrupt or expand established traditions, as well as to preserve them. The late Zaha Hadid, the Iraqi-born architect, described her interest in calligraphy as being tied to the categories of fluidity and fragmentation.

In a recent show called, Naghma-i-Besada, at the Tanzara Gallery in Islamabad, Abdullah Shah Alamee argued that each letter, as an abstract image, fulfills a specific meaning and that through their differences in expression, these letters become a source of inspiration. He composes letters inspired by the angular Kufic script and adds calligrams, meaningless marks. Approaching Persian calligraphy through the prism of modernism, he listens to his hand, the call of the ink, and abandons himself to the brush. He wants to free calligraphy from language and the meaning of words, and go back to the moment of its birth, to the universe of signs and symbols, when letters hung between mud and water.

Hurufiya is a term that refers to works of art that deal with Arabic writing/language, letter or text, as a visual element of the composition. Abdullah Shah Alamee’s emphasis on Persian/Arabic words in this context underscores how deeply the love of – modern – literature is embedded in the consciousness of the peoples of the East. The love for the early classics, the odes of the pre-Islamic or Arab poets Zuhayr and Mutanabbi, for example, is summed up by Elias Khoury in his epic novel Gate of the Sun where the narrator describes what such poetry means to him: “I like the melody that makes the words spin in their rhymes and rhythms. I like the rhythm and the way things resonate with each other and the reverberation of the words. When I recite this poetry, I feel an intoxication that is equaled only by the intoxication I experience when I listen to Umm Kulthoum. That’s what we call tabab.”

For the modern period, the poet Faiz Ahmed Faiz particularly stands out. His innovative use of language and powerful sense of history made him one of the most beloved poets of the Orient. The recent exhibition of calligraphic paintings in Alamee takes its title from a verse by Faiz: Mera Dard Naghma-i-Besada / Meri Zaat Zarra-i-Benishaan… Drawing inspiration from the structure of the script, Alamee is one of the few artists to transform the script into, essentially, images of words. Going beyond the word, he says: I believe in using visual elements in a painting as raw material: Persian writing can be part of that. I don’t think a painting becomes Persian through the use of Persian script. The identity of the painting comes from several elements, not just from the writing or the ornament.

Can this now ubiquitous use of script be described as a movement, just like its counterpoint like marks and scribbles? To what extent is Alamee’s work still consciously tied to a Persian/Afghan Muslim identity, or in some cases an open rejection of Western figurative art? In recent years Alamee, who was trained as a miniature painter at the National College of Arts in Lahore and exposed to Western artistic traditions, has begun to seek inspiration from aspects of his own indigenous culture.

It was not only the Persian script that was adopted as a medium and transformed into art; Alamee is also fascinated by “the notions of text, signage and the visual appearance of language”. The works presented in the exhibition have many stories to tell. One can detect there a new love for calligraphy and the art of the book itself, which has a long tradition in the region and is in the process of radical transformation. The fascination with the structure of letters and the words themselves is also evident. Finally, powerful messages contained in these works scream and haunt us.

By drawing from the rich play between word and image, historical and contemporary, popular and iconographic forms, Alamee has no longer only contributed to Iranian art, but to art itself. Because he has best crystallized the fullness of the calligraphic effect, a moment when the letter, the word, the line and the text cease to be vehicles of meaning and slip into the pure visual meaning of the brushstroke.

For Alamee, a letter is not just a shape or form, but has a spiritual quality that paves the way for meaning given that Persian writing, like music, is a finely tuned abstract vocabulary embodying mathematical laws universal, and therefore has the power to have a spiritual effect on the viewer. There is rhyme and rhythm in the intentionally illegible calligrams. Alamee’s wavy, abstract and illegible scribbles show the many decorative possibilities that writing offers.

Deeply inspired by Hasaan Massoudy, who has staged dozens of performances, Alamee sang to a group of visitors on the gallery’s opening night while dabbing black Persian ink on gold sourdough canvas. flat. Like his mentor, Alamee attempted to introduce a new approach to calligraphy. Whenever our poetry reflects pain, it uses blunt, thick instruments that block space. When a singer chants in a voice charged with emotion, he performs with slow and solemn gestures, and when the voice rises in anger, his hands accompany it with frantic haste. Calligraphy helps to control the body’s energy and channel it into precise movement. When the words rise, rise and are light, we can fly with them. Sometimes, perhaps several moments in a row, the calligrapher becomes master of himself.

Inspired by the shapes of Persian letters, Alamee describes himself as an architect of words, seeking to make letters as poetic and plastic as possible. His characteristic style is the use of simple words or short sentences, whether the thick ultramarine strokes evocatively suggest a steep, winding road in Jag Sahar Aayi Hai / Chand Nay Mujh Say Kaha or the burnt shadow script repeating the letters for their intrinsic beauty, rather than for a particular meaning as in Meri Umr Ka Bemanzil or Aaram Safar. Alamee was particularly inspired by calligraphic worksheets in which the page is made black with the ink of repeated letters called siah mashq. Alamee incorporates the script into his almost abstract works. Poetry inspires him but is deliberately beyond readability. This draws our attention to the question: what exactly is the meaning of citing Iqbal, Rumi and Faiz as the titles of the exhibited works when the chosen letters in their poems defy readability? Are these works a kind of visual interpretation of the text? What kind of relationship is woven between text and image through these paintings?

The writer is an art critic based in Islamabad.

2023 Hyundai Palisade trim levels: Which is the best?