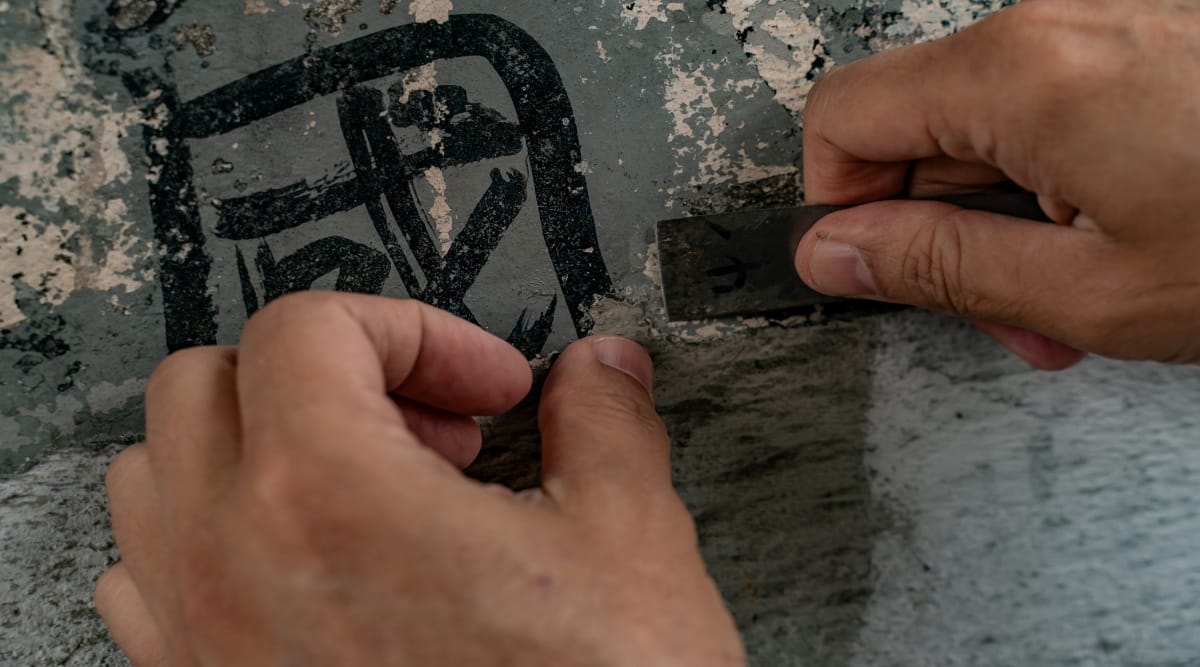 Often bare-chested in the summer, smelling of sweat and ink, the aggrieved artist writes constantly and everywhere: on the walls, underpasses, lampposts and traffic light control boxes.

He covered Hong Kong’s public spaces with an expansive jumble of Chinese characters that announced his unwavering belief that much of the Kowloon Peninsula rightfully belonged to his family.

During his lifetime, graffiti artist Tsang Tsou-choi was an ubiquitous figure, well known for his eccentric campaign that struck mostly as a particular personal mission, not a political rallying cry.

But Hong Kong has become a very different place since Tsang’s death in 2007, and his work – once often spotted but now largely disappeared from the cityscape – has taken on a new resonance in a city where much political expression has been wiped out by a sweeping campaign against dissent since 2020.

“During his life, especially at the beginning, people thought he was completely crazy,” said Louisa Lim, author of “Indelible City: Dispossession and Defiance in Hong Kong,” a new book that examines the legacy of Tsang. “Even at the time of his death, no one was really interested in the content or the political message of his work. But in fact, he was talking about these Hong Kong concerns long before others did – territory, sovereignty, dispossession and loss.

When a decades-old work surfaced earlier this year, it began to draw a crowd in a setting that could hardly be more mundane: a concrete railway bridge, built over a roadway and adorned with ‘a simple registration number and a warning against graffiti.

The bridge is near a bird market and a sports stadium on Boundary Street, a road that marks the boundary of territory ceded by the Qing dynasty to the British in 1860 after the Second Opium War. It’s coated in gray paint, some of which peeled off this spring – how exactly remains a mystery – to reveal a palimpsest of Tsang’s work from several eras of painting at one of his favorite sites.

Lam Siu-wing, an artist from Hong Kong, said he passed through the Boundary Street work during a night walk in late March.

News of the find began to spread, with When In Doubt, an artist collective to which Lam belongs, describing his find as a rare treasure. The group noted that it was one of the first artistic creations to spark debate on a critical and increasingly pressing question in Hong Kong: Who owns the urban space?

While the legitimacy of his territorial claims is debatable, based on his reading of his own family tree, Tsang has become something of a popular ruler in his own right; he is now widely known as the “King of Kowloon”. His death at age 85 received extensive coverage in local media, with some newspapers covering their front pages with rarefied characters reserved for royalty.

Despite his fame, his works were often smeared by city workers tasked with keeping graffiti at bay.

But even as his art faded, the issues he addressed became more relevant and heartbreaking, permeating the pro-democracy protests that engulfed Hong Kong in 2014 and 2019.

And while many of these protesters were too young to have ever known a city covered in Tsang’s work, they also covered public places with their own slogans and painted symbols of Chinese authority in the Legislative Council and others. government buildings.

“Again and again over the years his ideas seeped into the soul of the city through calligraphy, seeping into his veins,” Lim writes in his new book.

The 2019 protest graffiti has now been almost entirely erased, although “Be Water” – a Bruce Lee mantra embraced by protesters – and other messages can sometimes still be seen faintly on walls and walkways.

Likewise, little remains of the thousands of works by Tsang that once covered the city. A few, especially objects he made on paper and other more portable mediums, have been sold at auction. M+, Hong Kong’s new art museum, has more than 20 of his works in its collection, including a pair of ink-painted wooden doors.

But many more are hidden under paint on the streets of the city.

Tsang received only a few years of formal education, and some experts felt that his writing, done almost entirely in brush and ink which he used by the gallon, was not calligraphy in the Chinese tradition. formal. Yet his work was featured at the Venice Biennale in 2003 and his pieces sell for up to $100,000.

Researchers say the style of his work, which is replete with ancestor lists and place names he claims, was likely inspired both by the writing primers he used as a child and by the text-heavy advertisements that filled the city in the mid-20th century.

Over the years, efforts to preserve Tsang’s work have been piecemeal, with some works having been destroyed through neglect. In 2017, a city contractor painted over an electrical switch box near an arts college, damaging it beyond repair. Officials said others were too deteriorated to warrant protection.

MTR Corp., the Hong Kong transit operator that owns the Boundary Street Bridge, said it was investigating how to keep the site working, with the Hong Kong government saying it was offering technical advice .

Two other pieces of Tsang – a pillar near the Star Ferry Terminal at the southern end of the Kowloon Peninsula and a lamp post outside a public housing estate – were covered in clear plastic boxes more than a decade ago. years in response to growing public demands. preserved.

Willie Chung, a collector who met Tsang in the early 1990s and spent years documenting his work, helped organize a petition to protect the art. But he regrets that there is no commemorative signage to inform passers-by. He has also documented dozens of other sites, but is cautious about publicizing the locations, saying the official preservation policy is still too inconsistent.

“There are still a lot of uncertainties,” he said.

For now, he makes regular visits to check them and add protective coatings. After days of spring rains, he traveled to a handful of sites in east Kowloon. At one o’clock, he pulled out a small wire tool and removed the layers of adhesive that had accumulated from advertisements stuck to a lamp post that Tsang had painted years ago. His figures peeked out from under the gray paint, declaring him the owner of this place.

At another location, Chung crossed several lanes of traffic near a construction site. Puzzled workers wearing yellow hard hats watched him walk past thorny bushes and plastic barriers leading to a series of pillars. He scraped off the traces of dead vines with a putty knife, then a coat of paint.

Little by little, the characters become clearer. “Tsang,” read one. Then above, “China”. Once, austere figures had spread around the pillar and others nearby. For now, they remain almost completely hidden.

“I hope there will be a day,” Chung said, “where we can share this with everyone.”