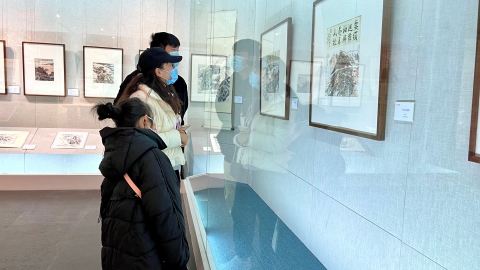 Chinese painting is known for a long history, with mountains and rivers being the main subject since the Song Dynasty (960-1279).

Such paintings not only depict landscapes, but also reflect the inner peace of painters. With brushes, painters show their unique personality and spiritual freedom.

Lu Heng’s calligraphy and landscape paintings are on display at Lu Yanshao Art Gallery until January 9.

Lu Heng, son of Chinese landscape master Lu Yanshao (1909-1993), was imperceptibly influenced by what he saw and began to learn traditional art as a child.

“When I watched my dad paint at home, I was always drawn to the brush in his hand. The mountains gradually appear thanks to the rotation of the brush, while the rivers flow following the ink, ”said Lu Heng. “I was wondering when I could become as accomplished as my father.”

Lu Yanshao praised his son for his gifted, stable, calm and lively spirit, which benefited Lu Heng while he was studying art.

“The great art and simple life of my father inspired me. I was guided to draw doodles by my father, who always encouraged me,” said Lu Heng.

A family looks at Lu Heng’s paintings at the Lu Yanshao Art Gallery.

Bequeathed by her father, Lu Heng has a deep understanding of traditional mountain and river painting.

In the 1970s and 1980s, he had many opportunities to draw around China with his father, thinking, exploring and practicing while enjoying rivers and mountains.

Since then, Lu Heng has continued to explore and innovate, inheriting his father’s style.

Great changes have taken place in mountain and river painting in the modern era, from literary painting to traditional mountains and rivers and the influence of Western painting, as has the theory and practice of painting. mountain and river.

Especially after the founding of the People’s Republic of China, when academies across the country started creating realistic works of art, mountain and river painting changed from high-end traditional art in the form of pyramid within the aesthetic reach of ordinary people, with a group of realistic artists pouring out.

In addition to paintings of mountains and rivers, he tried his hand at painting plum blossoms.

For him, the exhibition is a conclusion of his painting and calligraphy, as well as the legacy and exploration of his father’s art.

“I will always remember what my father told me – inherit, create and style yourself. I will continue to move forward in the field of art,” said Lu Heng.

Exhibition of works of calligraphy and painting by Lu Heng