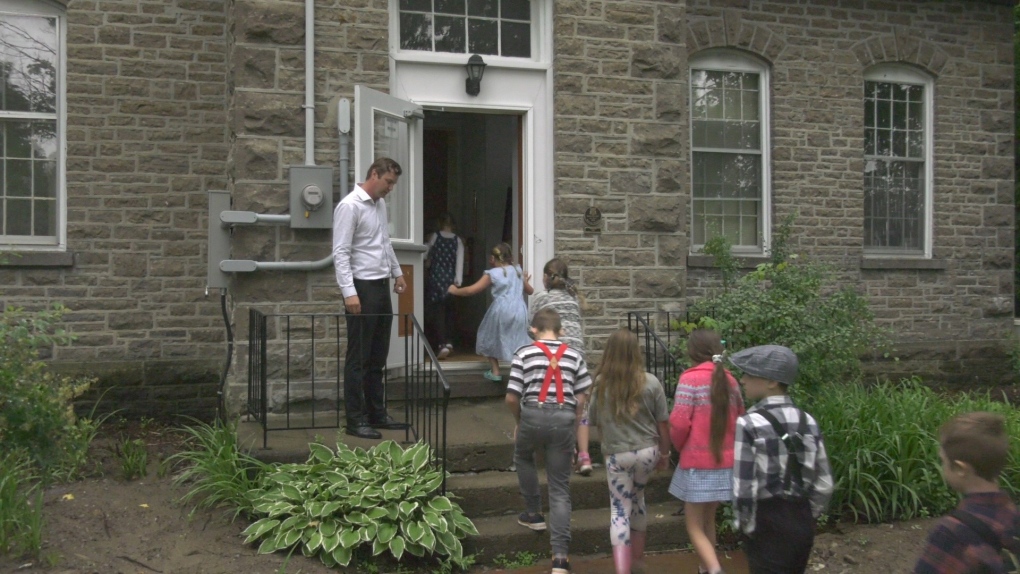 Students in south Ottawa took a trip back in time on Thursday to find out what school classrooms looked like 150 years ago, with the help of the local historical society.

The school bell atop Maplewood Hall, once a one-room schoolhouse in Oxford Mills, welcomed Year 3 and Year 4 pupils from Oxford on Rideau Public School, ready to experience what life would have been like on June 9, 1876.

“Just for today, we are in 1876, the year just after the school was built,” said Professor Steven Paterson.

Students learned about what life was like for Canadians in the 1700s and 1800s, and the old schoolhouse was the perfect backdrop for them to experience this in real life.

“The last couple of months have had students researching life at that time, so a big focus on what a school day was like, hobbies and what a curriculum would be like,” Paterson said.

Inside the room, cursive writing was taught with inkwells and calligraphy pens, and math was done with chalk and blackboards.

“It brings him to life,” Paterson said, pointing to a picture hanging on the wall of his grandfather, who attended the school decades earlier. “You can look in a magazine or a textbook and see pictures, but that doesn’t mean anything until you can touch it and handle it, do something with it, like any subject or way of life.”

Paterson contacted the North Grenville Historical Society to see if they would be interested in bringing back 1876 for the day, and they jumped at the chance.

“This historical society has just offered a children’s program and this was a perfect opportunity to launch it,” said Kerrie Kossatz, treasurer of the North Grenville Historical Society.

“At the moment, they are my guinea pigs today, but it seems to be going well! She smiled.

“It’s great working knowledge,” Kossatz said. “Kids today, everything seems so disposable where we throw our clothes away and it’s great to see that maybe they can learn to mend their clothes, reuse them, recycle them. It’s great to see older things come to light now.”

Some students like Mackenzie Paterson and Emery Wilson, even dressing the role.

“We did a lot of research and for two months we researched what to wear,” Paterson said.

“My mom had this (dress) from a play when she was younger, so I just wore it,” Wilson added.

“That was another area of ​​interest was clothing,” the teacher added. “How students and teachers were dressed at the time so students were encouraged to dress up and many were very excited about it and as you can see they did.”

Outside, the class was shown historic games at recess such as duck on a rock, hoop rolling, hopscotch and marbles.

Even through the rain showers, the children had fun learning the games.

“We joked about it,” Paterson said. “I said this morning there will be a snow storm or a blizzard or rain, you have to go to school one way or another. We are traveling on foot and we took advantage of it to the max!”

Students also learned how to sew and make bannock, a quick flatbread that doesn’t need time to rise.

Gwenda Lemoine, who has a granddaughter in the class, brought historical items to show and tell like a bed warmer and a butter press.

“They know a bit of history,” Lemoine said. “I ran them over the bed warmer, but they had good answers! »

“I just think it’s fantastic, really, that they’re going into this initiative to try to replicate what it was back then,” she said.

“It’s just old stuff that kids might be interested in. I’ve always loved the story and I think it’s great that Mr. P is doing this,” she said. “I wish more people would because it’s important for kids to know where they’re from.”

Lemoine even brought her most prized possession: a musket ball her husband found while remodeling their 150-year-old log home.

“We thought it was from 1772 when we determined the circumference of the log in my house,” she said.

Grade 4 student Walter Hamilton said he learned how difficult it was to live and grow up in those times.

“They didn’t have a lot of money,” Hamilton said. “They only get two cents a day of work.”

Paterson says the goal is to maintain the partnership and have an annual trip to the old school as part of the lesson.

“Learning should be fun and it’s good that they can learn from it and have fun with it,” he noted. “Hands-on real-life experience and just let them absorb it and let the memories begin today.”

“Seeing children come to life, if you had to do it in a classroom and read a textbook, of course it’s interesting, but it can get old and stale,” he added. “Knowing how much they’ve been looking forward to it for two months, asking about it, that’s great.”

However, even with their new knowledge of 1876, 4th grader Easton DeVries was quick to answer whether he enjoys being in a class like this every day.