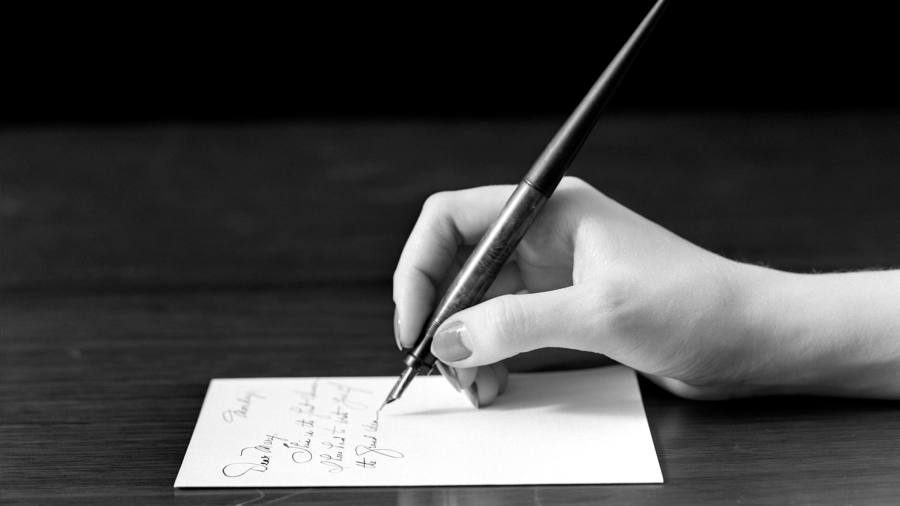 The writer is the FT’s pop critic

It’s exam season and my daughter has two calluses on her writing hand. She sits her GCSE, the qualifications most UK schoolchildren get at 15 or 16. Calluses are the result of weeks of review, measured in reams of paper crammed with French phrases, historical events, mathematical calculations and descriptions of how photosynthesis works – all carefully crafted by her, like a diligent medieval monk in the scriptorium of his attic room.

Schooling is the last redoubt of handwriting on an industrial scale. While the rest of us tap away at screens and keyboards, students continue to rely on the neatly curled letters and hasty squiggles of their calligraphy. My daughter’s calluses exemplify the stubborn endurance of a physical act that dates back to the very dawn of human civilization, when our ancestors transitioned from nomadic hunting-gathering to living in agricultural colonies. “Between my finger and my thumb/The stubby pen rests./I’ll ​​dig with it,” as Seamus Heaney said in his 1966 poem, “Digging.”

But the school stronghold of handwriting is under siege. Online learning during the pandemic has highlighted an educational world in which computerized typing could replace calligraphy. The exams go in the same direction. UK assessment regulator Ofqual recently announced plans to replace pen and paper with online testing. The next generation of school children are at risk of repetitive strain injuries from overuse of the keyboard, not calluses from holding a pen.

Romantics will watch these developments with dismay. Handwriting is a personalized form of writing. The idea underlying graphology, that you can distinguish a character by writing, may be as wrong as phrenology, the idea that a person’s psychology can be guessed by the structure of their skull. But there is some truth in that. Your writing is unique to you.

In a school setting, handwriting symbolizes the personal conditioning a student brings to their learning. This interpretative aspect goes against the trend of British education policy. The national curriculum became Gradgrindian during my daughter’s schooling, treating knowledge as utilitarian information to be memorized and regurgitated. Having students write on computers is a logical extension of treating them like computers.

Rationalists will dismiss all of this as soft-headed nonsense. They will cite the arrival of typewriters in the 19th century as an example of the social progress that mechanical writing can bring. The proportion of female typists grew rapidly in the United States from the 1880s, reaching a near-total takeover of the workforce by 1930. Granted, much of their work consisted of transcribing the words of men – but the machine nevertheless opened up office jobs to my daughter’s ancestors.

Typewriters also had an effect on personal style. One of the first to adopt it was the philosopher Friedrich Nietzsche, who switched from handwriting to typing in 1881 due to eyesight problems. He finds himself adopting a different register, more clipped and telegrammatic than his handwritten prose. “Our writing tools also work on our thoughts,” he observed.

If so, then my thoughts have been digitally reprogrammed. I use a computer to write. The only time I return to handwriting is at concerts, doodling in a notebook in the dark – a preference that marks me as the Methuselah of pop critics. Younger guild members use their phones to take notes, fingers dancing on bright screens. I’m too clumsy to do the same.

For me, handwriting has mostly become a way to communicate with myself. But it is an ineffective form of self-communion. A lot of notes I take during concerts turn out to be indecipherable. If my daughter’s calluses symbolize the stubborn survival of handwriting, then my semi-legible notes portend an ominous future. When pens are banned from schools, all that will remain is a shaky retreat into private writing, with a readership that leans inexorably towards no one.

Orange Credit announces the launch of a low-interest loan