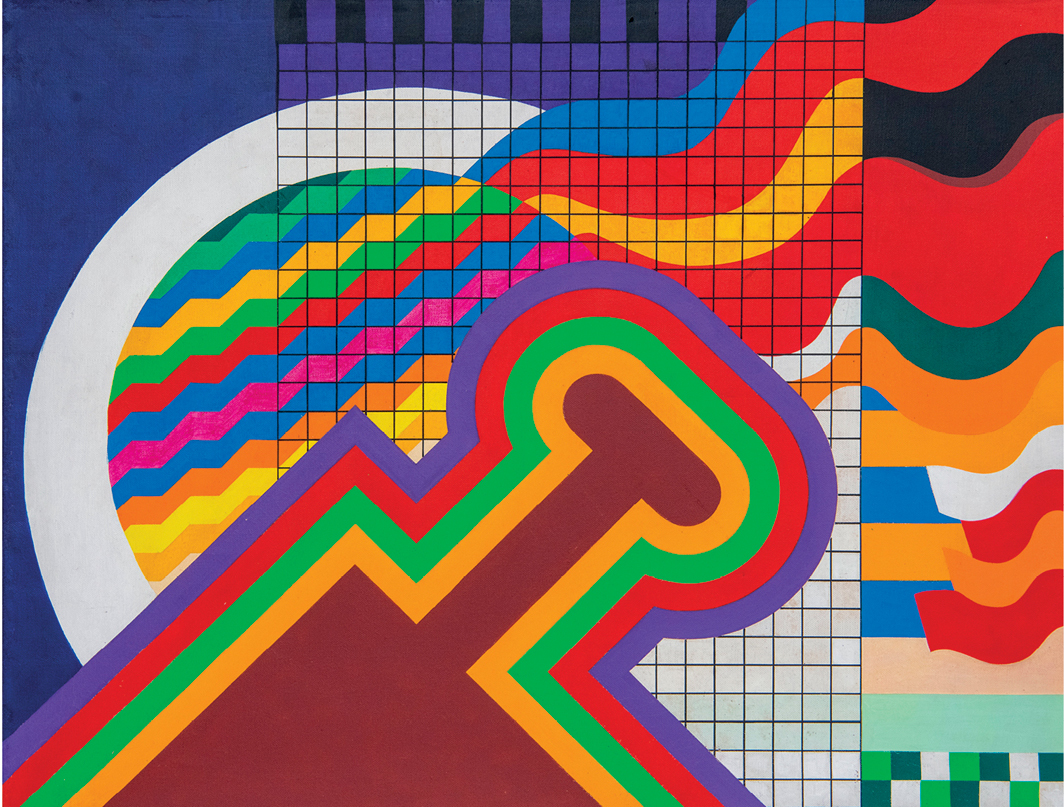 Organized by Fatima-Zahra Lakrissa for the Parisian company Zamân Books & Curating as an extension of the traveling retrospective of Mohamed Melehi, “Visual Consciousness” was the first retrospective of Mohammed Chabâa (1935-2013) outside his native Morocco. Bringing together six decades of paintings, sculptures, graphic art, interior design models and archival documents, it revealed the depth, complexity and influence of Chabâa’s multifaceted practice as a artist, designer and educator.

Born in Tangier, Chabâa, like Melehi, belonged to a generation of artists who grew up under colonial rule but had the opportunity to study abroad. Shortly after Chabâa’s return to Morocco from Rome in 1966, Farid Belkahia recruited him with Melehi to teach at the School of Fine Arts in Casablanca, which quickly became the main center of modernist experimentation and production in the country. . Inspired by the transdisciplinary nature of the Italian Renaissance and the Bauhaus, Chabâa strove in his pedagogy to synthesize the art, architecture and the rich artisan traditions of Morocco, what he called the “3 A‘s ”—incorporating the study of Amazigh textiles and other crafts as well as Arabic calligraphy into its design program. The study of traditional trades, devalued under the colonial regime, was a vector of decolonization and simultaneous localization of education and artistic production.

Organized in four chronological “chapters” and an archival exhibition presenting the design practice of several decades of Chabâa, the exhibition opened with a selection of works by Chabâa produced in Rome in 1962, revealing the influence of abstract expressionism and other post-war avant-garde movements. Using an earthy palette (largely ocher, brick red, and black, with a bit of blue), he experimented with gestural abstraction, but the energy of his flourishes remained limited by the setting. A year later, his work has become flatter, more graphic and colorful, featuring figurative and ornamental elements drawn from rural Moroccan craftsmanship. Exhibiting together, Belkahia, Chabâa and Melehi have become the school of Casablanca. Aiming to directly engage a wider audience, they presented their 1966 debut in the atrium of the Mohammed V National Theater in Rabat. Three years later, the group (along with a few additional members) organized a famous open-air exhibition of their paintings at Jemaa al-Fna Square in Marrakech, the city’s famous central market square. Here, their colorful and harsh geometric abstraction did not represent a departure but a return to their cultural heritage, the tradition of Morocco’s largely abstract arts and crafts offering them an alternative path to modernity.

In a 1974 body of work, painted with cellulose automotive paint on wood panel, bands of bright rainbow-like colors float across sparkling white fields, tracing the straight edges and sharp angles of the shapes. geometric. The bands flare out at each end in unruly arabesques and swirling swirls, like flames or hair in the wind, the formal order opening up to intuitive blooming. The grid made its appearance later in the decade, not as a fundamental structure but as one more ornamental motif obstructing occupied visual fields. Depth reappears in these so-called algorithmic compositions, with grids sometimes extruded into cubic matrices. The final section featured works from 1983 to 2012, the year before the artist’s death. Reiterating many of the idiosyncratic motifs that Chabâa had developed over the previous decade, these pieces were more personal and playful. Rendered with softer contours, textured surfaces, and a sensibility more comic than graphic, they represented a looseness that was both ideological and formal. A series from the late 1990s and 2000s closed the exhibition loop with compositions made up of layers of small calligraphic strokes. But while in the 1960s Chabâa’s brushstroke was exploratory, here he was more assured, filling rather than fighting against the frame.

In a manifesto published in the radical literary magazine blown, the artists of the Casablanca school described their iconic 1969 exhibition as “plastic action», The sentence summarizing their desire for rupture, transformation and liberation that is both aesthetic and militant. Although in retrospect and out of context their art might not seem so radical, their importance in the history of Arab modernism lay in their belief that art could be unmistakably political without sinking into propaganda, as this exhibition subtly revealed. .