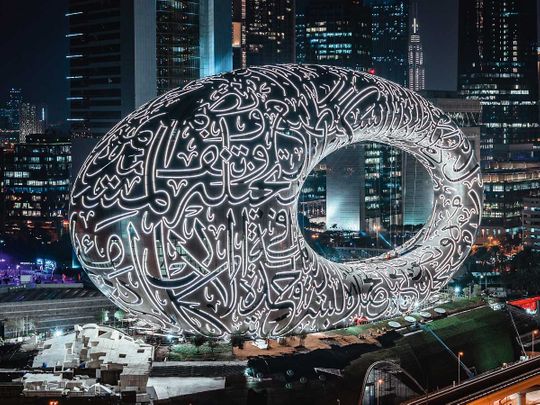 The city of Dubai that thrives on architectural splendour, a building of overwhelming design makes you stop in your tracks. Drive through Sheikh Zayed Road and you’ll be immediately enchanted by its shimmering eye-shaped design with swirling allegorical calligraphy that traces the UAE’s prolific history and forward-looking approach. It’s the Museum of the Future, which captured the world’s attention before it even opened its doors, and for good reason. It’s a technological tour de force that offers a lesson in parametric design, with the entire project lifecycle created using 4D Building Information Modeling (BIM) algorithms – a fast and cost-effective process that digitizes both the physical and functional characteristics of a structure.

Envisioned by architecture studio Killa Design and designed by Buro Happold, the solid part of the torus structure represents the knowledge we have today, while the void represents everything we don’t yet know.

“Only a few facades I can think of create such a striking and lasting first impression,” says Maitha Al Mazroei, Associate Projects Manager at the Museum of the Future, who has been part of the iconic project since the early stages of its construction. “The ironwork is a defining feature of the building’s identity. The 77-meter-high elliptical shape consists of more than 1,000 unique pieces over 17,600 square meters,” she adds.

Maitha graduated with a Bachelor’s degree in Architectural Engineering from the University of Sharjah in 2013 and previously worked at Dubai Municipality in the areas of engineering, sustainability and renewable energy. She then pursued a Master of Science in Sustainable Design of the Built Environment at the British University in Dubai. In 2015, Maitha received the “Young Engineer of the Year” award at the Middle East Electricity Forum 2015 for her contribution to the field of sustainability in the United Arab Emirates. “From that moment, I knew I had to keep working for a more sustainable future,” she shares.

Three years later, she joined the Dubai Future Foundation as Associate Project Manager. Here she worked with several teams on a wide range of projects, including the Museum of the Future. Maitha’s role at the museum spans a wide range of responsibilities, including recruiting and managing participating international and local designers. “I led the design process for the museum’s second floor lounge by curating its narrative. Additionally, I lead the team responsible for providing content around the exhibits and overseeing the process of translating content from English to the Arabic of display cases and publications associated with the museum,” she notes. In addition, in her mandate is to lead the design of staff uniforms, which have been designed by Emirati and local fashion designers. also worked as part of the site supervision team, overseeing the layout of museum exhibits.

Sustainability is central to the museum’s design – rightly so, as the building is a bastion of futuristic city models. “It’s the first museum of its kind in the Middle East and is aiming to achieve LEED Platinum status,” shares Maitha. The low-carbon civic building achieves sustainability through several innovations, including its parametric design, passive solar architecture, and low-energy and water-consumption engineering solutions. It also provides energy and water harvesting strategies, using sustainable building materials.

“Even the green mound on which the superstructure rests uses native plant species that are resistant to heat and drought,” she explains. “It is also equipped with a smart irrigation system to minimize water consumption, as it uses weather data from humidity sensors to reduce over-irrigation. Any water overflow is collected and recycled back into the irrigation reservoirs to ensure there is no wasted runoff water. I am very proud to be part of such a flagship project in the field of sustainable buildings.

The heritage of the United Arab Emirates is felt in the 14,000 meters of Arabic calligraphy that adorns the museum’s stainless steel facade, with words from a poem by His Highness Sheikh Mohammed bin Rashid Al Maktoum, Vice President and First minister of the United Arab Emirates and ruler of Dubai, which were designed by the coveted Emirati artist Mattar bin Lahej. “The future belongs to those who can imagine it, design it and execute it…The future does not wait…The future can be designed and built today,” reads in part .

“The most striking element is the Arabic calligraphy which elegantly envelops the building. In keeping with the museum’s sustainability agenda and innovative design, the cursive writing also serves as windows illuminating the interior and illuminating the building with 14 kilometers of LED lighting at night,” says Maitha. “Together, the steel structure and Arabic poetry form an incredibly striking and inspiring facade.”

The Museum of the Future has become a global test bed for emerging technologies. “Indirectly, it delivers a message to the world that Dubai is a hub for collaboration and offers an ecosystem of support for innovators and start-ups in fourth industrial revolution technologies. Dubai’s culture of innovation, flexible and supportive regulatory frameworks and favorable business climate make the city a hotspot for the development of emerging technologies,” said Maitha.

The museum offers a blend of the rich traditions and futuristic spirit of the United Arab Emirates through its distinct creative language. “The calligraphy that adorns the facade defends the Arabic language and therefore our rich culture. At its core, it is an embodiment of the UAE’s outward-looking stance and Dubai’s position as a hub for global collaboration,” says Maitha. “The United Arab Emirates has a tradition of welcoming the world and Dubai is one of the most multicultural urban cities. In the same way, the museum brought together the best designers, architects and innovators in the world to not only construct the building, but also to help build a better future for humanity.

An intriguing new world awaits visitors to the museum when it opens – its launch date has yet to be announced.

I can confirm that customers would never have experienced anything like this before. The museum of the future will include futuristic concepts and solutions, which can be used to help humanity meet some of its greatest challenges.

– Maitha Al Mazroei, Associate Project Manager at the Museum of the Future

“I can confirm that clients would never have experienced anything like this before,” Maitha reveals. “The Museum of the Future will include futuristic concepts and solutions, which can be used to help humanity meet some of its greatest challenges.”

Visitors can expect an immersive experience that will transport them through time and space. “We have partnered with world-renowned companies to create complex environments that will allow customers to detach from their current reality. All the partners have come together under the same banner to collaborate intimately and harmoniously in order to ensure a coherent and holistic journey. Visitors will leave with a new sense of optimism and inspiration to organize the kind of future they want to live in,” says Maitha.

As the UAE celebrates its 50th National Day this year, it has continued to strengthen its position in the futuristic realm. “The country has made tremendous progress in a short time. We have become a space nation and a world leader in logistics, leveraging fourth industrial revolution technologies to create some of the most efficient, sustainable and robust supply chains,” Maitha notes, adding that the country has also contributed significantly on the global agritech agenda. and plays a leading role in the development of green energy and clean urban mobility.

“Over the next 50 years, the UAE will continue on its trajectory. As part of its vision, the country will pursue more ambitious feats around science and technology. We can expect achievements in space exploration, urban planning and, above all, sustainability,” Maitha anticipates.

As Sheikh Mohammed said on the facade of the Museum of the Future, “We may not live for hundreds of years, but the products of our creativity can leave a legacy long after we are gone.”