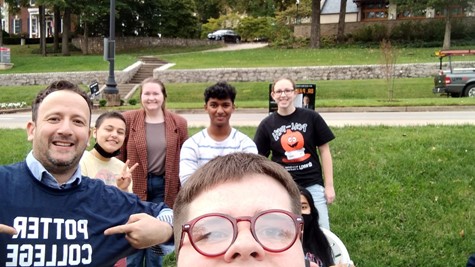 Linguistic and cultural learning at the PCAL Fall Festival

Professors and students from Potter College of Arts and Letters gathered on Tuesday 19, 2021 at the Kentucky Museum to commemorate the start of the fall season and celebrate a core WKU tradition: the PCAL fall festival. The students experienced the usual – music, popcorn, festivities, cool weather – but they also had the opportunity to participate in modern language and culture activities through the Department of Modern Languages and its various programs.

Students approaching the modern languages â€‹â€‹table were greeted by modern languages â€‹â€‹teachers from WKU such as Lhousseine Guerwane from the Arabic program and students such as Kerby Gilstrap, an Arabic major who is currently finishing her final year and leading of the WKU. Qatar Debate Team. The WKU QatarDebate team debates topics such as politics, education and the environment every year entirely in Arabic and will be present this semester at the Debating Championship in Chicago.

Students also had the opportunity to discover and try on henna designs (an important cultural product of weddings and celebrations in the Arab world) and have their names transcribed into Arabic. Many students also tried on traditional Middle Eastern clothing and really experienced a piece of the international world.

The students left the event with international knowledge, as if they had taken a trip around the world, and the Modern Languages â€‹â€‹Department at WKU continues to strive to be a

leader in language and cultural learning opportunities on the Hill. Interested in pursuing a language study program? Approach [email protected] for more information on the languages â€‹â€‹and programs available.