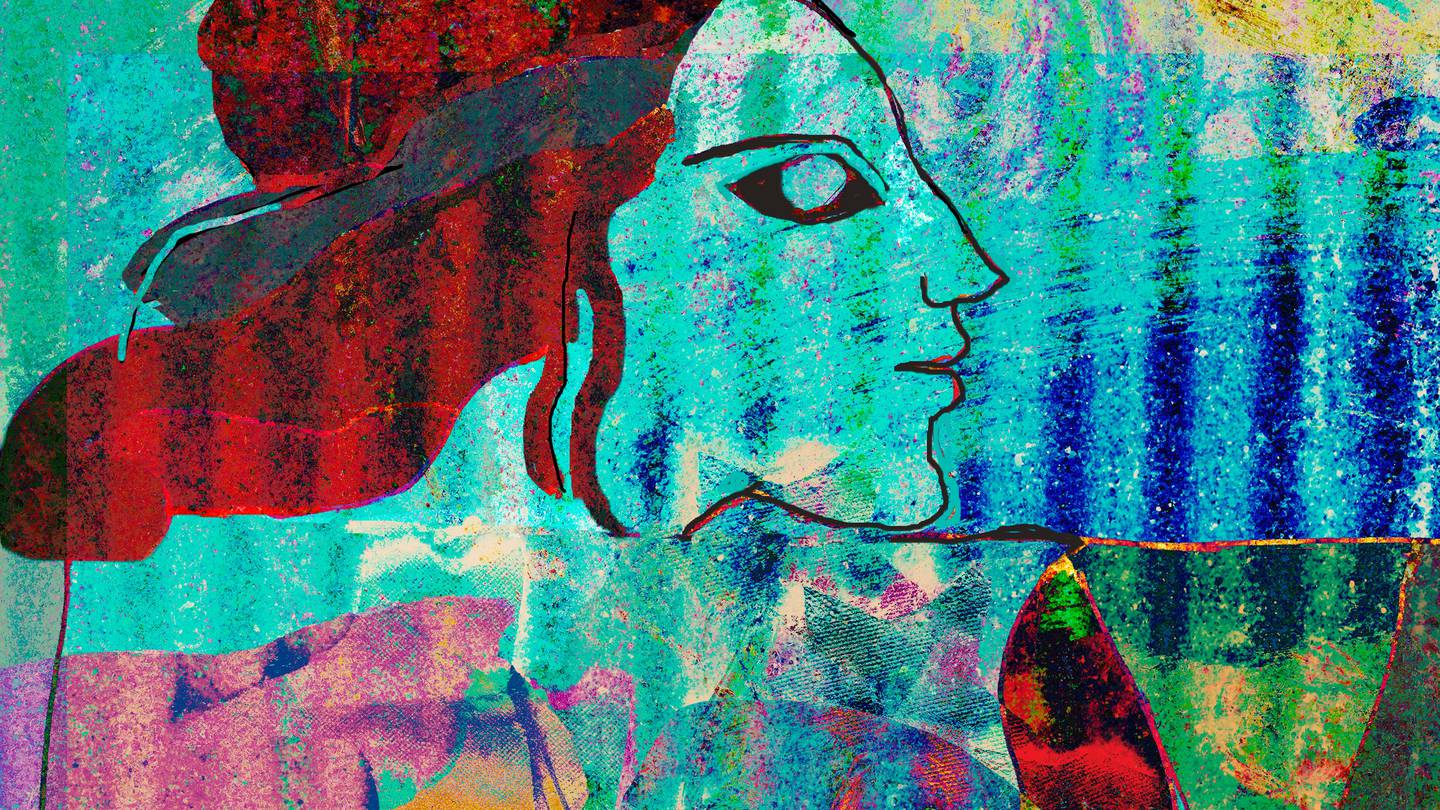 “What is your place – your Makancurator Venetia Porter asked the artists at the latest exhibition 21.39, the annual initiative of the Saudi Art Council. “Can you take me there?”

Porter’s show, Amakin, opened in March in Jeddah. It has now traveled for the first time in the programme’s history, launched on Thursday at the King Abdulaziz Center for World Culture – Ithra, the Saudi Aramco-funded arts center in the Eastern Province.

Porter’s question has resulted in an intimate, personal and cross-generational exhibition, as visions of home – a changing home, a home you can’t return to, a home destroyed by climate change – emerge among the works by 28 artists.

“It was the era of endless Zoom conversations,” she recalled of her preparations for the exhibit, saying her original plan was to organize a group excursion through Saudi Arabia. The Covid-19 pandemic gave her video meetings instead, and an extra year to organize it, which she used to seek out young artists or lesser-known parts of historical practices, showing them to alongside established Saudi and international names.

The places emerge through stories, many works evoking recalled or imaginary stories, or personal and family memories. In A Lovely Couple, Emy Kat captures Al Balad in Jeddah without a single image of latticework or carved woodwork. Instead, he exhibits close-ups of the brilliant cerulean blue found in the Old City, in a choppy, intermittent grid — a throwback, he says, to the days when he wandered Al Balad as a child and got lost in his maze. The memory of his childhood rubs shoulders with the portraits of the grandchildren who accompanied him when he went to take photos of a residence in 2012, visiting France.

Placed next to it is a wall made of crumbling coral material from Al Balad, by Asma Bahmim, into which she has embedded folded pieces of paper representing her wishes, with snippets of their hoped-for outcomes barely visible.

Bashaer Hawsawi shows textile murals in Cleaning (2019), for which she places the bristles of a red plastic broom on African fabrics in clean, checkered patterns. The materials here tell the story of Hawsawi’s family: some of his family members were mutawifun, who look after pilgrims to Mecca, and who came from Nigeria generations ago.

One of the highlights of the exhibition is the video Yallah, Yallah Beenah! (2022) by Mohammed Hammad, a surreal vision of coming of age, with talking feet and laser-eyed witches. This note of surrealism and visual spectacle resonates in several works by young creators in the exhibition, coexisting with Porter’s predilection for artists’ books and works on paper.

Sometimes the passage from the spectacle to the intimacy of the artist’s book is brutal, but it is interesting to observe how the young cohort of creators seeks both the scale and the intimate reflection usually associated with drawing or sketchbooks. Obadah Aljefri, for example, has created a giant lavender Moleskine notebook, adorned with kitsch and fantastical designs that he describes as a collaboration between himself in the present and the child he was. The end of the show is Sara Abdu’s sublime presentation of infinity now15 hanging rolls of paper in which she attempted to write a straight line in henna ink – a piercing act that attempted to situate her “place” as out of body, out of mind.

Porter is the long-time Curator of Islamic and Contemporary Middle Eastern Art at the British Museum, where she has built up a significant collection of works on paper for the museum. Its specialty in this field also bases the 21.39 exhibition on a classicism, drawing and calligraphy know-how, in decline in contemporary art. In some cases, this means showing the work of artists still from classical training, such as Pakistani designers Imran Qureshi or Aisha Khalid, both in Lahore. Khalid’s intricately drawn green-textured designs are overlaid with gold leaf shapes in an evocation of the Kaaba.

Porter also goes back in time to show substantial presentations of important names, such as Dia al-Azzawi, Safeya Binzagr and Abdulhalim Radwi, where the emphasis on works on paper gives insight into the artists hand, something that the formality of large creations usually obscures.

“I’m interested in artists who use paper. In other words, I am interested in the process. In the drawings you can feel the artist’s hand, see his thought process,” Porter said. The National.

For Binzagr, for example, instead of his oil paintings, Porter chose his watercolours, sketches and etchings — by far his most interesting work — in which Binzagr documents traditional rites, activities, children’s games and the clothing of the different tribes of the kingdom. The juxtapositions of preparatory sketches and their result in etchings and prints demonstrate the process Binzagr followed for his final product.

Likewise, Porter shows not only Radwi’s well-known Symbolist paintings, but also the treasure trove of sketches he kept in his studio.

“For Radwi too, most people know him for his oil paintings,” she says. “At one point I asked, what else does he have in his estate? And his son pulled out a huge portfolio with these drawings, totally unknown, unpublished. They are undated, so these are obviously pieces that he did not expect to exhibit.

“You see in these drawings an informality that you lose in oil paintings. And at some point he clearly decided that he wanted to experiment with printed gouaches. So it was an opportunity to find, even by established artists, work that people don’t normally associate with them.

Porter has also researched the artists of the Department of Cultural and Artistic Society of the Eastern Province (the Jame’a Al Thagafah wa Alfunoon), which emerged in the 1990s and is less well known than others. modernist art societies in the kingdom. Some exquisite works by Abdulrahman AlSoliman, new for the Ithra exhibition, show the painter’s responses from Al Sharqiya to the damage to the coast during the first Gulf War, when oil spills came from Kuwait and decimated life birds and plants.

The historical additions help distance the exhibit from the same roster of artists that the Saudi scene sometimes browses. Indeed, it is the first entirely public 21.39 since the Covid-19 interruption (art historian Fabien Danesi organized an exhibition last year which was unable to open), and it is emerging in a new context in the kingdom’s contemporary art landscape.

Once alone in its aims, it now sits between the Diriyah Biennale, Desert X AlUla, the myriad projects of the Ministry of Culture and those of Jeddah’s new arts complex Hayy Jameel, located not far from the traditional excavations of the Gold Moor shopping center in 21.39.

Having 21.39 in Ithra underscores the fact that it all exists in a spirit of collaboration rather than competition, says Farah Abushullaih, Ithra Museums Manager.

“The Saudi Art Council is one of the most established entities in the kingdom,” she says. “They are among the influential players in the industry. We share a similar vision and mission when it comes to wanting to support and grow the local ecosystem here in the kingdom, but also making sure we show international voices as well.

Future 21.39 exhibits may once again travel to Ithra, says Abushullaih. In Ithra, the museum is reviewing its programming after two years of extreme upheaval, as everywhere else in the world. A more local focus is likely to take hold, perhaps because the enforced locality of the lockdown has made artists and curators realize, as Porter did for Amakin, how much research remains to be done on communities in which we already live.

amakin is at the King Abdulaziz Center for World Culture – Ithra in Dhahran until September 30; www.ithra.com

“Geography of Hope” by Abdullah AlOthman refers to theories of refraction of light that date back to the earliest days of desert civilization. All photos: Desert X AlUla / Lance Gerber