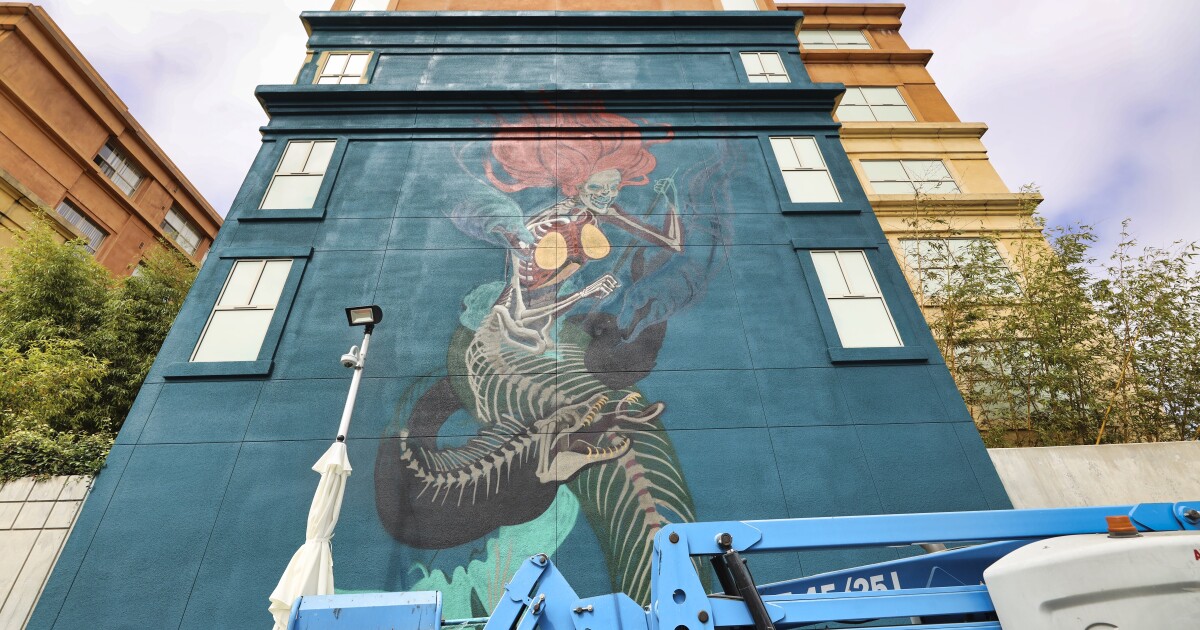 How the ‘Made Fresh Crew’ are leaving their artistic mark, refreshing the visual landscape of Santa Cruz

On a wall overlooking a once boring downtown Santa Cruz parking lot reserved for subway buses, a giant mermaid stands, perhaps 30 feet tall. But this isn’t some sweetly benign children’s book siren. She winces, like a warrior charging into battle. Her skin is translucent – ​​you can see her bones and internal organs – and she is fighting for her life against demented eel-like creatures that glow with radioactive wickedness. Imagine Disney’s Ariel newly freed from decades of Chernobyl captivity and transformed into Medusa.

It’s not exactly the kind of imagery you’d expect in a public place, but Santa Cruz has dozens of eye-catching stark murals these days. In fact, the nightmarish mermaid shares her wall with another enormous mural, this one of a shark swimming through giant California poppies.

Each mural is marked with the stamp that is becoming increasingly common in the city: “Made Fresh Crew”. Yes, it does look a bit like one of those home meal kits that were all the rage a few years ago. But Made Fresh Crew reflects a new big moment in the Santa Cruz art scene, with a focus on “Fresh.”

MFC is a brand, it’s a movement, it’s a collective of Santa Cruz artists ready to announce their presence. It’s also the subject of an invigorating new art exhibit at Curated By the Sea on Front Street, next to the Museum of Art and History, whose outer wall is the latest site for an MFC mural. .

The mermaid mural and more than a dozen others, equally striking in their eye-catching power, are the results of the ambitious “Sea Walls” project which, in the fall of 2021, transformed Santa Cruz into a city of murals overnight – technically, about a week’s worth of overnight stays.

“Sea Walls” wasn’t strictly a local endeavor – the artist behind the translucent mermaid is renowned Austrian muralist Nychose – but it did happen under the organization and direction of Made Fresh Crew. “Sea Walls” can be understood as a kind of partnership between local and outside artists to depict the danger facing the global ocean through vivid and unforgettable artistic images. (Here is a map of the 19 “Sea Walls” murals, most of which are within the Santa Cruz city limits.)

Curated By the Sea’s “Street Smarts” show is more about the individual artists behind Made Fresh Crew. This is an opportunity to see the other approaches and artistic interests of the artists who worked together on the mural project.

First among his peers in the group is muralist Taylor Reinhold, aka “Tay Lion.” Reinhold describes Made Fresh Crew as a network. “There’s a core group of us who have been together for a long time,” he said. “And then there are other artists who are inspired by it and want to work with us, and there are resident artists that we call on when we need help. It’s really like a big family of artists.

Curated’s new show focuses on 10 of MFC’s affiliate artists. It is not quite fair to qualify the Crew as “young” artists. Some are under 30, but others are not. But they represent relatively new names in the Santa Cruz visual arts scene, often with artistic orientations stemming from graffiti, street art, industrial art, and skate/surf culture.

Besides Reinhold, “Street Smarts” features the work of artists Abi Mustapha, Alex Wong, Caia Koopman, Elijah Pfotenhauer, Erika Rosendale, Jasper Marino, Kurt Smiley, Scotty Greathouse and Tom Watson. The show emphasizes that Made Fresh Crew is more of an affiliation than a specific aesthetic. These are 10 individual artists as different from each other as they are similar.

Reinhold’s own paintings have a sort of “Blade Runner” mystique to them. These are stunning evocations of hallucinatory imagery, striking themes of Asian calligraphy and wild creatures. One piece is a swirl of intricate line art – chimpanzee faces crashing into street graffiti colliding with exotic ocean fish – all presented inside the mouth of a giant shark in stainless steel.

The shark features prominently in the art of Kurt Smiley, who is depicted here as a scrap hammerhead shark made from a helicopter rotor (its teeth are sharp screws). Smiley also exhibits a few tables and chairs made from pliers, ratchets, screwdrivers and other garage tools. Alex Wong’s beautifully crafted woodwork, with layers of colored wood in various fascinating patterns, is all the more impressive when you learn that it’s made mostly from recycled skateboards. There are even collaborative pieces between artists.

Reinhold said there was no formal membership in the collective, it was mostly artists from Santa Cruz, but there were artists from around the world who were honorary members. He said there is a “core” group of around 30 artists, with around 100 more in the outer circles of the loose association of artists.

He said there is no overriding aesthetic with Made Fresh Crew, but there may be a common ground. “We were mostly raised on skateboarding and inspired by graffiti art and the Phillips family,” he said, referring to Santa Cruz father and son graphic designers Jim and Jimbo Phillips, who both have had a huge success in the art of skateboarding.

“We all grew up on the streets, whether it was in broken homes or if we had skateboards in our hands, and we just lived on the streets and were inspired by abandoned buildings, drainage ditches and those urban places that we would have to find to be able to skateboard or be able to paint.

Reinhold, 34, had already created great public art in Santa Cruz before the “Sea Walls” project, including the large ocean conservation mural at Mission and Bay on the Westside and the bold blue Annieglass building in Watsonville (Reinhold is the son of founder Annieglass and Santa Cruz Artist of the year Anne Morhauser). He has also created murals at sites around the world.

The “Sea Walls” project quickly expanded public art in Santa Cruz and changed the look of the city. Many artists associated with the show “Street Smarts” and others in Made Fresh Crew have contributed to this new look, which draws inspiration from street art forms that aren’t always popular. Some of the “Sea Walls” murals, like the translucent mermaid, are provocative and challenge the idea of ​​safe, pleasant, or “beautiful” art. It’s edgy and rambunctious the same way outlaw art forms, like graffiti, are edgy and rambunctious.

“Some people love it and some people hate it,” Reinhold said of the general reaction to the “Sea Walls” murals. “Most people like it, but when you see letters without lines, fades, colors and gradients, people start saying they don’t understand. There is no education on what graffiti art is. And graffiti is associated with vandalism and vandalism is bad. Therefore, many people do not want to see this kind of art.

As for Made Fresh Crew, it is more of a movement that anyone can join, rather than a club reserved for those who meet certain criteria.

“There’s a ton of different approaches and styles that people have taken,” Reinhold said. “I think the majority of people who recognize us are the street art and graffiti inspired themes and the murals we do, but there are so many artists who also do other work that isn’t really as a lot of recognition because they’re not in the public eye as much as they are in their studios.

“And the things we do are pretty, you know, it’s big and powerful and a lot of energy. But I think the overriding theme is just creativity, it’s like you’re pushing and promoting your art under n any form, so we want to support that and help out as much as we can.

“Street Smarts”, the art of Made Fresh Crew, is showing now at Curated By the Sea, 703 Front St., Santa Cruz, through June 11.