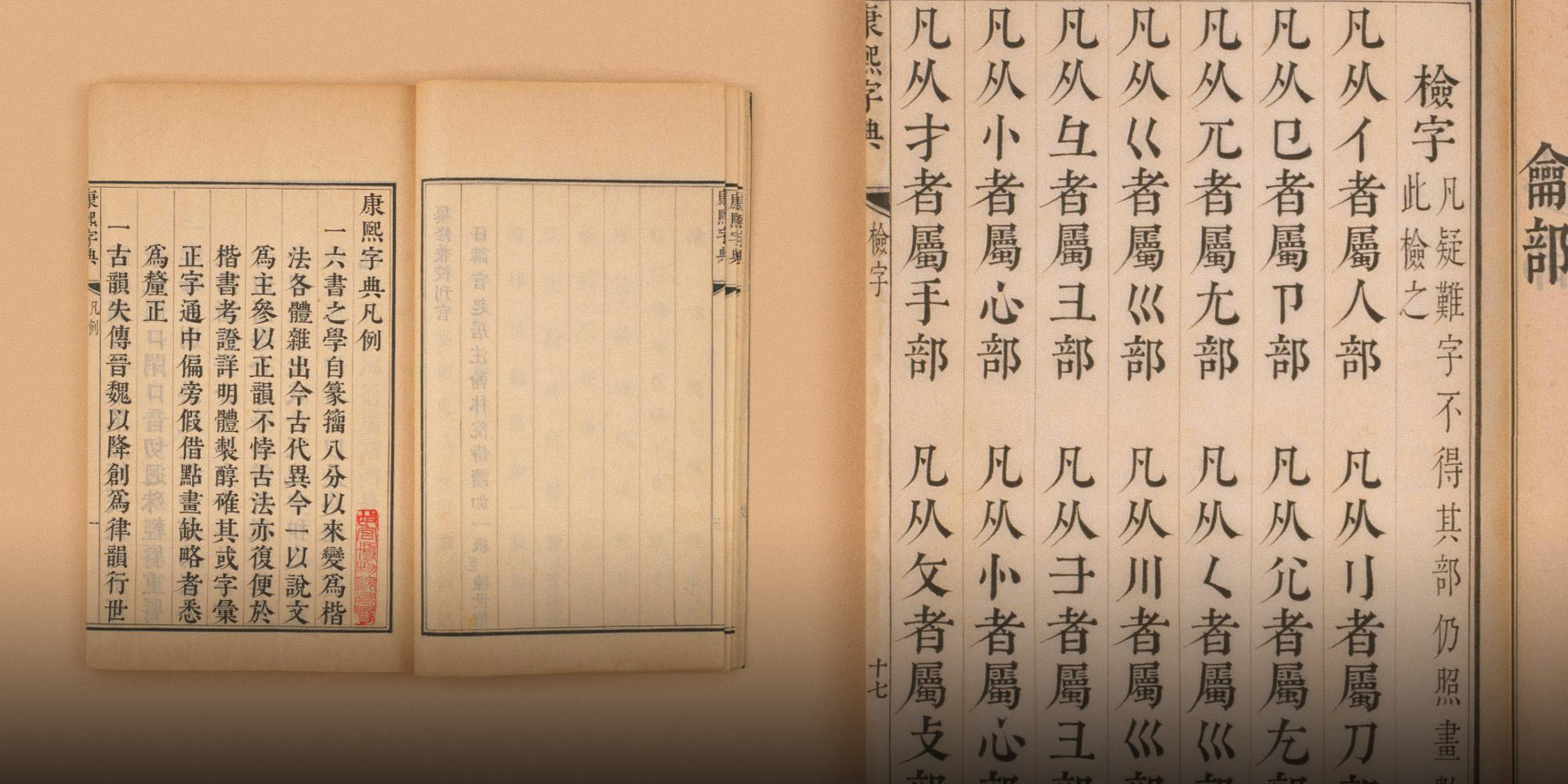 In 2010, a young type designer named Li Xiangchen extracted over 47,000 Chinese characters from a photocopy of the 300-year-old Kangxi dictionary and used them to create a rudimentary digital font. Although Li’s initial motivation was more academic than commercial, his font based on the Kangxi dictionary made an immediate impression. Within a few years, it was seemingly everywhere, from milk tea shops to posters detailing China’s “core socialist values”.

The compilers of the Kangxi dictionary would likely have been intrigued by the typeface’s popularity, if not its commercial utility. The typeface belongs to a category known in Chinese typography as “woodblock printing typefaces”, which, as the name suggests, were primarily used in books produced via woodblock printing.

Regardless of their current appeal, these characters had little aesthetic value to the people who created them. Invented in the Tang Dynasty (618-907), woodblock printing was a laborious process. To create a single-page woodblock, scribes first wrote the characters on paper before transferring the text upside down to a woodblock, which the engravers then chiseled to produce raised characters. suitable for printing.

Woodblock printing became the default for “mass” literature and classic works of philosophy in medieval and early modern China. Even after the advent of movable-type printing in the Northern Song dynasty (960-1127), printers continued to use woodblock presses for key titles like the Confucian Four Books and Five Classics.

That’s not to say that character styles have remained static. In the beginning, engravers sought to faithfully reproduce the form of handwritten characters, generally the standard then Kaishu script. The result was nearly indistinguishable from brush-written characters.

Of course, if you’ve ever carved wood, you know that it’s much easier to carve straight lines than the curves of handwritten Chinese characters. So, in the face of growing demand and the search for efficiency, engravers began to take shortcuts; in doing so, they reshaped China’s relationship with the written word.

The form of type in printed works began to deviate significantly from that of brush type during the Southern Song dynasty (1127-1279). Although they retained a handwritten feel, their outlines stiffened into a style we now know as the Song style font, or Songti. In the Ming dynasty (1368-1644), engravers went even further, straightening all horizontal and vertical strokes to create what is known today as the Ming style typeface, also known as Minti.

How print fonts have changed over time. Ding Yining/Sixth Tone

For Chinese scholars, these printed scripts were lifeless, uninspired, and bland, at least compared to handwritten calligraphy. What then explains the current popularity of the Kangxi dictionary typeface?

One key lies in its production method. Beginning as an academic project, Li Xiangchen’s Kangxi Dictionary font retained the original shape of the characters, not as they were originally carved, but as they appeared in his photocopied Kangxi Dictionary. This included the uncertainty of the knife work, the natural wear and tear of the woodblock, the unevenness of the ink printed on the paper, and the fraying of the book over time. These factors were more or less baked into its typeface, giving it a nostalgic charm that resonated with a mass audience.

The font also benefited from factors beyond Li’s control. Just two years before Li created his Kangxi Dictionary font, Zhang Yimou staged his spectacular opening ceremony for the Beijing Olympics. The event was essentially a hymn to Chinese history and culture – including a huge segment comprising 897 movable-type printing blocks, each operated by an artist, rising from the ground of the Bird’s Nest stadium. Linking the country’s rise to its historical and cultural achievements, the show highlighted growing cultural confidence and a thirst for tradition among Chinese audiences.

A sample of Li Xiangchen’s Kangxi Dictionary font. The paper

But the popularity of Kangxi Dictionary-style fonts was not limited to the Chinese mainland. The hacked font files quickly spread to Taiwan, which never adopted Simplified Chinese, and where the font was adopted in some corners as an even more “true” form of traditional characters. Soon the typeface was everywhere on the island, from traditional food stalls to cafes, historical book covers, pet photo albums, real estate ads, music albums and even campaign advertisements. .

Unsurprisingly, the police’s massive popularity has generated a backlash. Typophiles began to avoid it; we even started a Blog called “No More Kangxi Dictionary Font” which collected examples of misuse of the font.

Some of Li’s police concerns were correct. On the one hand, it was mechanically converted from images to outlines without corrections, adjustments, optimization or other retouching, which makes its size and line placements inconsistent and uneven.

It ended up occupying a status similar to that of Comic Sans in the English-speaking world, and young designers often find it hard to imagine how ubiquitous it was.
– Liu Yuli, typographer

In retrospect, between its shortcomings and its overuse, the decline of the Kangxi dictionary typeface was probably inevitable. It ended up occupying a status similar to that of Comic Sans in the English-speaking world, and young designers often find it hard to imagine how ubiquitous it was.

Nevertheless, it is a kind of time capsule: a window into the beginnings of the craze for traditional Chinese culture. Prior to 2010, the default method of expressing “traditional Chinese culture” via typeface was to use calligraphic-style writing. The Kangxi Dictionary typeface broadened the mindset of designers, who began to look for inspiration in Chinese characters from different eras and media. While these newly developed digital woodblock print characters take heavy inspiration from their vintage counterparts, their designers have taken a much more professional approach: eliminating the worn look and other unintended side effects of vintage printing while remaining faithful to the original. form of characters.

Ultimately, the current popularity of woodblock type is less about their intrinsic aesthetic beauty than about their relationship to Chinese tradition. Blocky Song and Ming typefaces may not have the elegance of calligraphy, but they testify to the massive expansion of literary culture enabled by the development of printing technology. Likewise, typefaces based on Republican-era Chinese prints are immediately reminiscent of that time of drastic cultural change.

Designers are constantly borrowing and reinterpreting history. Just as designers today use old prints and newer designs to pay homage to China’s past, modern digital fonts, memes, and video effects will one day form the basis of retro or historical fonts. And who knows, given enough time and distance, maybe even the Kangxi dictionary font will get a second chance to make a first impression.