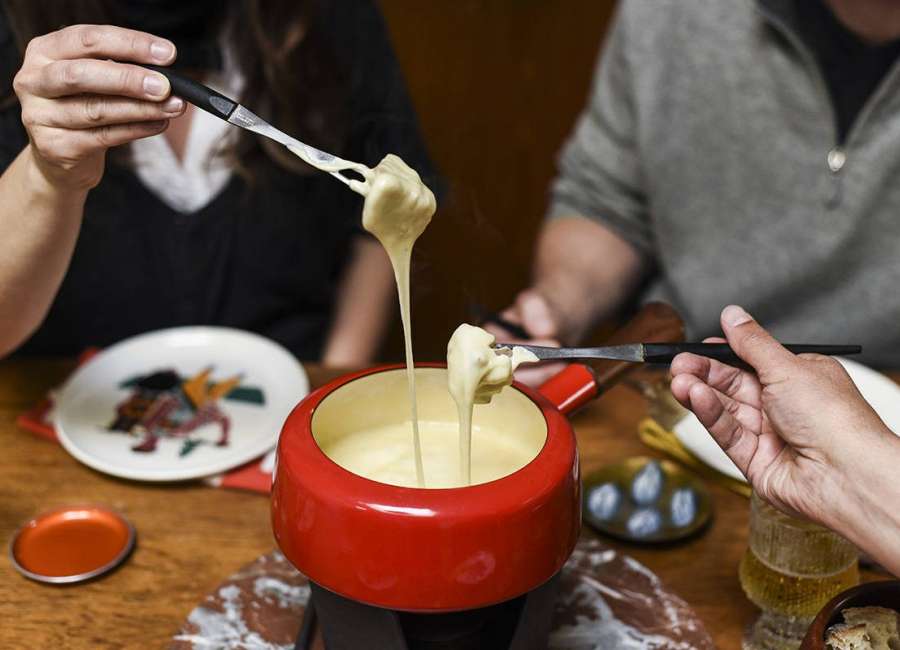 Fondue and culinary memories with the family

A few years ago, I was leafing through an old family cookbook filled with notes, writings and newspaper clippings. When mom’s fondue recipe card fell on my kitchen floor, I was elated.

The 3×5 card bordered in blue had its cursive writing in ink, clear and strong. Not the loose scribbles she could only handle in her later years.

That, alone, put his cheese fondue recipe squarely in time and in my memory, during his active, middle-aged years. It will be a long time before she gives up cooking altogether, when she moves into her well-appointed retirement home. I’ll never forget what she told me a week after moving in.

“I don’t like this place,” she whispered, leaning over me, resting her arms on her walker. “Too many old people! And the food is terrible! ”

She was then 82 years old, her mind still too sharp and her body too weak and weaker every day. She had not yet met her intellectual or culinary partner there, and she felt lonely to feed herself.

His recipe card could just as easily have been a Proustian cookie. It vividly reminded me of her fabulous fondue – the creamy, rich and biting flavor of dry Emmental and Sauterne, the instant taste on my tongue and the strong smell of cheese present as I inhaled the memory.

I saw our family in our kitchen on a Saturday night. Dark haired mom and dad, my brother and I as young teens – him with a flat top and buttons, me with a ponytail and young skin, we all gathered around our wrought iron kitchen table. and glass.

I felt the weight of the heavy metal chairs that didn’t slide on the kitchen mat, requiring a jump forward while sitting, both hands gripping the sides to slide our legs into place under the table. I could touch the woven blue and beige striped placemats ubiquitous on the glass. I saw the sparkling copper pot set on a metal base above a flaming sterno box in the center of the table.

I heard our voices in the conversation. Nothing specific, just a slight general hum. We always talked during family meals, as we sat together every evening at 6.30 p.m., without being distracted. There was a rhythm to our routine and to our speech.

I also have a vivid memory of a miserable quarrel over dinner time with the family. It was because one of us kids forgot to tell mom ahead of time that we would be late for a school function, which meant not showing up for dinner. This sin of omission was the ultimate disrespect for my mother. She was furious, swearing, “I NEVER COOK ANOTHER $ & @ #% * MEAL IN THIS HOUSE!” She didn’t really mean it, but she sure wanted it. We were teenagers, still selfish enough not to understand why this should matter.

The happy memory of the family fondue, however, and the discovery of his recipe card prompted me to remake his cheese fondue, this time while my brother and his wife were visiting us two Christmases ago, before the pandemic. .

I prepared the fondue according to the directions on the menu, then turned off the heat and let it sit in the pot to “melt the flavors” while we went to get my brother and sister-in-law to the airport.

Once in our car, bags packed and seat belts fastened, my brother was almost childish on the way home when I told him what was in for dinner. The wait was palpable.

That’s why, when we finally sat down to dinner, what happened next was so… impactful.

Everyone was sitting at the table, staring wide like children at a birthday party, waiting for the lit cake to scroll. I walked over to the pot full of cheese on the islet and grabbed the handle of the whisk I had left in the pot. The whip was still. The cheese was cement. No amount of reheating worked. The cheese sauce had broken, hardened and was horribly, irreparably ruined.

Like the legendary sword in stone, the whip could not be removed. I lifted my pot of shame by the handle of the built-in whisk, and held them both up in the air, merged as one, to proclaim my place at the bottom of the fondue cooks ranks. We all screamed. I laughed so hard I thought I might get my pants wet.

“Where did I go so wrong ?!” I yelled, gasping for breath between bursts of laughter. I couldn’t explain it. None of us could either.

Times like these make you want to call your mom and ask her this question, even though you know you can’t do it anymore.

All I could do was try again, and not when it was important.

And that’s what I did. Believe me, even if it’s not my mother’s recipe, this one will do just fine and it’s a guaranteed good memory.

• Small new potatoes boiled in their skins. Cut in half or in quarters if big.

• Cubed breads: French, sourdough, pumpernickel, (or Italian bread from the Publix bakery!) Barely on toast for a bit of crunch.

• Grate all the cheeses in a bowl. Add the cornstarch and mix well to coat all the pieces.

• In a saucepan, bring the wine, garlic and lemon juice to a boil. Gradually add the cheeses for a smooth fondue, stirring all the time. Once smooth, add the cognac and mustard.

• Arrange the tray with all the dipping elements.

• Pour the fondue into a fondue pot and serve with fondue forks or wooden skewers.

Susie Berta has many creative pursuits including music, art, writing, cooking, gardening, entertainment, and decorating. She has lived in Newnan with her husband, Rick, since 1977. They have raised two boys and have two grandchildren. She is retired from a long career as a singer / performer, having performed for many years in the Atlanta Symphony Orchestra Choir and Chamber Choir, as a vocalist at St. Mark UMC in Atlanta, and in many other places besides her. one-woman show, “All Grown Up,” at the Rialto Theater in Atlanta. As an empty breeder, she returned to school in 2003 and earned a BFA in Art from the Atlanta College of Art and SCAD Atlanta. She now pursues her passion for writing and is currently working on her memoir, The Veterinarian’s Wife.