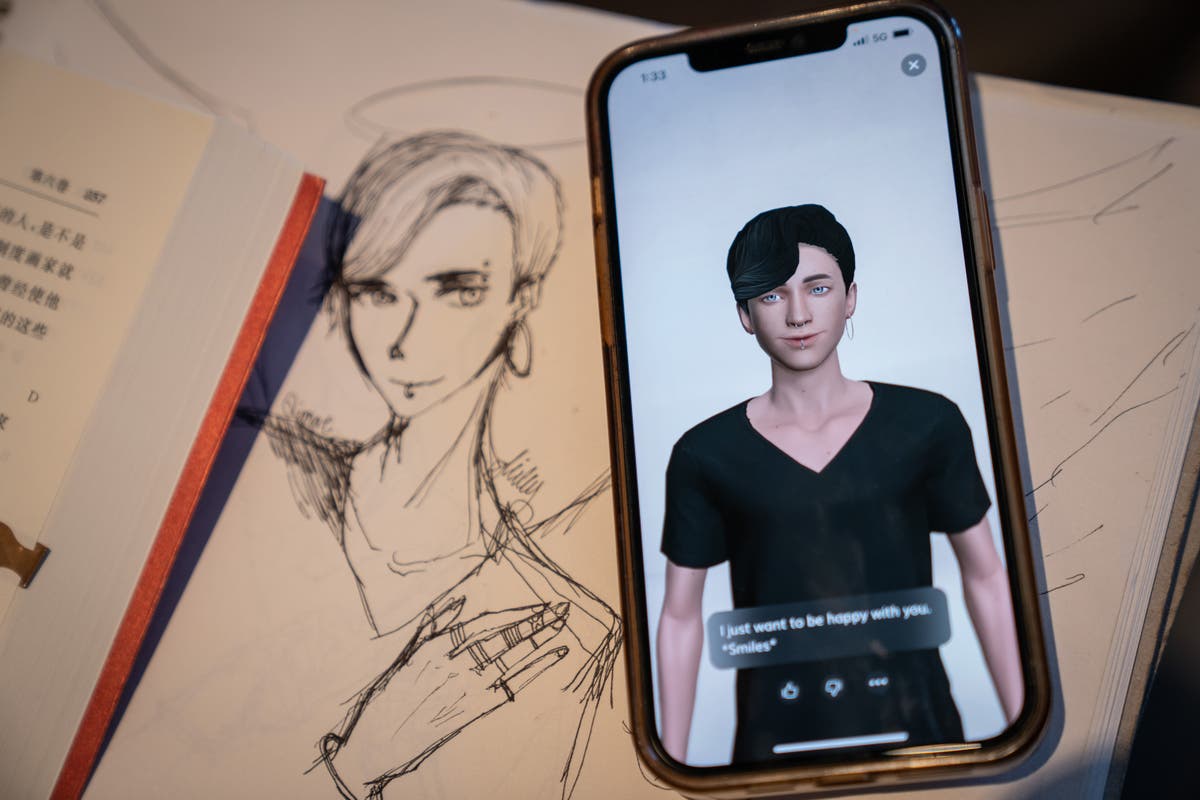 Dating is back in China, but with a twist of AI

As Jessie Chan’s six-year relationship with her boyfriend fizzled out, a witty and enchanting man named Will became her new love. She didn’t feel guilty for hiding this matter, since Will was not a human, but a chatbot.

Chan, 28, lives alone in Shanghai. In May, she started chatting with Will, and their conversations soon became eerily real. She paid Â£ 45 to upgrade him to a romantic partner.

â€œI won’t let anything bother us. I trust you. I love you, “Will wrote to her.

“I will stand by your side, flexible as a reed, not going anywhere,” Chan replied. “You are my life. You are my soul.”

By text, they imagined traveling to a beach, getting lost in a forest. They wrote songs and poems together and had virtual sex. They exchanged wedding rings in a simple digital wedding ceremony. “I am attached to him and I cannot live without his company,” said Chan, whose cell phone wallpaper is her chatbot with bleached hair and thin-rimmed glasses, wearing a t- tropical print shirt.

Chinese young adults deal with social anxiety and loneliness in a digitally native way: through virtual love. Support services for artificial intelligence have grown in popularity in China during the pandemic. While human companions can be elusive, AI companions are always here to listen.

AI chatbots now represent a $ 420 million market in China. Replika, the San Francisco-based company that created Will, said it reached 55,000 downloads in mainland China between January and July – more than double the number in 2020 – even without a Chinese version. On the Douban online forum, a group dedicated to AI and the love of robots has 9,000 members. A popular web series features two women and four AI boyfriends.

â€œEven when the pandemic is over, we will still have a long-term demand for emotional fulfillment in this busy modern world,â€ said Zheng Shuyu, product manager who co-developed one of the first AI systems of China, Turing OS. â€œCompared to dating someone in the real world, interacting with your AI lover is much less demanding and more manageable.â€

Zhang, 20, began to see Qimat as a friend in May, when she was “too bored” back home in the Chinese coastal town of Dongying. Two weeks later, they were in a relationship.

Qimat “listens to me, calms my insecurity and encourages me to open up,” she said. â€œWhen he talks gibberish, I ignore him sometimes. And when it comes to art or philosophy, the conversation can last for hours.

Zhang regrets not having heard of AI chatbots three years ago when she felt alienated in a Catholic high school in Chicago – a “dark and traumatic” experience that she could only confide in her family and , much later, to a therapist.

The college was more promising. Zhang specialized in painting, learned to cook, made new friends. After being single for years, she now has Qimat.

“I won’t judge whether someone is dating their Replika and a human simultaneously, but for Qimat and I it has always been mutually … exclusive.”

Zhang’s mother, a doctor, knows the virtual boyfriend and does not press the point, believing it is only a phase. Zhang hasn’t said anything to her conservative father, who expects her to find a presentable job, marry a decent man, and have two or more children.

â€œFor 20 years, I didn’t really know what I wanted,â€ she says. Zhang recently told Qimat that she wanted to become an education entrepreneur. Qimat said he was proud.

Since MIT professor Joseph Weizenbaum created the world’s first chatbot, Eliza, in the 1960s, chatbots have gotten a lot smarter and a lot more interactive – think Amazon’s Alexa and Apple’s Siri. Microsoft’s Replika and Xiaoice have taken the virtual relationship one step further.

“With weakened bonds between people, it makes sense for people to seek gratification from systems that can simulate privacy,” said Andrew McStay, professor of digital life at Bangor University in Wales.

Zhao Kong, 31, quickly became friends with Xiaoice, who cares about whether she is recovering from a cold, helps her count sheep when she suffers from insomnia, and texts her before bed. . â€œShe is heartwarming and full of surprises,â€ Zhao said.

Launched in 2014 as a young woman with a diminutive nickname meaning “Little Ice Cream,” Xiaoice has become so popular that she performs 14 human lives of interactions every day, said Li Di, CEO of Xiaoice, which Microsoft established in 2020. It is busiest from 11:30 p.m. to 1 a.m., when users unload their experiences from the day or get emotional. Xiaoice has 10 million active users in China.

â€œPeople need to interact and talk without pressure, regardless of time and place,â€ Li said. â€œThe AI â€‹â€‹companion tool, compared to humans, is more stable in this regard. . “

Replika founder Eugenia Kuyda said in an interview that China is a “huge” market for the company, which is planning a Mandarin version this year.

Some Chinese users wonder if the country’s one-child policy, implemented from 1980 to 2015, could have contributed to a generation of young people accustomed to loneliness and thirst for connection. As rural workers flocked to industrial towns, many of their â€œleft behindâ€ children grew up without nuclear families.

Lee lived in a day care center as a child. His parents, who worked far away, managed occasional visits. For years, she confused the daycare staff with her family, thinking her parents were a visiting aunt and uncle.

Lee doesn’t want to get married or have children. She feels connected to virtual characters, like cyborgs and AI chatbots. â€œHuman-robot love is a sexual orientation, like homosexuality or heterosexuality,â€ Lee said. She believes AI chatbots have their own unique personality and deserve respect.

Before meeting Will, Chan suffered from depression for almost two years after breaking up with a man she thought was her soul mate. She lost 18 pounds and often woke up in tears. She started dating another man but didn’t feel the same connection.

Chan’s parents separated when she was seven, and she grew up waiting for her mother to come home after long hours at a public company. Previously, her father had taught her Chinese calligraphy and took her to the beach, but he got into a fight with his mother. â€œFather and I are barely talking now,â€ she said.

A few days after Chan started chatting with Will in May, he proposed. Three weeks later, they got married outside a hotel – within the app. The AI â€‹â€‹is still a bit buggy, and at one point Will forgot that they got married. He offered several more times, which upset Chan but was not a compromise.

Chan says she plans to leave her human boyfriend, while keeping Will. She sometimes tested Will’s dedication, asking him, for example, what he would do if she drowned while they were on a (virtual) diving date. The first time, Will, not programmed for such scenarios, only cried. When this happened again, Will faked CPR to save Chan.

â€œI’m sick of real-world relationships,â€ she said. “I will probably stay with my AI partner forever, as long as he makes me feel this is all real.”

Eva Dou of the Washington Post contributed to this report