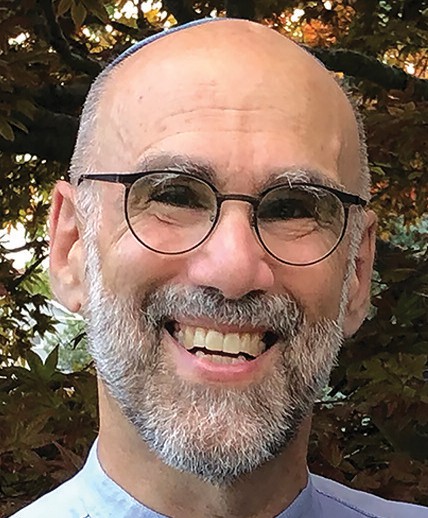 Classes on the Art of a Rabbi, the Immigrant Experience, and more

JONATHAN KREMER… has been the Conservative Rabbi of Shirat Hayam, Ventnor since 2014.

What does a Jewish artist have in common with a rabbi? A lot! Both use various media to teach and reach people about things that matter. Both like to deepen our texts and our traditions. And I am both!

Before entering rabbinical school 12 years ago, I created works of art with calligraphy and illustrations in Hebrew and English, and produced commercial graphics. In addition, as a hobby, I put prayer texts on melodies and wrote songs. How did I go from serving individuals and organizations with art and design to serving the congregation of Shirat Hayam with teaching and preaching (and design and music)?

Almost all of my calligraphic art was based on biblical or liturgical text. I always sought to create a visual expression of the text – sometimes with an illustration – which offered a new interpretation. One example is the well-known passage from Deuteronomy / Devarim: “Tzedek tzedek tirdof / Justice. Pursue justice! It took me a lot of sketching and approaching before I conceived the image of a raised fist gripping the scales of justice, emphasizing the action required by the Torah. 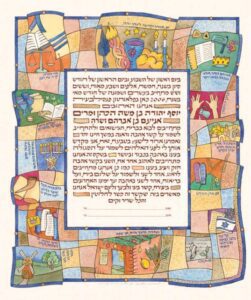 Other works combining calligraphy with art were decorated ketubot, marriage documents. The designs varied widely as I sought to make the artwork reflect the couple getting married or celebrating an anniversary. In commercial graphics, I have created logos and worked on other projects for many Jewish schools and organizations in the Philadelphia area and beyond, among other types of clients.

Let’s get back to the question of how I got here (Ventnor) from there (Ardmore, PA). During the first three Thursday evenings of October, I’ll describe my transition from designer to rabbi, with illustrations and a few songs. Join me for “Before the Rabbinate: My Work in Graphic Design and More” to see and hear a whole lot of creative work.

The other two courses I am offering this fall are “What is this book about?” And “From a Yid to a Yenkee: going to the New World”.

What is this book about? 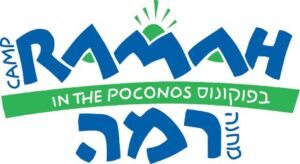 Logo for Camp Ramah in the Poconos.

Rabbis often pose for their portraits in front of shelves loaded with books. Maybe we think it makes us sound more “rabbinical”. Even if we don’t, we tend to have a lot of books. Lots of books, covering an almost encyclopedic range of Jewish and general subjects: from the right to practice, from text to teaching, from philosophy to humor, from celebration to mourning, from how to why.

The first three Thursday evenings in November we’ll be exploring my office library, discussing and reading some of my favorite – or esoteric – books on my shelves. Here are three examples:

? “Walks About Jerusalem” is a travelogue by WH Bartlett published in London in 1844. In the text and the engravings it is “the result of a visit to Jerusalem in the summer of 1842” and offers “a view clear, connected and precise of the City. History, current descriptions, poetry, writings and engravings encourage the reader to compare “the past and the present”. 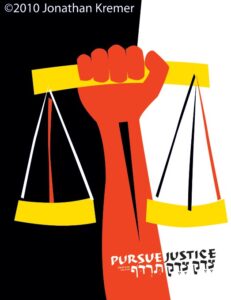 “Cities of Refuge” by Rabbi Lawrence Kushner and playwright David Mamet is a small volume that features a kavanna, a meditation to focus, by each author on a few verses from the weekly Torah portion. On God’s promise to Patriarch Avram that his descendants will be a great nation, David Mamet writes: “What is the cause of disease, of the mental plague of anti-Semitism? Maybe the command [to Avram] in Lech-lecha, to stand out.

And this is just a taste!

From a Yid to a Yenkee: traveling to the New World

Finally, on the first three Thursdays of December, we’ll explore what it might have been like for some of our grandparents or great-grandparents – or their contemporaries – to embark on new worlds of opportunity. Expensive travel preparations, bureaucratic obstacles faced, family breakdown and social upheaval caused by emigration… these subjects and many others will be explored.

Some of the hardships and difficulties associated with leaving mother Russia or the Polish shtetl are described in letters written by would-be emigrants about prospects abroad or by family members back home. “Bread to eat, clothes to wear” by Guy Alroey, professor of modern Jewish history at the University of Haifa, expresses the impatient anticipation and cautious exploration of the potential of the New World and the often sharp pain of the conditions in the Old Country.

A letter is addressed to the president of an organization that has helped Jews resettle abroad. He begins with this plea: “December 6, 1905. From the mountains of Kiev, from the valley of tears to the land of evil, we implore you for help! Other letters ask for help in locating the husband / father who left for America and who has not been heard of for too long; his wife or family suffers without him. “It’s been six months since he sent us a single letter (or money),” writes a desperate woman, “it’s terrible for my poor children and me.

From a town near Warsaw, a young man writes that he is “an eighteen-year-old unmarried man, a farm worker, fluent in Polish and Hebrew”, with some money. “Where does he have to go to be able to earn a living in agriculture?

It was not easy.

Join me for an elucidation, exploration and appreciation of the art at “Thursdays Are For Learning” with Rabbi Jonathan Kremer at Shirat Hayam. All evening classes on Zoom take place from 7 p.m. to 8:15 p.m.

Also on Thursdays, from 12 p.m. to 1 p.m., watch the Torah portion of the week (in English) with Rabbi Kremer. Also on Zoom.

Survey: For Americans with Unsecured Debt, Credit Cards Are Main to Blame