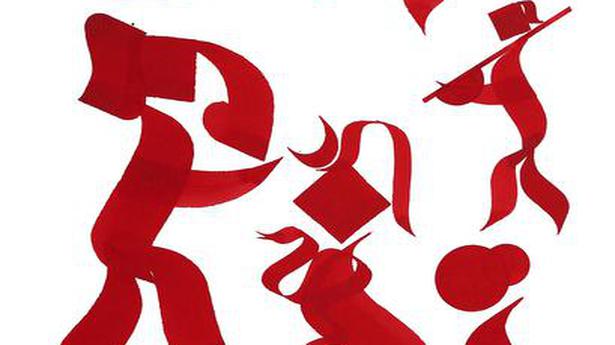 There is a lyrical rhythm with which Hyderabad-based artist Poosapati Parameshwar Raju uses pens and nibs of various sizes to draw alluring crimson red calligraphic shapes on paper. The artist is recognized for his minimalist accounts of stories from mythology. In Divine Rhythm, a new exhibition featuring 95 of his recent works, has opened online (
art.kunstmatrix.com/ ) as part of the Hyderabad Literary Festival 2022 and will be on view all this month.

The exhibition offers insight into a wide range of his work – stories from the Puranas, epics, Buddhism, Christianity and Aum illustrations, to name a few. The calligraphy featured in this exhibit will also be part of an upcoming book by curator Koeli Mukherji. “The book will be a deep dive into his life, tracing his journey from childhood and attempting to trace the evolution of his style of calligraphy. He is a man of few words and, therefore, although his imagery is widely recognized, few people know what shaped her work,” says Koeli.

Parameshwar Raju has passed the pandemic-induced lockdowns up to his neck at work. The result is a new series on Adi Ganesha, the Ramayana and the Aum; he also reworked a series from 2013 illustrating the story of Jesus: “I had made a series of Jesus stories for an exhibition in Delhi in 2013. When I revisited them, I felt the need to polish the pictures. The new designs are complex with more elements. This story had to have a different look and feel to represent a different time and community.

For those who are familiar with his work and his numerous illustrations of any series, be it the Ramayana, the Puri Jagannadh series, the Dasavatara or the Shiva Purana, it may seem that he is working on a series from beginning to end. , only resting when he’s finished telling a story. However, the artist reveals that his approach is non-linear: “I read about a subject and think about how I can tell an event in a simplified calligraphic form. Once I understand how the feather should move for a character, I add elements to give the series a distinct texture. I can’t work on a streak all at once.

He cites the example of how he started drawing the Aum and he lent himself to a series on Hanuman: “I was drawing the different representations of Aum and I came across how I could work on the shape of Hanuman.”

A drawing of the Nandi and an image of Hanuman at the court of Ravana are examples of his minimalist works. On the contrary, there are other richly detailed stories. The calligraphy depicting Kartikeya flying on a peacock to circumnavigate the globe while Ganesha circles his parents Shiva and Parvathi under the gaze of sage Narada is an example of this.

Devoid of facial features and expressions, bold calligraphic strokes are left to convey emotion, and they do so evocatively. An image of Ganesha dancing and drumming is joyful to behold.

A retrospective showcase on the different series of Parameshwar Raju is planned at the Museum of Sacred Art of Belgium. In the meantime, the artist has started working on new series on the Buddha and the Mahabharata: “I am also planning a series for children, which will have simplified drawings,” he explains.

Later this summer, when Koeli Mukherji’s book is ready for publication, In Divine Rhythm will be presented as a physical exhibition accompanying the launch of the book in different cities.

(In Divine Rhythm is visible until February 28 on art.kunstmatrix.com/)

Artist ambassador of peace, conveys a message of love through his art: Curator