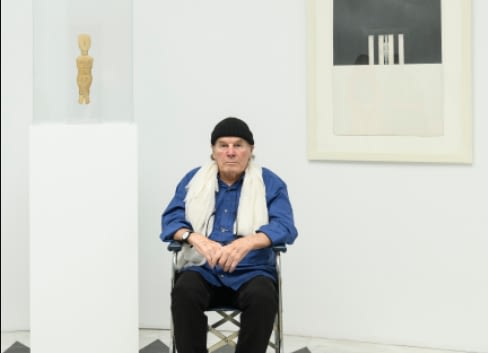 ATHENS – As part of the Divine Dialogues series of exhibitions, American artist Brice Marden presents his work in dialogue with a selection of antiquities from the Museum’s permanent collections, as well as three new works created especially for the exhibition. Entitled Brice Marden and Greek Antiquity and organized by the Museum of Cycladic Art in close collaboration with artist and curator and artist Dimitrios Antonitsis, the exhibition runs from May 20 to August 29.

This is the first museum exhibition dedicated to this renowned artist to be held in Greece. It presents 44 drawings, paintings, paintings on marble and notebooks which present a wide range of his artistic production, revealing his keen eye, his abstract gaze and his resonance with the metaphysics of the ancient Greek heritage. His works are presented in dialogue with 16 antiques selected by the curator in conjunction with the artist.

Over a career spanning six decades, Marden continues to fascinate viewers with the gestural simplicity of his paintings and drawings. His work draws from the long history of art, combining elements of minimalism, abstract expressionism, as well as ancient calligraphy and poetry. For more than fifty years, the artist has been inspired by the Greek landscape and Antiquity. His relationship with Greece dates back to 1971 when he first traveled to Hydra with his wife Helen, also a painter. Enchanted by the light and transformed by “the art of ancient civilisations”, they bought a house there two years later. Since then, they have spent part of almost every summer there together. The purity of the Hydra landscape has deeply marked Marden, who is inspired by the observation of nature.

The 16 antiquities exhibited alongside Marden’s works have been selected by the curator, in collaboration with the artist, from among the Museum’s collections of Cycladic, Cypriot and Ancient Greek art. Intended for daily, ritual or funerary use, these clay, marble and gold objects date from the end of the 4th millennium BC to the Byzantine period.

Curator of the exhibition, Dimitrios Antonitsis, said: “I concentrated on listening to this esoteric game that Marden set, fifty years now, on Hydra. My litmus test for selecting these antiques was for them to serve Marden’s balancing act of surface, design and light. I am convinced that the ancient artisans of the exhibited art objects were in touch with the invisible and the transcendental – this is precisely the way Marden works too: by creating a syntax of forms thought through artful observation and painting .

Visitors should experience this exhibition as a continuum through ancient Greece and minimalism. Even today, in a closet in the artist’s house in Hydra, there are groups of postcards of ancient Greek sculpture – their paper now faded and yellowed by time – with captions in archaic language. In this exhibition, I have attempted to reverse the terms of the “closet” in which Marden’s ancient Greek references are stored: the Stathatos Mansion becomes a “cabinet” in which the works of the greatest living minimalists are lovingly displayed. »

Divided into sections according to the choice of medium, the exhibition presents seven paintings on marble, including three new pieces. The most notable of this group of works is Hydra View, 2011-2012, a large marble diptych that for several years adorned the walls of Hydra’s historic Boudouris Mansion in Avlaki, Hydra.

In the early 1970s, Marden launched two series, Tribute to Art and Souvenir of Greece, in which he glued postcards of works of art and architectural monuments from Greece into wax-drawn elements of bee and graphite. Using a razor blade, he cut a void so that the surface of the glued card stock remained flush with the top of the drawing paper and therefore a flat plane.

Throughout his career, Marden has used exercise books to record ideas and images for future reference. So his notebooks from the early 1970s reflect his travels in Greece, with everything from mundane details such as phone numbers and hotel addresses to studies of mountains, sea and light. For this exhibition, the artist has selected eight notebooks from the 1960s and 1970s, overflowing with drawings and notes. One includes preliminary drawings for his monumental painting Thira, a series of paintings resulting from his study of how doors and windows are kept semi-closed by the people of Hydra. Two related paintings given by the artist to his daughters are also on display: Thira Souvenir I and Thira Souvenir IΙ, both from 1980.

Two works incorporate organic materials: Lingam on Eucalyptus, 1992, an ink drawn on a piece of eucalyptus bark from trees that grow on the ridge between Vlychos and Kiafa on Hydra; and Grove Addenda (Delphi), 1973, a graphite drawing and collage of a single olive leaf glued to paper. These works suggest a shamanic quality, reaching for abstract thought by connecting directly with nature.

Exhibited here for the first time, a series of charcoal drawings on paper Αrchesl Water-Hydra (1-8), 1975, depict the artist’s observation of the waves surrounding Hydra.

The exhibition is accompanied by a catalog in English and Greek.