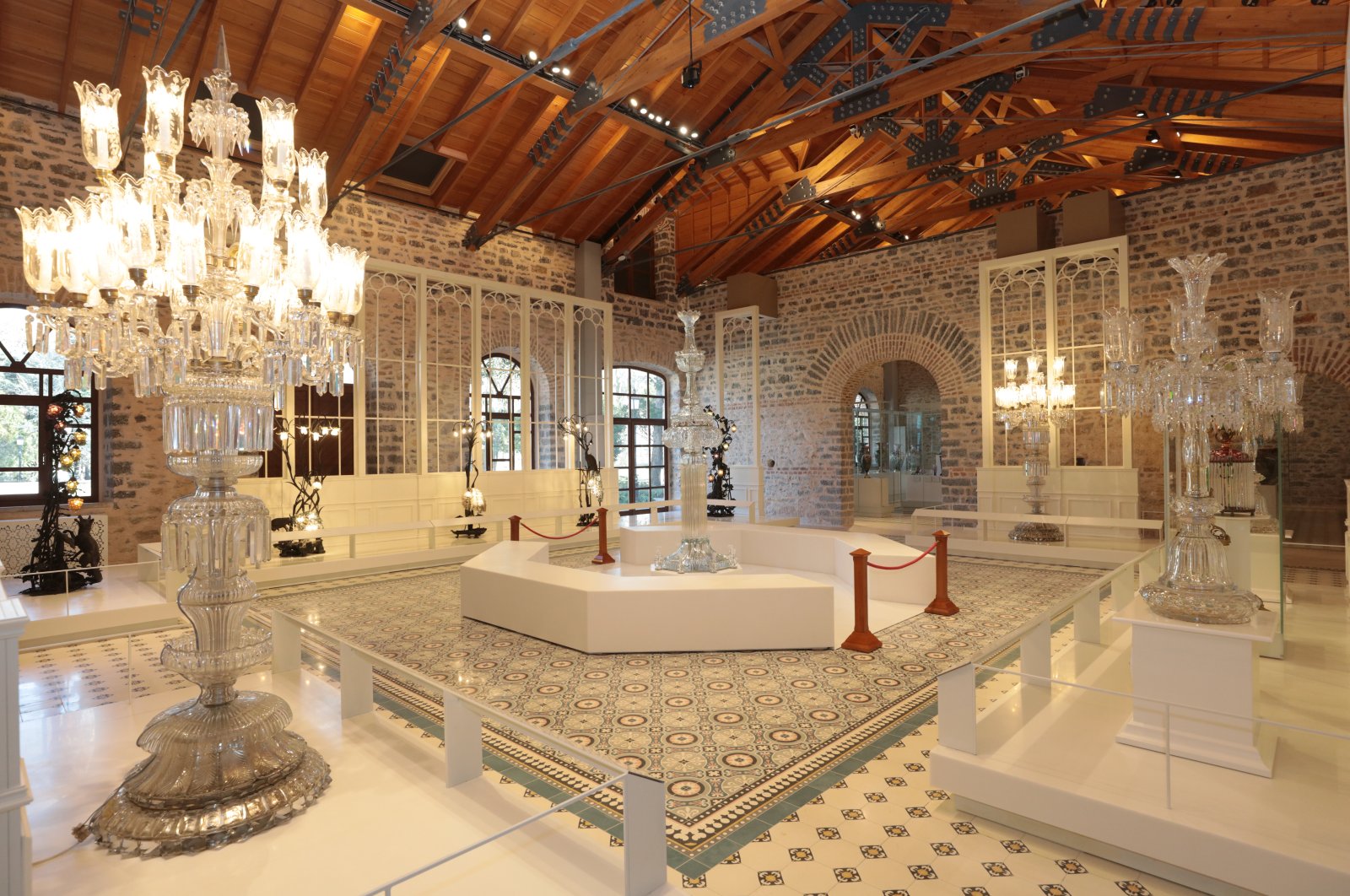 When one thinks of glass art, places such as Venice and Bohemia come to mind. However, Istanbul, the heart of many traditional arts, has been the center of its own unique style of glassmaking that synthesizes East and West. In the Ottoman Empire, the state paid great attention to the manufacture of glass; glass thus gained a significant place among the Ottoman arts. As is the case with palaces and mansions, glamorous glassware has been used in the windows and chandeliers of mosques, the heart of spiritual life. For example, 16 glassblowers worked on the construction of the Süleymaniye Mosque, the masterpiece of the famous Ottoman architect Sinan in Istanbul. French traveler Joseph Pitton de Tournefort, who traveled through Ottoman lands between 1700 and 1702, praised the new Sultan Ahmed Mosque (Blue Mosque) and its pleasant crystal balls, branch chandeliers and ostrich eggs, traditionally used to ward off spiders.

As the “Seyahatname” (“Travel Books”) of Ottoman traveler Evliya Çelebi recounts, glassmakers occupied a distinct place among the artists of old Istanbul. They included masters who made items for use in everyday life as well as artists who made unique items that had artistic value.

The art of glass rooted in the Ottoman era would gradually change as the empire moved towards the West. During the reign of the Ottoman Sultan Selim III, who ascended to the throne in 1761, a Mevlevi dervish named Mehmed Dede, who adhered to the Sufism of the Sufi philosopher Mevlana Jalaladdin Rumi, was sent to train in glassmaking in Venice by order of the palace. Dervish Mehmed was among the students sent to Europe by the Ottomans amid interest in developments in the West.

This artist stayed in Venice for a while and learned how to make opal glass. On his return, he established a glass workshop in Beykoz, then in a village near Istanbul and later in a district of the city. Probably due to his skill in the force of spiritual love in his heart, Mehmed brilliantly shaped his glass and his reputation grew. His glass artwork often resembled Mevlevi caps, reflecting Rumi’s spirituality. Although Sultan Selim III died in a domestic upheaval, he rendered a great service to Turkish glass art.

During the reign of Sultan Abdülmecid, who ascended to the throne in 1839, a glass factory named Beykoz Cam ve Billurat Fabrika-i Hümayunu (Beykoz Imperial Glass and Crystal Factory) began to operate in the region. It was followed by many glass workshops in Beykoz, to the point that the adjective “Beykoz işi” (work of Beykoz) was born. Glassworks used in Islamic holy places in Mecca were also made in Beykoz. Glassworks similar to “Beykoz işi” have been observed in a large area stretching from Iran to India. Beykoz has become the eponymous name for glass, although its fame has waned nowadays.

Beykoz, with a rich past, currently houses a comprehensive but relatively recent glass museum. The Beykoz and Crystal Museum, inaugurated by the Presidency of the National Palaces in the restored former stables of Abraham Pasha Grove, houses a glittering world behind its doors.

The museum is made up of 12 thematic sections which house 1,500 pieces representing all kinds of glassware. In the museum, which contains exhibits from different palaces and museums in Turkey, in particular Topkapı Palace, one can trace the making of glass in Turkish history through sparkling and magnificent examples. These works, dating from the 13th to 19th centuries, reflect the broad cultural codes of Ottoman and Turkish art while revealing its interaction with the West when needed.

The oldest artifact in the Beykoz Glass and Crystal Museum collection is the 700-year-old glass plate found during excavations of the Kubadabad Palace of Alaeddin Keykubad, the ruler of the Seljuk Sultanate of Rum. Also known as the “Kubadabad Plaque”, this work, adorned with enamel and gilding ornaments, is dated between 1237 and 1246.

Another important artifact is the ceremonial coach of Sultan Mahmud II, which is notable for the amount of crystal used in its manufacture.

Almost unscathed Mamluk chandeliers, chandeliers adorned with ancient Turkish calligraphy, colorful and tinted Ottoman artwork known as ‘revzen’, glass objects inherited from Ottoman sultans such as Sultan Abdülhamid II and examples glass from Europe are other distinctive items on display at the museum.

The Beykoz Glass and Crystal Museum is also home to a particularly fun glass workshop for children, in addition to a library that serves as a source for those who want to learn more about glass art.

Resplendent in its natural beauty, the museum is nestled in the hills of Beykoz, appealing to those who want to enjoy a unique cultural atmosphere outside of Istanbul’s most famous historical places.

Keep up to date with what is happening in Turkey, its region and the world.

Mississippi toasts the art of Andrew Bucci on his centennial