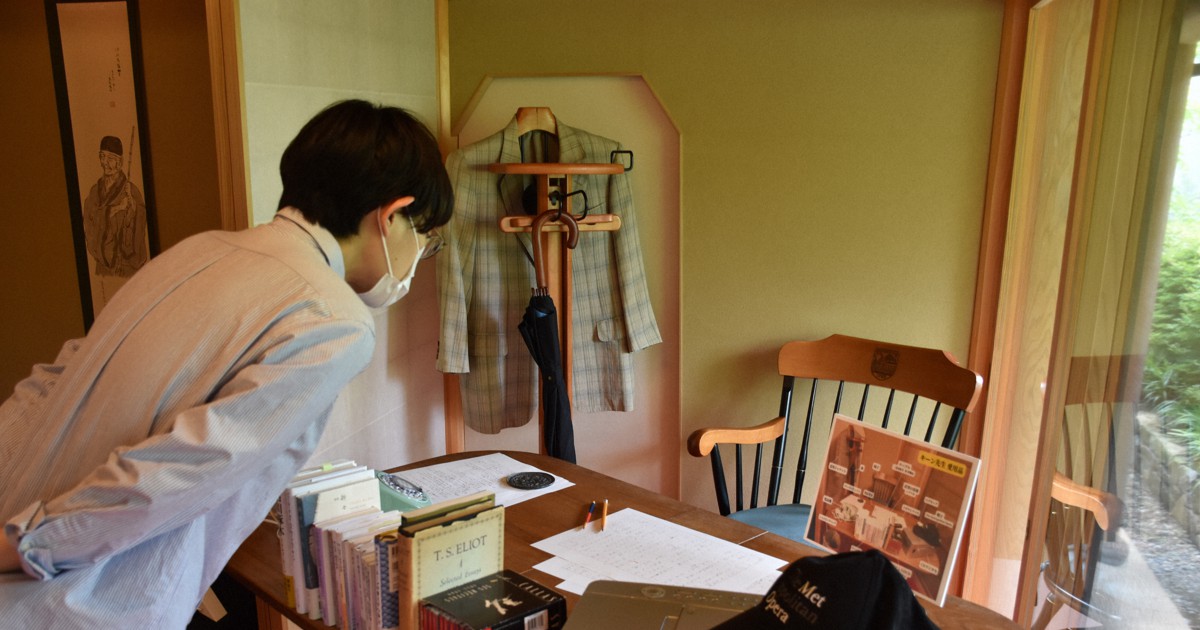 SOKA, Saitama — An exhibit in the city of Soka in Saitama Prefecture, north of Tokyo, celebrates the birth month of the late Japanese literary scholar Donald Keene through a collection of photos and artifacts that show his connection to the city, as well as a 17th-century haiku master.

The “Exhibit on Donald Keene’s Connections to the City of Soka” is held in the city’s “Zenso-an Hakutai no Kakaku (Travellers of a Hundred Ages)” facility. Since his first visit in 1988, Keene had continued to visit the city for about 30 years, giving lectures and participating in other events. What brought the city and Keene together was haiku poet Matsuo Basho’s major work “Oku no Hosomichi” or “The Narrow Road to Oku”.

The Soka area was once a post town along the Nikko Kaido road, where many travelers including Basho passed through or stayed during the Edo period (1603-1867). Several centuries after Basho’s epic journey, Keene translated the work into English. According to Keene’s translation, a passage reads: “I continued my journey to a post town called Soka which we could hardly reach on the day of our departure.” Keene named the installation Zenso-an using the kanji characters from this passage.

In addition to Keene’s photos from his visits to Soka, there are works on display using Matsuo Basho’s motif. This includes hanging scrolls and framed papers, which are collaborations between Keene and her adopted son Seiki’s brother, Kiro Uehara. Some of the works are said to include sketches based on Kiro’s imagination of what Keene would look like if he were Matsuo Basho.

Also in a corner of the traditional one-story wooden building is a table Keene received as a gift from the wife of Yukio Mishima, one of the renowned Japanese writers Keene befriended during his lifetime. . A cassette player and CDs of his favorite opera singer Maria Callas, which were borrowed from Keene’s Tokyo home, along with a Metropolitan Opera cap, books and a replica of his manuscripts were placed on the table, with his umbrella and his jacket hung up. the nearby wall. It was as if the scholar himself was sitting in the chair with his beloved objects close at hand.

Yoshio Soai, general manager of the Soka City Cultural Association, which hosts the exhibit, was responsible for picking up Keene from his Tokyo home ahead of an event at Soka. He said that although he was extremely nervous about meeting the eminent scholar for the first time, he relaxed when he opened the door and saw a familiar-looking statuette of Basho – a trophy awarded to winners of the city’s literature prize, which Keene also helped establish.

Soai commented, “Although I remember being scared and thinking Keene was out of my league, I saw him smile sweetly whenever he joined events around town where students were reciting chants. passages from Oku no Hosomichi. The photos of him on display also show this charming side of him.”

The exhibition will continue until June 27, with the installation open from 10 a.m. to 4 p.m. Free entry. The Zenso-an facility is a five-minute walk from the east exit of Dokkyodaigakumae Soka-Matsubara Station.