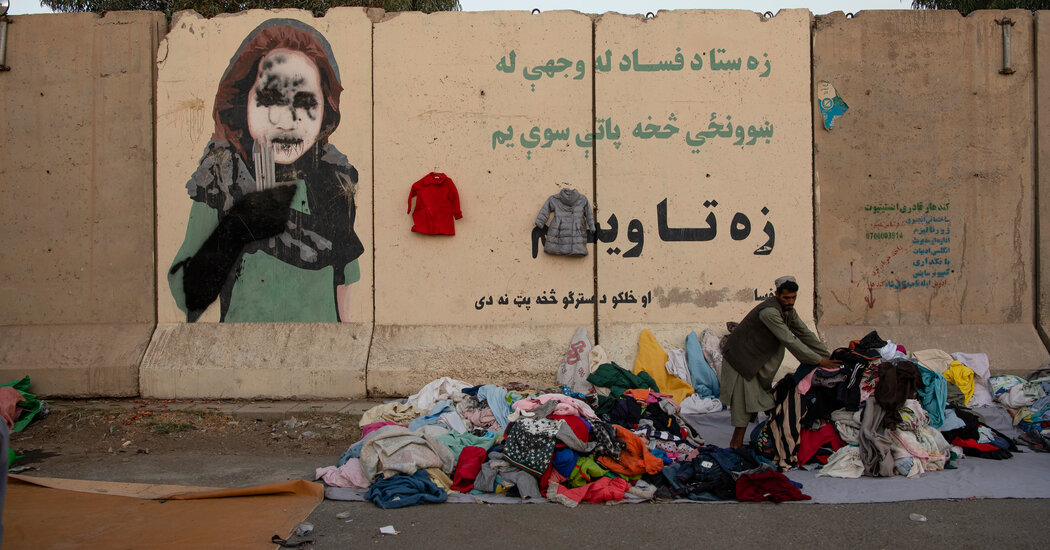 On the day that Afghan President Ashraf Ghani fled and handed the country over to the Taliban, Omaid Sharifi was in downtown Kabul, helping his colleagues paint murals on the wall in the governor’s office. By noon, panicked employees in nearby government buildings flooded the streets, some jumping into cars, others pedaling bicycles or running home or to the airport.

Mr Sharifi, 36, decided to leave his job unfinished, asking his colleagues to pack up the painting tools and go to the office.

The Taliban seized the country’s capital a few hours later. Mr. Sharifi stayed at home for a week, until he and his family were evacuated to the United Arab Emirates on August 22.

Since the Taliban’s return to power, hundreds of artists – actors, comedians, singers, musicians and painters – have fled Afghanistan, according to estimates provided to the New York Times by several of them. Some have resettled in the United States, France or Germany, while others are waiting in third countries, not knowing where they will be allowed to live in the long term.

Most left because they feared for their lives; others simply did not see a future in the country and were sure that they could not continue to practice their art and feed their families.

Under the new government, there has been a concerted campaign to remove works of art from all aspects of life, with the aim of making society more Islamic, the Taliban said. In doing so, the group is erasing two decades of craftsmanship that flourished after the fall of its first government in 2001.

The Taliban closed music schools and covered public murals. Radio and television stations have stopped broadcasting songs, as well as musical and comedy programs. The production of Afghan films has almost completely stopped.

“The future of art and culture looks bleak,” Sharifi said from Virginia, where he and his family have relocated. “It is not possible for the Taliban to live with art.”

It took more than seven years for ArtLords, the organization led by Mr. Sharifi, to paint around 2,200 murals, mostly on blast walls, in Kabul and elsewhere in the country, promoting messages of peace. , human rights and gender equality, among others.

But the Taliban called these colorful murals propaganda from the previous government. Less than three months after taking power, they painted most of them in white paint and replaced them with religious poetry or pro-Taliban messages.

â€œIt’s like losing a child. I feel like part of my body has been cut off, â€said Mr. Sharifi. â€œWe painted in the scorching sun and the freezing winter. We were threatened at gunpoint, but we continued to paint.

The Taliban have not officially imposed any national restrictions on artistic activities. But they have also shown no sign that their government will allow art as a form of free expression in the society they wish to lead, and their actions so far predict an uncertain future for thousands of artists. .

The Taliban “believe that art is a path to corruption and vice in society,” said Samiullah Nabipour, the former dean of the school of fine arts at Kabul University. Mr Nabipour said he had lived in fear in hiding for two months before he and his family were evacuated last week.

“The ideology of the Taliban is against art,” he added.

But the Taliban rejected this, saying their government will not oppose art until it violates Islamic laws.

â€œWe will define the status and position of music and art once the Islamic system is fully formed,â€ Zabihullah Mujahid, the Taliban’s chief spokesperson, told The Times. “Anything that has been forbidden in Islam will be dealt with on the basis of Islamic teachings, and we will oppose it.”

Afghan artists fear that the Taliban’s harsh interpretation of Islam will mean that almost all art forms will be banned, except calligraphy, religious poetry, and certain literatures.

Mr. Mujahid told The Times after the Taliban took power in August that they viewed music as “forbidden” by Islam, but hoped to persuade people not to listen to it rather than listen to it. force.

Even before the Taliban returned to power, life was not easy for Afghan artists. They have been constantly harassed, threatened and intimidated by conservative and hard-line clerics and their supporters, and even by insurgent groups, not to mention the struggle to earn a stable income that artists around the world endure. With the Taliban in power, those still in the country believe their lives as well as their careers are now in danger.

After the fall of Kabul, some artists hid the works they had created or owned. Others were so scared that they destroyed their paintings, sculptures or musical instruments.

â€œI deleted all of my music and songs from my phone and I’m trying to stop talking about music,â€ said Habibullah Shabab, a popular singer from southern Afghanistan who performed on â€œAfghan Star,â€ said a singing show similar to “American Idol”. . “

â€œWhen I’m alone listening to my songs, my previous videos and my memories, I cry a lot in my heart where I was before and where I am now,â€ he added.

Understanding the Taliban takeover in Afghanistan

Who are the Taliban? The Taliban emerged in 1994 amid the unrest following the withdrawal of Soviet forces from Afghanistan in 1989. They used brutal public punishments, including flogging, amputations and mass executions, to enforce their rules. Here’s more on their origin story and their record as leaders.

Who are the Taliban leaders? They are the main leaders of the Taliban, men who have spent years fleeing, in hiding, in jail and dodging American drones. Little is known about them or how they plan to rule, including whether they will be as tolerant as they claim. A spokesperson told The Times the group wanted to put their past behind them, but there would be restrictions.

Mr. Shabab now runs a vegetable stall to feed his family of nine.

The Taliban banned music and movies when they ruled the country in the 1990s, severely punishing those caught breaking the ban. Other forms of artistic activity or entertainment were also prohibited. They detonated two iconic Buddha statues in central Bamiyan province that had been carved into a mountain in the 6th century, and they smashed thousands of small carvings.

But after the overthrow of their first regime with the US-led invasion, art and entertainment experienced a dramatic resurgence, funded largely by international donors. Production companies started producing movies and TV series, and a new generation of comedians and singers rose to fame, entertaining millions of people. Graffiti art, which did not exist in Afghanistan before 2001, has flourished in urban areas.

Now, seemingly overnight, the arts scene is gone and many fear the new government will punish them for their critical views.

The Taliban promised more tolerance and freedom when they entered Kabul in August. But on Saturday, Taliban fighters raided a wedding reception in eastern Nangarhar and killed three people for playing music, witnesses said. The Taliban confirmed the attack, but condemned the gunmen and said they had been detained.

Artists have not forgotten the Taliban’s long history of such attacks. â€œThe roots of art dried up when the Taliban came to power in the 1990s,â€ said Roya Sadat, an award-winning Afghan filmmaker.

Ms Sadat traveled to the United States for a working trip in May, but was unable to return to Afghanistan due to deteriorating security. She is working on a scripted film about the political activities of Afghan women in the 1960s; the original plan was to shoot it in Afghanistan, but now she’s looking for other locations.

“It is sad to see the future of the country without art and without artists,” said Sadat.

Whether these artists can continue their work in new countries is another open question.

Some say they are optimistic about their ability to compete in the markets of their new countries. Mr Sharifi said he had previously registered ArtLords as a charity and limited liability company in Virginia. Ms Sadat said she was working on films, including a documentary, and performing for the Seattle Opera.

Many artists continue to work on unfinished projects for the organizations that hired them in Afghanistan. Others have been sponsored by universities or nonprofits to participate in short-term programs, just to get them out of the country safely. But what awaits them after these projects end is unknown.

Mr Nabipour, the former dean of fine arts, said he was invited by Harvard University’s Art, Film and Visual Studies program to work as a research assistant professor for 10 months.

â€œI have no idea what to do or what can happen after 10 months,â€ he said. “I am really worried about this.”