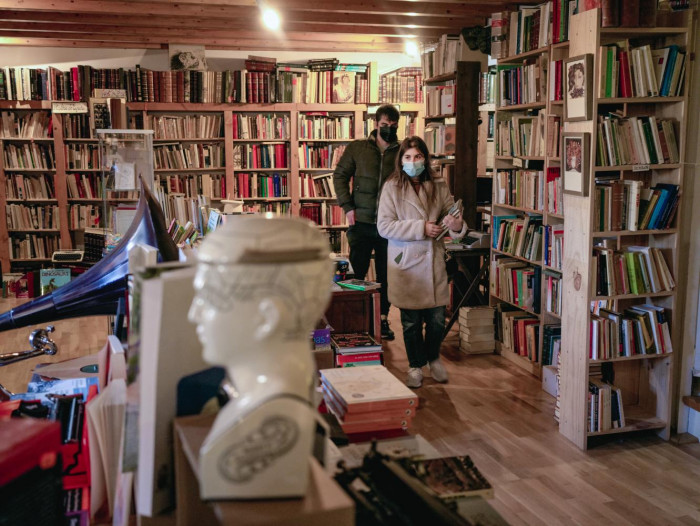 The Paramo bookstore in Uruena, Spain, which sells a range of second-hand books. photos: SAMUEL ARANDA/nyt

Standing on a hill in northwestern Spain, Uruena overlooks a vast, windswept landscape of sunflower and barley fields, as well as a famous wine estate. The walls of some shops are built directly into the 12th century ramparts of the village.

Despite its rugged beauty, Uruena, like many villages in the Spanish countryside, has struggled in recent decades with an aging and declining population that has left it stagnating at around 100 full-time residents. There is no butcher or baker; both have retired in recent months. The local school has only nine students.

But for the past ten years, a thriving business in Uruena: books. There are 11 stores that sell books, including nine dedicated bookstores.

“I was born in a village that didn’t have a bookstore and where people certainly cared much more about farming their land and their animals than books,” said Francisco Rodriguez, the mayor of Uruena, 53 years. “This change is a bit strange, but it is a source of pride for a small place to have become a cultural center, which now also certainly makes us different and special compared to other villages around us.”

The attempt to turn Uruena into a literary center dates back to 2007, when provincial authorities invested around 3 million euros (109.9 million baht) to help restore and convert buildings in the village into bookstores and build a center exhibition and conference. They offered a symbolic rent of 10 euros per month to people interested in running a bookstore.

The plan was to keep Urueña alive with book tourism, modeling it on other rural literary centers across Europe, including Montmorillon in France and Hay-on-Wye in Britain. Hay has long hosted one of the continent’s most famous literary festivals.

Children play on stone letters in Uruena, Spain, describing the village as the “Villa del Libro” or “the city of the book”. SAMUEL ARANDA/nyt

Spain has one of Europe’s largest book publishing markets, fueling a network of around 3,000 independent bookstores – and double that if you include stationers and other places that sell books. But about 40% of bookstores have less than 90,000 euros in annual turnover, which amounts to operating “a subsistence trade”, according to Alvaro Manso, spokesperson for Cegal, an association which represents independent bookstores in Spain. .

“The trend is one where size matters and more very small bookstores will disappear,” as they have done in other countries where book sectors have consolidated, Manso said. To help small businesses compete, Spain’s Ministry of Culture this month allocated €9 million in grants to the book sector to modernize and digitize.

The survival of this huge national network of bookstores in Spain, where readership levels are not particularly high, is “one of the great paradoxes of this country, but I think we live in a kind of book bubble”, said Victor Lopez-Bachiller, owner of a bookstore in Uruena.

Because the rent is low, Mr. Lopez-Bachiller said, he can stay afloat financially by selling a range of second-hand books, ranging from classics in Spanish, such as Pedro Paramo – hence the name of his store – to comics like Tintin. His shop also features around 50 models of old typewriters said to have been used by writers such as Jack Kerouac, JRR Tolkien, Karen Blixen and Patricia Highsmith.

Mr. Lopez-Bachiller, 47, is one of around a hundred inhabitants of the village, mostly retirees.

Tamara Crespo, a journalist, and her husband, Fidel Raso, a photographer, bought a house in Uruena in 2001, ahead of an effort to turn the neighborhood into a literary hub. They also run a bookstore there now.

“I think being here is not just about wanting to have a free bookstore, but also about having a certain way of life and building a community,” said Ms. Crespo, whose shop focuses on photojournalism.

One of his few complaints is that some other booksellers only open sporadically, mainly on weekends when they know there will be more visitors, even though the investment plan stipulates that their stores must open at least four days a week.

She also noted that the population of the village has continued to decline slightly over the past two decades, even as Uruena has transformed into a magnet for book lovers.

Mr Rodriguez, the mayor, acknowledged that becoming a tourist destination did not guarantee that more full-time residents would move in and keep the village alive. The recent retirements of traders are further proof of this.

“It’s very unfortunate, but we just haven’t found anyone from the younger generation here willing to take over as the new butcher,” he said.

Morning bread and meat are now delivered from a nearby town.

The unfavorable demography of rural Spain – a phenomenon now known as “Spain vaciaor “empty Spain” – will present a permanent challenge of survival, the mayor predicted.

Nevertheless, the bookshop’s initiative paid off.

Uruena was selected for the grants because of its scenic location and quaint buildings – and because of its relatively easy-to-reach location. It’s off a motorway in northwest Spain, just over two hours’ drive from Madrid and around 30 miles from the medieval town of Valladolid.

People walk along a street in Uruena, Spain. SAMUEL ARANDA/nyt

The Uruena tourist office recorded 19,000 visitors in 2021, even in the midst of the coronavirus pandemic. Officials say the actual number was much higher because many day trippers don’t stop at the office. The village also receives around 70,000 euros per year of public money to organize cultural events such as calligraphy lessons, theater performances and conferences.

Isaac Garcia, who has a bookshop in Uruena specializing in film publications, had previously lived with his partner, Ines Toharia, just outside Hay-on-Wye, Wales’ book haven. The couple jumped at the chance to have their own bookshop in the heart of Spain.

“We felt we could combine a great business with a dream lifestyle in the countryside, but this time in our home country,” Garcia said. “Hay, of course, has had a lot more time to mature and establish itself as a literary center, but I think we’re getting there in Uruena, bit by bit.”

They sometimes use the back wall of their store to screen movies, but their attempts to schedule outdoor movie nights in the village have proven tricky.

Even before the arrival of bookstores, Uruena had cultural attractions.

Longtime resident Joaquin Diaz is a Spanish folk singer and ethnographer. Mr Diaz, now 74, moved to Uruena from Valladolid in the 1980s and lives in an old building where he has amassed an extensive collection of traditional instruments, books and recordings. His house was turned into a museum by provincial authorities three decades ago.

“I am realistic and I don’t believe in getting too nostalgic,” he said of the loss of traditional shops and crafts in villages like Uruena. “Overall, life is much easier now in the Spanish countryside than 50 years ago, and no one could ever imagine that books could one day be sold and help save this village when I arrived here. .”