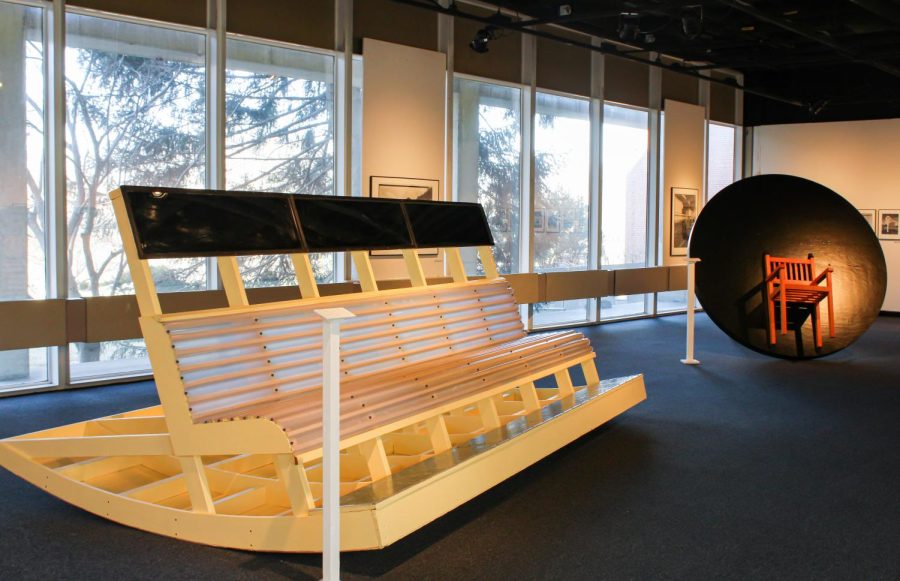 “The University Museum currently only has our North Hall open. The South Hall opens February 1, which is next Tuesday,” said Weston Stoeger, curator of the University Museum. “Three exhibits are on display in the North Hall, two of which are generated from the university’s Museum Zone collection and one of which is from retired faculty members of the SIU’s Art and Design and Film Photography programs .”

“Dan and Jerry have come together to put together a truly unique exhibit,” Stoeger said.

Overturf’s art has not been shown to the public prior to this exhibition, but Monteith’s art has been exhibited in previous museums, Stoeger said.

According to the SIU website, the Continuum Gallery displays contemporary and historic fixtures created for a church.

They noticed the light fixtures he and fellow curator Susannah Munson explored in the museum’s archives, Stoeger said.

“We had some really cool, interesting, and different lighting features from around the world,” Stoeger said. “We thought it would make a really interesting exhibit associated with the faculty retreat.”

Stoeger and Munson chose the name of the gallery Curator’s Choice Passages.

“These are just collections of [more] rarely seen works that feature doors, hallways, and some kind of passage through something,” Stoeger said.

The Southern Illinois Gallery features local plant and animal artifacts found and some native to the area, Stoeger said.

Some of the artists show the history of the Southern Illinois community with Works Progress Administration (WPA) artifacts, Stoeger said.

“It was a government program that was responsible for doing things like building giant city-state parks and doing a lot of the road building here,” Stoeger said. “They also made models for the university museum as teaching pieces.”

The Big Muddy Film Festival will be organized alongside the Saluki Gallery. The film festival will show selected films to the public for the first time, according to the SIU website.

“They show independent films, and it’s a juried competition,” Stoeger said. “So people submit to it, their films are selected and they are shown in one of the many theaters in the city.”

This year, most film screenings will take place at the Varsity Theater for a few days, Stoeger said.

The Mid-Century Modern Gallery was an exhibit tied to the School of Art and Design and the University Museum, Stoeger said.

Stoeger said he is also linked to a conference where retirees and alumni return to Carbondale to take lectures and attend various events around town.

“It gives art and design graduate students the chance to meet professionals in this industry,” Stoeger said. “And this exhibition will design sketches that the [Art and Design] The department has recently been paired with mid-century modern furniture from the museum’s collection.”

In the West Gallery Women’s Voices 2 opens to the public Feb. 1 and features art from 24 local female artists, Stoeger said.

“We worked with a guest curator, Teresa Fix, to help create this group and launch this exhibit,” Stoeger said. “Each exhibition presents a whole new list of people. No one is a repeat, and it’s an annual exhibit every spring that the museum holds.

“So we’re going to spotlight a group called the Flying Black Medics, who came to Cairo, Illinois, in late 1969 and left in early 1970,” Stoeger said. “[They] provided medical care during the riots and unrest that were taking place there.

A new tapestry that is part of one of the University Museum’s new exhibits hangs in the South Hall on January 25, 2022 at the SIU in Carbondale, Illinois.

According to the SIU website, the Study Gallery will host the It’s An Honor exhibit on SIU alumnus Dr. Cho-Yee to highlight some of his gifts to the university museum.

“It’s a stripped down exposition of what we did last semester with more information about the donor himself,” Stoeger said. “It will provide the viewer with a story of why they are interested in calligraphy, [and] why he wanted to come from China to study at Southern Illinois University.

“Animals are an ubiquitous art form. All cultures have some sort of animal iconography,” Stoeger said. “We’ve got stuff in there from tribes from Mexico, Vietnam, Nepal… New Guinea, China, Africa and I’m thinking Egypt as well.”

Receptions and artist talks for the exhibitions are to be announced as the Museum works with organizers to hold these events in February and March, Stoeger said.

Monteith and Overturf provided insight into how their art complements each other for Mitchell Gallery.

Monteith’s sculpture, Tuckasegee Rocker, was an element of Carpenters and Other Good Men made in 1995 for the Museum of Contemporary Art in St. Louis, according to the description of the sculpture.

Monteith’s inspiration for the sculpture was his late father Olin C. Monteith who owned a barber shop and his uncles Andrew Queen and RL Haskett who were both builders.

David’s Dream is Monteith’s other sculpture made in 1992 for the Eagle Gallery at Murray State University, according to the description of the sculpture.

The piece is inspired by the Wall family, Monteith’s childhood neighbors. It symbolizes David’s journey around the world as a child with an intellectual disability.

“I thought both pieces would work well in this space,” Monteith said. “At the end of the day, I think it’s a really great show. [I like] the combination of our two works and the way they interact with the space.

Monteith describes his works as stories about the home and the people in his life, he said.

“[I’d] pick a topic you know, quite often something about my dad or some of my relatives or people I used to know,” Monteith said. “I would nominate those sculptures that reflected my interest, respect and interaction with those people I knew.”

Monteith does not see the exhibit as a symbol of his retirement from the University, he said.

“I’m sure we’d both be okay showing where it started,” Monteith said. “It’s just the idea of ​​us kind of, you know, officially cutting ties and going back to our private lives.”

Monteith appreciates the images in his art and the moments in his life they depict, he said.

“I just think it’s really interesting visually,” Monteith said. “I mentioned my interest in people from my background and this work which has kind of a background story and I think Dan is very drawn to this place as well.”

Daniel Overturf’s art collections consist mainly of photographs from 2021 and some older ones that have never been exhibited before.

“There are quite a few subcategories or collections in the show,” Overturf said. “There are two sets that were mostly flash shot last year in 2021, and many of them were shot last fall.”

Overturf said the collections can be clearly separated by their different looks.

“There is a black and white vertical set [of] structures, kind of what I consider my own take on postcards from southern Illinois,” Overturf said. “I got to know different small towns and places in southern Illinois and made mental notes of them for years.”

Many photos from the exhibit will be featured in a book being published by SIU Press, Overturf said.

“I think artists and creatives, writers and musicians and people like that, they might be some of the people who find retirement to be one of the easiest transitions they’ll ever experience,” said Overturf.

For artists, they continue to make art after retirement, but not on a teaching schedule, Overturf said.

Overturf said working with Monteith on the exhibit was a great way to bring together their artistic styles and what they learned as professionals and teachers here at SIU.

“I photograph a lot of places and things,” Overturf said. “So I admire the form, I admire [the] form, and admiring many diverse aspects that Jerry is eager to discuss in his work.