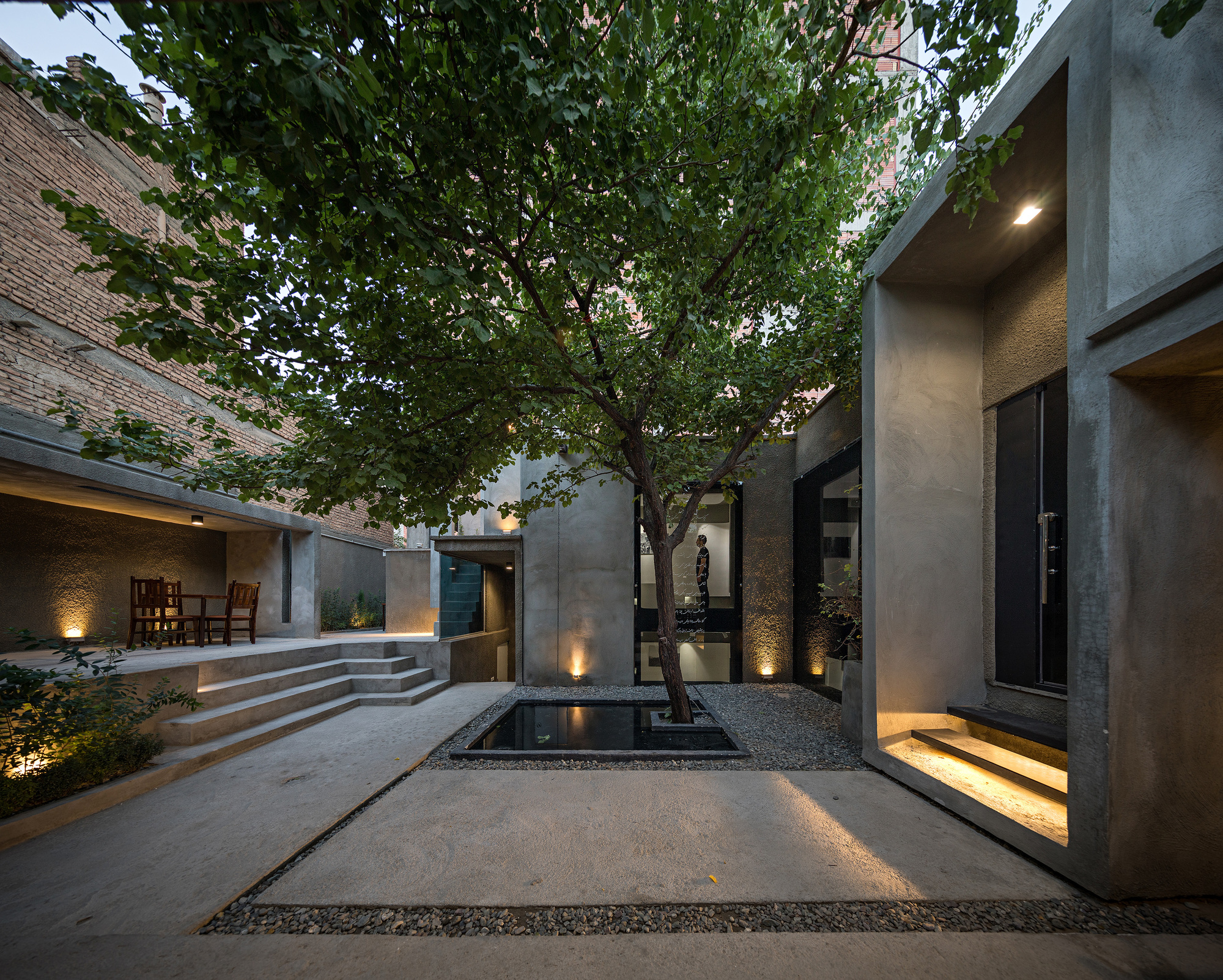 Text description provided by the architects. House 1330 in the Kurdish town of Mahabad started from a 70-year-old house and has an area of ​​around 270 square meters. This house had residential use before and has a different story behind it. Part of the old building was built 70 years ago, but during the reconstruction process, clues were found that the adobe bricks in some walls date back over 100 years. Over the past seven decades, due to changing lifestyles, homeowners have removed or added parts of the building to meet their needs.

The new use of the house came to life with the support and investment of the private sector, led by a woman, to preserve the building and create a new space to disseminate the culture and art of Kurdistan. The strength of the project was the creative division of spaces and the definition of uses in the design process so that the spaces could have a new and different definition of their past. For example, Zhirkhan, which was used as a residential area in the past and in winter, has turned into a warehouse over time and has been revived as the main gallery space by increasing its height now. Any items removed from the building (such as warehouses) or added (such as awnings and stairs) were used only to facilitate optimal use of space or to respond to climatic conditions and to control and direct precipitation.

The uses had to be diverse and heterogeneous to create a combination of diverse functions and meet the needs of the neighborhood today, which is why the complex was divided into a cafe and a cultural / artistic section that work together. Crossing a 13 meter long corridor we reach the central courtyard of the house, which acts as a flexible and functional central core and brings together a combination of fixed and variable spaces such as music and the collective living space around from her and led the audience to the central core of Zhirkhan, the gallery spaces and finally the entrance to the cafe and a small movie theater, respectively.

The cultural and artistic part of this house is at the heart of new collective experiences. Upon entering house 1330, the music scene is adjacent to the central courtyard and is a comfortable place to listen to Kurdish music, which has been formed to support Kurdish singers or musicians. For young people who have been deprived of a cinema in their city for 20 years, there is a small space called a small cinema room to show films next to the cafe. Due to the lack of art gallery spaces in this city, the four main rooms of this house are dedicated to supporting artists in the exhibition or sale of their works and to providing special support to women and groups. socially disadvantaged, such as female prisoners.

Finally, the cafe restaurant allows you to taste the unique taste of Kurdish cuisine cooked with local vegetables, with female staff who want to be a model for other young girls in the region, despite the restrictions and the traditional view of working in the region. Coffee. There is also a small library in the cafe to share books related to art and literature. The roof of this house is a symbol of the modern spirit and the modern use of this complex in the traditional body of the building, which will be used for holding events in the future. The shape of the roof entrances is inspired by the architectural literature of the region, which is reminiscent of the staircase architecture of the Horaman region.

The 1330 House project tries to come up with a construction method that achieves the following objectives: 1- Inexpensive construction and the use of local materials that are economically advantageous for the employer so that the range of construction materials pays homage to the old building and reduce transportation costs 2 – Use of material (cement plaster) with three special techniques to control costs and create visual beauty and no need of executive expert for each method 3- Preserve and strengthen previous layers and add a new layer 4 – Reconstruction and reuse of old buildings instead of destroying them. In other words, we tried to listen more instead of talking. Listen to the needs of the client and their community, as well as what the building is saying about their bed. In doing so, we sought to identify additional structures as an important historical layer and as a vital embodiment of Mahabad’s often overlooked contemporary civic life.

Why is this project valuable? Mahabad is a city with temporarily forgotten art shops (like teaching calligraphy) and “Hazhar” is a sacred name among culture and art lovers. The design team tried to create a new style rooted in the history, culture and art of the city. Mahabad, which has seen fewer inhabitants migrate to large cities for cultural and economic reasons compared to neighboring towns and which has a large number of literate people and artists, needs more cultural and artistic spaces with the growth of the younger generation. Having a “café” for a woman is a break with tradition in this city. This space is called the 1330 house.

Our client’s priority was the freedom and safety of women in a traditional society because the cafes in this city are a male space and women are only a small part of this society and there is no special place for cultural or artistic activities for women. She wanted to offer women a new place to experience a new lifestyle and enjoy a new sense of experience in the cultural space. Of course, the presence of women in cultural and artistic spaces can probably be seen as a return of their presence in the social arena. We attribute the success of the project, despite its limited financial resources, to creating an atmosphere which, as users say, has become a promising place in the city and they are proud to have it in their city. A place of daily encounters as well as a rare place in the city to create a new community that combines young and old generations, in other words, a revitalization based on communication.

Linguistic and cultural learning at the PCAL Fall Festival